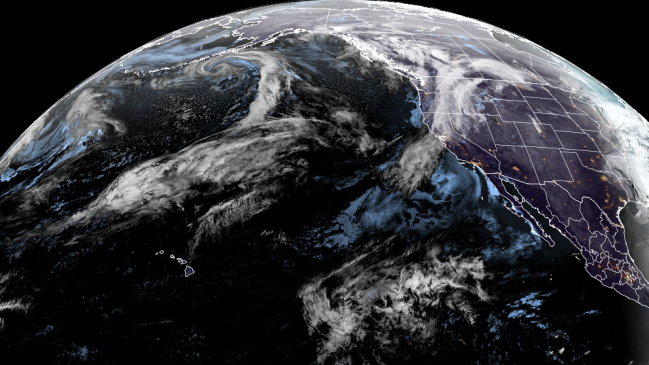 This satellite image shows storms tracking across the Pacific and toward North America as of early Tuesday, March 15, 2022 (NOAA GOES-WEST)

The unsettled weather pattern that has been impacting the Northwest this week is set to continue. Another large storm is forecast to take aim at the region this weekend, just in time to put a damper on the official start of spring, AccuWeather forecasters say.

Rain is forecast to persist across the Northwest Tuesday, particularly along the Interstate 5 corridor, with the heaviest rain causing localized flooding Tuesday night. With freezing levels fairly high, between 4,000 and 6,000 feet, there can be some disruption over the passes.

After a short lull, the bigger event is expected to arrive this weekend and is expected to feature cold air, high winds, rain and snow for higher elevations.

“The first day of spring may start on Sunday, but Mother Nature has other plans for the West Coast,” said AccuWeather Meteorologist Alex DaSilva, explaining that a powerful storm is expected to move into the Northwest Friday night.

Steady rain could even arrive as early as late Friday afternoon in western Washington and Oregon, and high temperatures could drop into the lower and middle 50s Saturday.

“The storm will bring a chilly air mass with it and will allow for snow levels to drop below pass level in the Cascades,” DaSilva said.

“Snow levels Saturday will be between 3,000 and 4,000 feet [in elevation] and by Saturday night they could drop below 2,000 feet in some areas,” added DaSilva, who noted that snow is likely to make travel difficult Saturday and Saturday night in the Cascade passes.

Rain and showers could stretch from Central California to the Canadian border Saturday, with snow in the mountains. The heaviest rain is forecast to fall from Oregon to Central California with some localized flooding, as well as some snow, in Donner Pass.

With the steady rain, the Skokomish River near Potlatch, Washington, is yet again forecast to rise into minor flood stage Saturday. Seattle is another location where the rain could cause problems, as the city is currently at 123% of average rainfall so far this year.

“By Sunday the storm will dive south into the Southwest, bringing mountain snow to the Sierra Nevada and rain to coastal areas,” DaSilva said.

Rain and gusty winds are expected to extend to Southern California as well as parts of Arizona, Utah and Colorado.

Temperatures will tumble about 5-10 degrees Fahrenheit below average across the Southwest Sunday and Monday, according to DaSilva.

“While any rain will be welcome across the drought-stricken Southwest, this storm won’t bring nearly enough precipitation to put a dent in the drought,” said DaSilva.

Over a quarter of the West is in extreme drought, particularly in Nevada with 36% of the state experiencing these conditions, according to the United States Drought Monitor. Since the beginning of the year, Reno, Nevada, has received just 17% of its average precipitation.

DaSilva also said that he’s more concerned with the gusty winds associated with this storm, especially considering the ongoing drought.

“The storm will bring strong winds to the Southwest on Sunday which can lead to an elevated fire risk,” he said.

The combination of dry, drought-ridden vegetation and gusty, fire-fanning winds can be incredibly dangerous when it comes to wildfire development. Experts say residents should not throw cigarettes out of moving vehicles and be sure to extinguish outdoor fires properly.

“It is important this time of year for many areas across the Southwest to get rainfall, as the late spring and summer months are typically very dry across the region,” said DaSilva.

After impacting the West, this storm is expected to move into the Rocky Mountains and Plains by early next week, bringing snow to the Front Range and northern Plains and even some severe weather in the southern Plains.