Locally Severe Storms To Erupt Across Southeastern US

Some of the storms could become severe, with the potential to spawn isolated tornadoes and hail.
By Alex Sosnowski March 15, 2022
Facebook
Twitter
Linkedin
Email 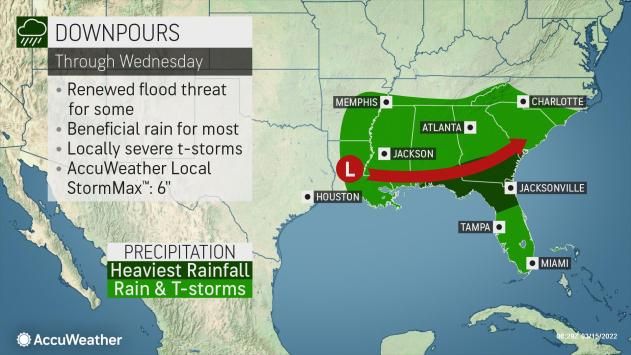 Since the storm is associated with a pocket of cold air in the middle layer of the atmosphere, thunderstorms could produce hail. (AccuWeather)

A slow-moving weather system will unleash disruptive downpours and thunderstorms across Louisiana and to the Carolinas and Florida into the end of this week, and some of the storms could become severe with the potential to spawn isolated tornadoes and hail, AccuWeather forecasters warn.

Storms that erupted farther west from the same storm system late Monday and Monday night from Texas to Louisiana produced incidents of hail and gusty winds but stopped short of producing widespread damaging winds. Reports on the hail ranged in size from 1 inch in diameter, or quarter-sized, to 1.75 inches in diameter, which is the approximate size of a golf ball. A tornado is suspect as the cause of damage Monday evening in the town of Leonard, Texas, located about an hour northeast of Dallas.

The same sort of setup is likely over the Southeast region through at least Wednesday and perhaps right through the end of the week.

“The main threats from the storms will be from torrential downpours that can produce localized flash flooding, but there can be a small number of severe thunderstorms capable of producing a tornado or waterspout,” AccuWeather Chief On-Air Meteorologist Bernie Rayno said.

An influx of both Gulf of Mexico and Atlantic moisture will help to fuel intense downpours that can deliver local rainfall rates up to an inch per hour. A general rainfall of 1-2 inches is forecast through Wednesday evening, but where downpours persist for a few hours or repeated storms hit, an AccuWeather Local StormMax™ of 6 inches is possible.

AccuWeather forecasters urge motorists to stay alert and exercise caution when driving in torrential downpours. It is important to avoid driving over flooded roadways since water may be much deeper than it appears. Travelers could run into poor visibility and travel slowdowns along interstates such as 4, 10, 75 and 95.

Just days after a waterspout came ashore as an EF0 tornado in Fort Myers, Florida, sending beachgoers fleeing to safety, parts of the Sunshine State will be at risk for severe weather again. Some of the cities at greatest risk for severe storms into Tuesday evening include Pensacola, Tallahassee, Tampa and Orlando. Meanwhile, areas farther west like Mobile, Alabama, will also face the dangers of severe weather.

Since the storm is associated with a pocket of cold air in the middle layer of the atmosphere, thunderstorms could produce hail. The cold air allows the hailstone to grow in size at a swift pace. The thunderstorms can then drag that cool air down to the surface, making it easier for the hailstone to survive the trip to the ground at a significant girth.

On Thursday, there will be two separate areas at risk for severe thunderstorms as the weather system progresses to the northeast. North Carolina and Virginia will be in the path of potentially damaging thunderstorms. Across areas to the north of the thunderstorm zone, steady rain could drench St. Patrick’s Day activities, such as the annual parade in New York City.

The other severe weather zone may push southward over the Florida Peninsula Thursday. The same risks ranging from spotty flooding downpours to hail, gusty winds and perhaps an isolated tornado will continue in the Southeast.

Even in storms that do not turn severe, lightning will post a significant threat. People are urged to have a way of receiving all storm-related watches and warnings and to seek shelter at the first rumble of thunder.

Just as the storm system that will act as a trigger for the thunderstorms shifts offshore, a new system will approach from the west late this week. A few locally severe storms may erupt as early as Thursday afternoon and evening in portions of northeastern Texas, eastern Oklahoma, southern Arkansas and western Louisiana.

On Friday, severe thunderstorms may ignite across a larger area that extends from the southeastern parts of Louisiana and Mississippi to southern Alabama, southwestern Georgia and much of the Florida Panhandle. Farther north, the same storm has the potential to produce a strip of accumulating snow from portions of Kansas to Wisconsin and Michigan Friday.

Looking ahead into next week, a stronger storm system is forecast to emerge from the Rockies. As this system moves eastward and encounters surging moisture from the Gulf of Mexico, combined with warm conditions, there is the risk of an outbreak of severe thunderstorms that could include a number of tornadoes in portions of the South Central and Southeastern states. The details will unfold in the coming days as to the timing and nature of the severe weather and flooding downpour potential.