As war rages on, Israel talks to both sides about cease-fire negotiations and humanitarian issues.
By Lee Bullen March 14, 2022
Facebook
Twitter
Linkedin
Email 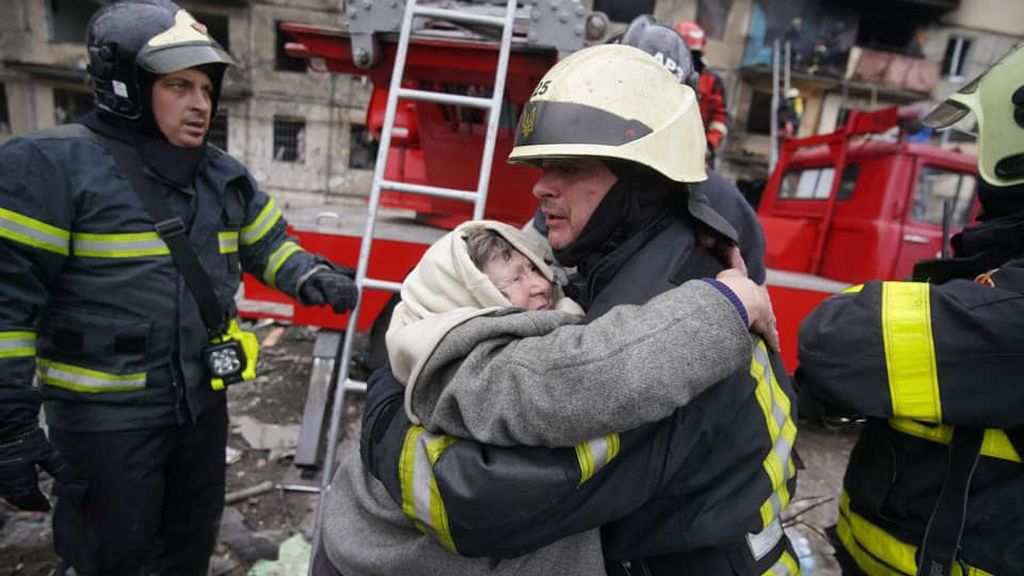 A firefighter comforts a woman in this screenshot from a video as he and his fellow emergency service worker help people escape from buildings hit by Russian Army shelling in the Obolonskyi district of Kyiv, Ukraine. (@MNS.GOV.UA/Zenger)

The grim scenes in the Ukrainian capital’s Obolonskyi District were shared on social media by the State Emergency Service (SES) of Ukraine on March 14.

The Ukrainian authorities said two dead bodies were found under the rubble and that three people from the building fire were hospitalized. Another nine residents required medical assistance at the scene, and 63 people were evacuated from the area, the officials said.

The footage shows firefighters battling the blaze during the night and into Monday morning, as well as rescuing several residents and their pets.

Firefighters managed to extinguish the flames and provide assistance to residents trapped in their apartments or in need of medical care, the SES said. The search for more victims is ongoing.

As the Russian attacks continued, Ukrainian and Russian officials held a fourth round of negotiations via video conference. Mikhail Podolyak, an aide to Ukrainian President Volodymyr Zelensky, tweeted that “communication is being held, yet it’s hard.”

“The reason for the discord is too different political systems. [Ukraine] is a free dialogue within the society & an obligatory consensus. [Russia] is an ultimatum suppression of its own society,” Podolyak wrote.

After talking with Putin, Bennett spoke over the phone with Ukrainian President Volodymyr Zelensky.

Israel has been said to have good working relations with both Russia and Ukraine.

But Israeli Foreign Minister Yair Lapid has called on Russia to stop its attacks on Ukraine and end the conflict.

“Israel is like Romania — we condemn Russia’s invasion of Ukraine,” Lapid said after his meeting with Romanian Foreign Minister Bogdan Aurescu on Sunday, the Jerusalem Post reported. “[The invasion] has no justification, and we call on Russia to stop the shooting and the attacks and solve the problems around the negotiating table.”

“We are in full coordination with our ally, the US, and our European partners, to try to end this violent tragedy as quickly as possible,” Lapid said.

«Previous Post
Turkish Police Seize Highly Radioactive Californium From Man Trying To Sell It For $500,000»Next Post
VIDEO: Man In High-Speed Chase Avoids Jail, Despite Driving Without License Or Insurance