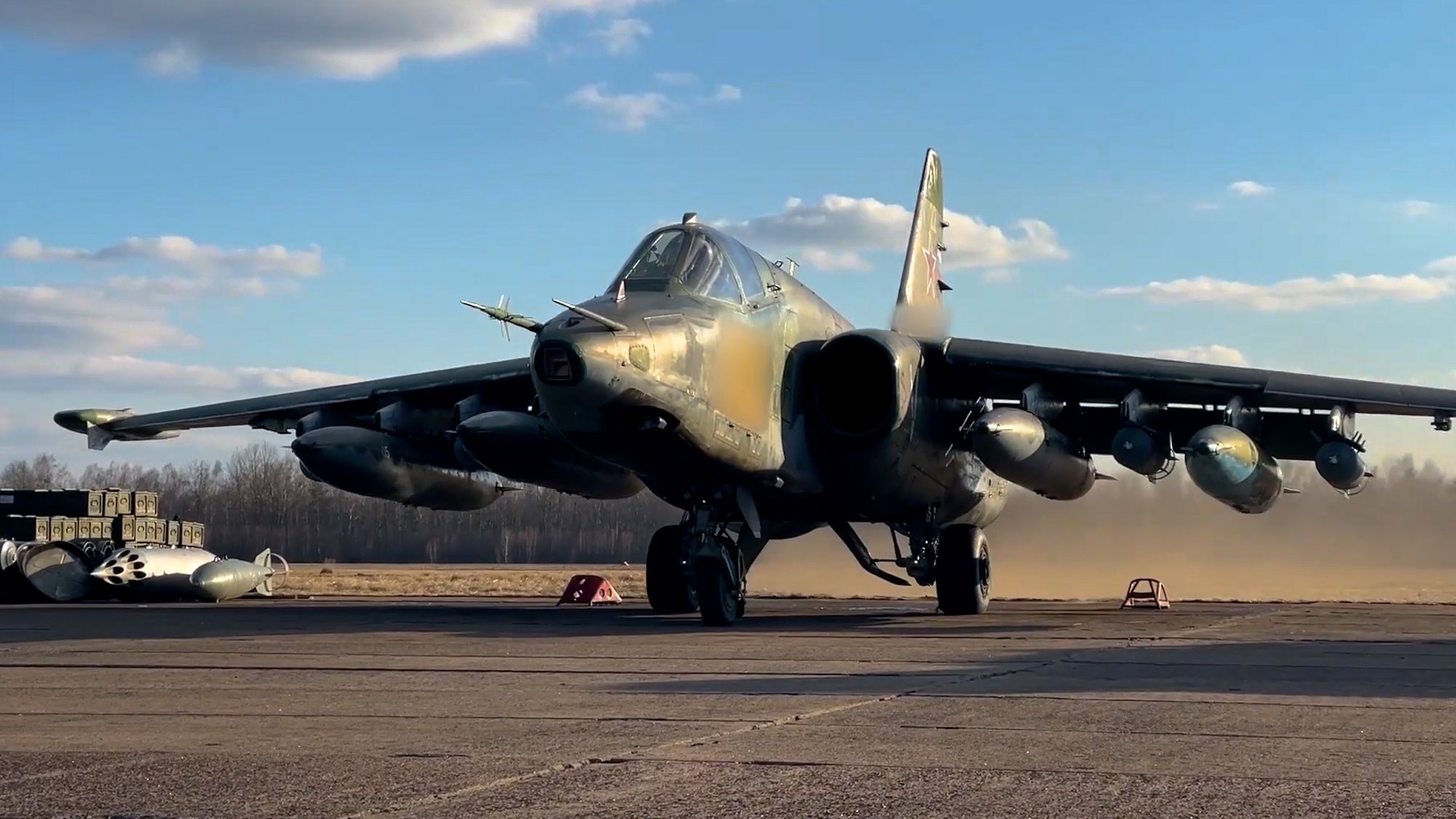 An assault aircraft of the Russian Aerospace Forces fighting in Ukraine is seen in a screenshot from a video. (Russian Ministry of Defense/Zenger)

A Russian military airstrike is depicted destroying a Ukrainian ammunition depot in a video shared by Russia’s Ministry of Defense, one of many of its forces’ attacks from the air on Ukrainian targets during a war now in its third week.

“The airstrike was delivered by a pair of Su-25 attack aircraft with missile weapons,” the ministry said in a statement accompanying the video.

Russian forces reportedly also shelled a block of flats and a factory in the Ukrainian capital, Kyiv, among other recent attacks.

In another video shared by the Russian Ministry of Defense, one of its drones is seen blowing up what they said was a Ukrainian missile system before returning to base.

The video was shared on YouTube by the ministry on March 13.

“A multiple-launch rocket system was destroyed by an unmanned aerial vehicle [UAV] of the Russian Aerospace Forces from a height of over 3,000 meters [9,843 feet] with precision-guided munitions,” the Russian Ministry of Defense said in a statement.

“UAVs in the special military operation are being used for reconnaissance, fire adjustment, as well as combat situations and the use of weapons against targets.”

The Russian invasion of Ukraine, dubbed a “special military operation” by the Kremlin, has resulted in at least 636 civilians killed and 1,125 injured as of March 13, according to the United Nations, with nearly 50 children included among the fatalities. The real number of casualties is believed to be considerably higher.

Ukrainian President Volodymyr Zelensky said his negotiators are trying to organize a meeting with Russian President Vladimir Putin as talks are set to continue on Tuesday.

Zelensky will deliver a virtual joint address to U.S. Congress on Wednesday, according to a letter U.S. House Speaker Nancy Pelosi, a California Democrat, and Senate Majority Leader Chuck Schumer of New York, sent to colleagues.

“Congress, our country and the world are in awe of the people of Ukraine, who have shown extraordinary courage, resilience and determination in the face of Russia’s unprovoked, vicious and illegal war,” the congressional leaders wrote.

U.S. national security adviser Jake Sullivan was scheduled to hold meetings with China’s top diplomat, Yang Jiechi, in Rome on Monday. Reports have surfaced that Russia has asked China for military equipment and aid since the war began. During a regular Chinese foreign ministry briefing on Monday, a ministry spokesman called the reports “disinformation” spread by the U.S.

«Previous Post
A 64-hour Mission To Save 2 Newborns In War-Torn Ukraine»Next Post
Turkish Police Seize Highly Radioactive Californium From Man Trying To Sell It For $500,000