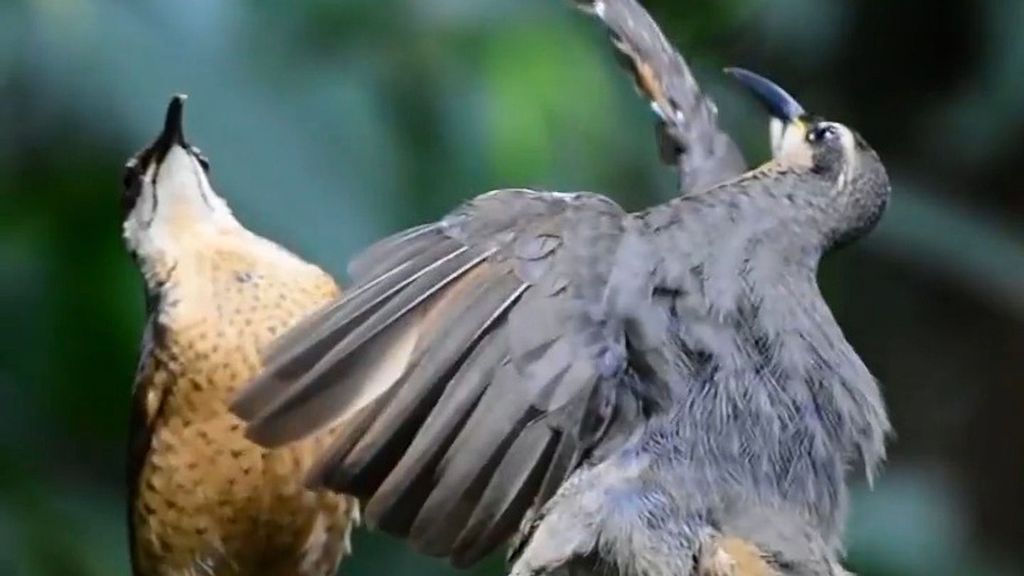 A juvenile male Victoria's riflebird failed to impress this female while practicing its mating dance. (@travelandwildlifephotography/Zenger)

An Australian bird performs an elaborate dance for an unimpressed female, who promptly flies off in search of a better match.

The video was shared on the Travel and Wildlife Photography page on Instagram by Australian residents Ray and Sue for their 25,000 followers.

The footage shows a Victoria’s riflebird engaged in a mating dance before being rejected.

Photographer and wildlife lover Sue told Zenger: “The video was recorded in February 2022. The Victoria Riflebird breeding season isn’t until September, but the juveniles will often start practicing early.

“These birds are endemic to the highland rainforest of tropical North Queensland, Australia. They are in the bird-of-paradise family. They select a post, such as a fallen tree, and will dance on the same post for as long as it stands.”

The riflebird inhabits northern Queensland and is easily noted for its loud, repeated hiss. One of just a few birds-of-paradise in Australia, males are the striking members of the species. Their black plumage is a deep iridescent purple with flashes of brilliant turquoise running across their heads, chests and tails. The riflebird is the smallest member of the species; it measures between 9 and 11 inches.

Sue says she feels lucky to live in Australia, given its vast array of wildlife. And while she and Ray have day jobs, their passion is exotic travel.

“We have day jobs like most people and save for our trips. One thing that helped us in the past was to plan our trip with a travel agent and we would make regular payments to them and pay the trip off before we left. This is a great idea if you have trouble saving,” Sue said.

Apart from Australia, their favorite trips have been camping in the Maasai Mara in Kenya and seeing the orangutans and tarsiers in Indonesia.

Their travel wish list includes the Falklands, about 300 miles off the coast of Argentina on the Patagonian Shelf, and Madagascar. The latter is east of Mozambique, west of Mauritius, and offers amazing wildlife, as well as flora and fauna. Madagascar is home to 11,000 endemic plant species, 80 percent of which are found only on the island.

Madagascar is also known for its lemurs, an endangered species on the verge of extinction, due to deforestation and poaching.

To shoot natural wonders, the duo use Nikon D800 and D7200 cameras, without filters, and perform basic editing in Photoshop.