Areas under the greatest threat of severe storms include the Dallas metro area as well as the Shreveport metro area in Louisiana.
By Alex Sosnowski March 14, 2022
Facebook
Twitter
Linkedin
Email 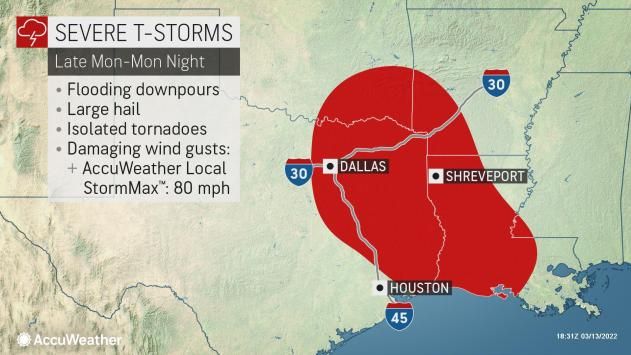 Depending on whether the storms continue on as a solid, fast-moving line of severe weather or take on more of a mass of heavy rain, locally gusty winds with thunder and lightning may determine if the system ends up being classified as a derecho. (AccuWeather)

As a small but strengthening dip in the jet stream pivots across the south-central and southeastern United States into the middle of the week, thunderstorms capable of producing severe weather and isolated tornadoes will increase from late Monday and Monday night, AccuWeather meteorologists warn.

Areas that will be under the greatest threat of severe storms include the Dallas metro area as well as the Shreveport metro area in Louisiana, about 185 miles east of Dallas. The strongest storms may stay north of Houston, but potent storms are still forecast to swing through the city and the Houston suburbs on Monday night, and all modes of severe weather are possible from Monday evening through early Tuesday.

The severe weather will also deliver a return of warmer air, bringing daily high temperatures back to normal or even a little bit above normal in Dallas after the city has experienced about a week-long stretch of below-normal high temperatures.

Even though Monday began with a lack of moist air over the Interstate 10 and 20 corridors of the region, humidity levels are forecast to surge through Monday night. This sharp increase in moisture can be a major factor in igniting severe weather.

Thunderstorms will spring up during the afternoon and evening hours over parts of central and northeastern Texas as well as southeastern Oklahoma. By Monday night, some of the storms will be capable of producing very strong wind gusts up to an AccuWeather Local StormMax™ of 80 mph, hail that could be the size of golf balls or larger, flash flooding and isolated tornadoes.

“A line of severe thunderstorms is likely to organize with this setup and move rapidly to the east and southeast at about 50 mph the first part of Monday night,” AccuWeather Senior Meteorologist Brett Anderson said. “Due to the narrow line structure and the quick movement of the storms,” Anderson added, “most areas should have about 15-20 minutes of severe weather activity.”

Depending on whether the storms continue on as a solid, fast-moving line of severe weather or take on more of a mass of heavy rain, locally gusty winds with thunder and lightning may determine if the system ends up being classified as a derecho.

In order for a storm to be classified as a derecho, damaging winds must occur along a consistent path for more than 240 miles, according to the National Weather Service (NWS). Should storms with damaging winds march all the way from northeastern Texas to southeastern Louisiana, or about 300 miles, that designation could be granted.

Derecho or not, the weather system promises to be a disruptive one, Anderson said.

“At the very least people in parts of Louisiana may find it tough to sleep with loud thunder and frequent lightning flashes,” Anderson said. Those on the roads overnight and perhaps in the New Orleans area on Tuesday morning could face some difficult travel due to downpours impacting visibility and triggering localized flooding. Temperatures in New Orleans on Tuesday are forecast to be in the low 70s, around normal for this time of year.

“The good news is that a large portion of the zone forecast to be hit by thunderstorm downpours is experiencing moderate to severe drought, so any decent rainfall should help that out,” Anderson said.

The same storm system will continue to push eastward on Tuesday and Wednesday.

“The threat of severe weather is not quite as high in northern and central Florida and the southern parts of Alabama and Georgia from Tuesday to Tuesday night, compared to Texas and Louisiana into Monday night, but the strongest storms certainly may trigger locally damaging winds a tornado or waterspout,” Anderson said.

Heavy downpours and localized flooding could lead to some travel problems in Alabama, Georgia and the Florida Panhandle, but the rainfall should also be beneficial in terms of long-term drought relief and bringing about a decreased wildfire risk.

On Wednesday, the risk of heavy to locally severe thunderstorms may tend to focus on the central and southern parts of the Florida Peninsula as the weather system continues moving eastward.

Following the severe weather threat into midweek, the atmosphere will reload and could nurture a new round of severe thunderstorms by this weekend from portions of the southern Plains to the Mississippi Valley and central Gulf Coast regions.