Temperatures To Skyrocket In Northeast As Wild Temperature Swings Continue

Springlike weather is ready to take over the Northeast this week.
By Jessica Storm March 14, 2022
Facebook
Twitter
Linkedin
Email 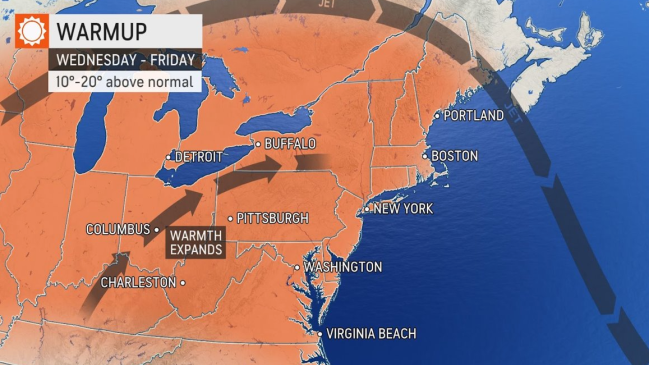 The recent bursts of warm weather have usually been accompanied by rain, but fortunately for the outdoor lovers this week, it's looking like dry weather for most. (AccuWeather)

In the wake of a disruptive snowstorm that left over a foot of snow in several New England towns and even a dusting along the Interstate 95 corridor, springlike weather is ready to take over the Northeast this week, making snow and frigid air seem like distant wintry memories as temperatures skyrocket.

Temperatures bottomed out in the teens and 20s Fahrenheit on Sunday morning after the potent storm rolled through the Northeast. Residents of the I-95 cities from Washington, D.C., to Boston woke up to shivering conditions with temperatures in the lower 20s.

Those lows occurred after temperatures rose into the 60s, 70s and even to 80 in spots about a week prior, on March 6 and 7, causing many Northeasterners to feel like they were riding a temperature roller coaster. And with the official first day of spring arriving this weekend, the temperature is about to climb upwards yet again.

The bitter cold produced a remarkable low of 9 degrees Fahrenheit in Pittsburgh at 7 a.m. on Sunday which is 20 degrees below the average for this time of year of 29 F. However, it will be a much different story later this week in the Steel City as highs in the 70s are forecast for Thursday.

“The wild swings in March will continue this week, and this round will be an upward trend, after a cold weekend, for much of the eastern U.S.,” said AccuWeather Senior Meteorologist Matt Rinde, adding that most areas from the southern Great Lakes to New England are expected to have highs in the 60s and even low 70s by Friday.

This flip back to warmer weather will bring one of the most consistent stretches of temperatures for cities such as Philadelphia since the middle of the fall. High temperatures in the City of Brotherly Love are forecast to settle in the 60s for much of this week and into next. The lone day when temperatures are forecast to be out of the 60s is this Friday, as AccuWeather meteorologists are predicting a high in the low 70s that day.

The recent bursts of warm weather have usually been accompanied by rain, but fortunately for the outdoor lovers this week, it’s looking like dry weather for most while temperatures rise up to 20 degrees above normal in places. This won’t be the case everywhere, however.

“Although it will be dry much of the time for most areas, a clipper system could produce a little rain and snow mix from New York to southern New England later Tuesday and Tuesday night,” said Rinde.

AccuWeather forecasters predict residents in areas from Detroit and Erie, Pennsylvania, to Boston and Portland, Maine, should keep an umbrella on hand, but it shouldn’t be more than a nuisance storm for most.

This likely won’t stop temperatures in several of these locations from rising around 5 degrees above normal or higher on Tuesday. Average temperatures are in the middle 40s for the Boston metro area this time of year, but temperatures are forecast to surge into the middle to upper 50s instead, and temperatures could continue to rise throughout the week.

“Another system could spread some rain from the Southeast into the mid-Atlantic on Wednesday and Wednesday night,” Rinde added. By Wednesday, temperatures are forecast to trend 30-40 degrees higher than their lowest levels from the past weekend.

Washington, D.C., and Baltimore could receive some rain early Thursday as showers spread northward. By the afternoon, the rain is forecast to expand into Philadelphia and New York City. Temperatures are expected to approach 70 F in the southern mid-Atlantic and settle into the lower 70s to the north on Thursday afternoon.

“During the middle part of March, average temperatures range from the middle to upper 30s in northern New England to the middle 50s and lower 60s around the Chesapeake Bay region,” said AccuWeather Meteorologist Reneé Duff.

Friday is expected to be the peak of the warmth for most across the region, with temperatures settling in the lower 60s in Boston to the upper 70s in Washington, D.C., which is over 20 degrees above average in places. Along with the temperature increase, the next big storm is expected to approach the region from the west.

After Friday, temperatures are forecast to moderate a bit as the storm moves through but could remain above average for some time across much of the region.