The 3 animals live in Yorkshire, England, and have bonded, despite their size.
By Arian Movileanu March 13, 2022
Facebook
Twitter
Linkedin
Email 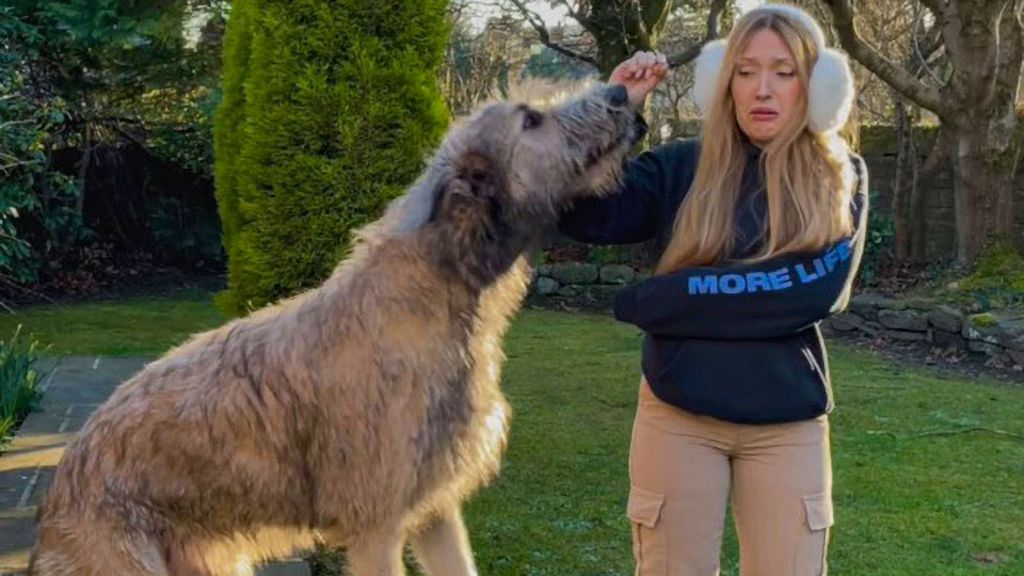 Before-and-after photos show three puppies in the first picture — and a later shot that shows one dog towering over the others.

The dogs are part-owned by psychology student Claudia Carter of Yorkshire, England, She manages the TikTok page Bruhpuppy and appears dwarfed by her pooch.

Her page has 59,200 followers and shows the exploits of her three dogs: Arlo, Bertie and Ernie.

Carter told Zenger that she and her family have had Arlo, who is 11 months old, for nine months. They got him from a reputable Irish Wolfhound breeder.

She said Arlo, seen in later pictures looming over his siblings, “currently weighs 172 pounds and is approximately 37 inches tall.”

Carter knew Arlo was going to be big, as his biological father and grandfather are large.

“Arlo eats approximately 4 pounds of food a day, and we feed him a raw diet,” she said. That diet typically includes organ and muscle meats, whole or ground bone, raw eggs, fruit and veg, and dairy products like yogurt.

Irish Wolfhounds have famously been described as “gentle when stroked, fierce when provoked.” This holds at least partly true for Arlo, who, according to Claudia, is “very much a gentle giant, he has never shown aggression.”

“Many people come over to meet and pet him. Others take photographs to show to their friends and family. However, sometimes people cross the road, as his size can be seen as intimidating.”

The Irish Wolfhound is a giant-sized dog, and the tallest of all breeds, according to the American Kennel Club, reaching the size of a small pony. Its build resembles a greyhound, only larger and stockier.

The breed is known for possessing a sweet temperament, but when provoked can run and kill larger animals. The Irish wolfhound takes about two years before it is fully grown and given its size, needs adequate space to run.

«Previous Post
Made In China: Researchers Recreate Trousers That Were Like The Versace Of The Ancient World»Next Post
Galapagos Giant Tortoises Alive Today May Actually Be A New Species, Scientists Say