A storm in the Northwest Monday through Tuesday night will cause slow travel and travel disruptions in many places.
By Jessica Storm March 13, 2022
Facebook
Twitter
Linkedin
Email 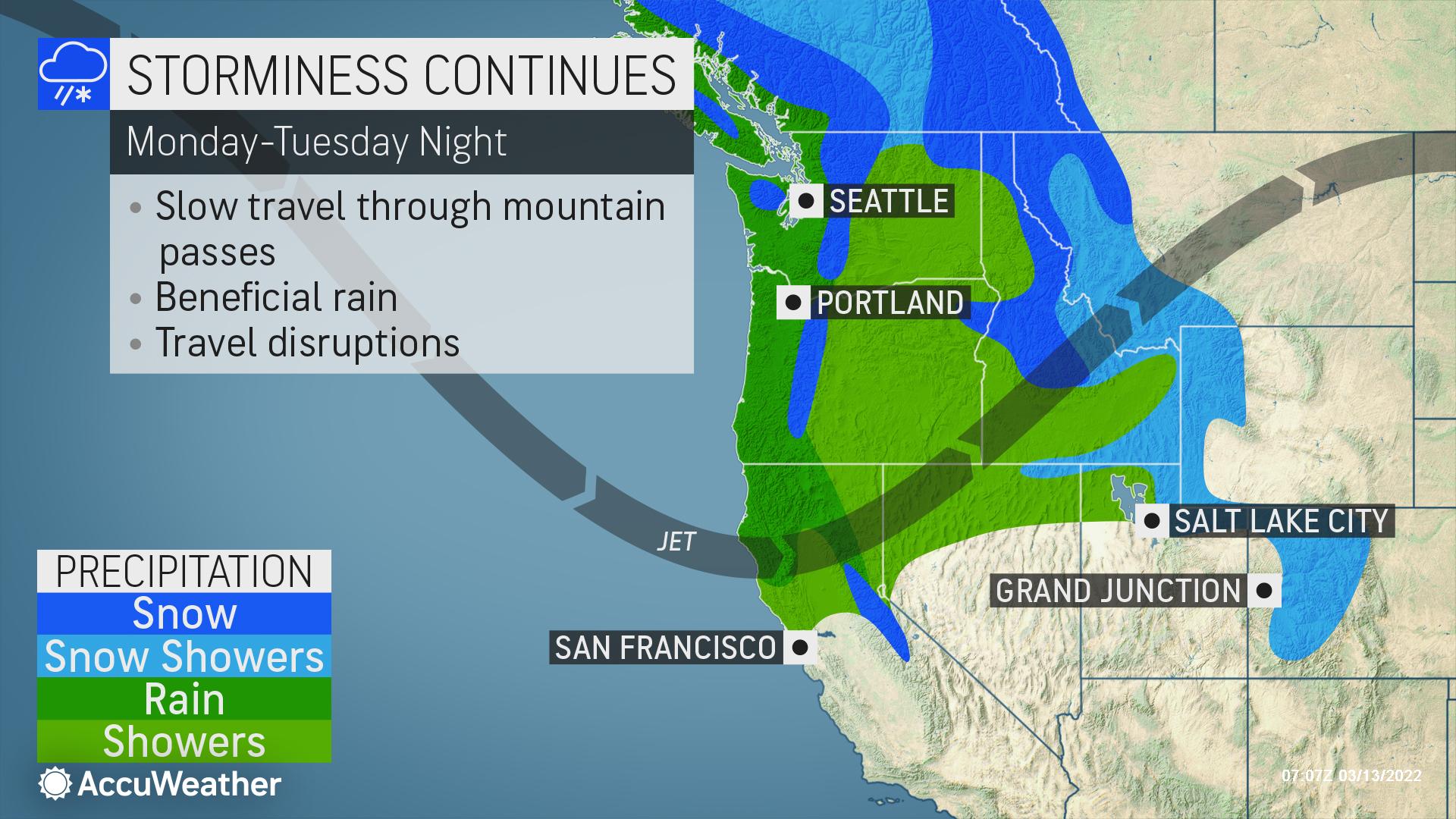 Another storm in the Northwest will kick off the workweek on Monday and Tuesday, bringing flooding rainfall, gusty winds and mountain snow. (AccuWeather)

After an initial storm roved the Northwest on Saturday, a second, stronger storm is expected to impact the region to kick off the workweek on Monday and Tuesday, bringing flooding rainfall, gusty winds and mountain snow.

Nearly a quarter of an inch of rain fell in Medford, Oregon, on Saturday as the first of two storms brought precipitation to the northwestern United States. This alone is well above this past February’s total precipitation of only 0.08 of an inch, despite the monthly average of almost 2 inches.

This has been the situation with several Northwestern cities, and March is nowhere near over with, at least one more storm is on the way. Heavy rain and mountain snow are forecast to continue on Sunday, and the situation is expected to ramp up as the workweek begins.

“Most of the jet stream energy is holding in Canada over a good portion of the week, but there are some dips into the Northwest U.S. that will include rain and mountain snow on Sunday, with a second round Monday into Tuesday,” said AccuWeather Senior Meteorologist Matt Rinde.

This second round will generally last from Monday through Tuesday night and will cause slow travel and travel disruptions in many places, particularly mountain passes. The National Weather Service (NWS) has already issued a hydrologic outlook for portions of western Washington, warning of rising rivers, and the Skokomish River near Potlatch is forecast to rise to minor flooding stage on Tuesday at over 16 feet.

“The storm center on Monday’s system will be along the Canadian coast, but the associated cold front to the south will be quite strong with heavy rain arriving later Monday into Monday night and then snow levels falling into the day Tuesday,” Rinde said, adding that the moisture will also extend into the northern Rockies Tuesday into Tuesday night.

Seattle, Portland, Oregon, Medford and Spokane, Washington, are all forecast to have locally heavy rain on Monday and Monday night tapering to showers by Tuesday. Rain is even expected in Northern California cities like San Francisco and Sacramento. On Tuesday, rain and showers are expected to arrive in places like Boise and Salt Lake City.

As for the Cascades, wintry weather is on the way with snow accumulations and high winds expected above 3,000 feet. The NWS has issued winter weather advisories for the mountain range, warning motorists that travel could be very difficult to impossible with high hourly snowfall rates. A smattering of high wind warnings and wind advisories have also been issued for parts of California, Oregon, Nevada and Washington.

“As the storm moves away from the West coast it will spread snow throughout the northern Rocky Mountains on Wednesday, then it will exit the Rockies and move out across the Great Plains on Thursday,” said AccuWeather Senior Meteorologist Michael LeSeney, explaining that snow Thursday and Thursday night in the Colorado Rockies is expected to accumulate a foot or so.

As for the Northwest, a break is in the forecast as the storm moves away, but residents should keep the rain and snow gear handy.

“There will be a lull in unsettled weather on Wednesday, but another round of rain and mountain snow could arrive Thursday into Friday,” said Rinde.

This active pattern will aim the steadier rain at Washington, with Oregon experiencing mainly showers on Thursday, but by the end of the day Friday, forecasters are predicting showers or even dry weather for most areas.

Unfortunately for the rain weary, AccuWeather long-range forecasters anticipate a more significant storm to arrive this weekend with plenty of moisture and colder air. Snow levels are forecast to dip below pass levels, disrupting travel yet again, and avalanche danger will likely be fairly high in the Cascades. Flooding rain in coastal areas is also going to be a concern. However, this active pattern is not without benefits.

“While this pattern can be disruptive to daily events it is good to remember that some areas are still under significant drought to which each raindrop or snowflake is beneficial,” said Rinde.

Over a quarter of the West is experiencing exceptional drought conditions, with the largest area of exceptional drought taking up half of Oregon, according to the United States Drought Monitor. While much of western Washington’s drought has receded, coastal Oregon and California are still hurting for rain.

Since the start of 2022, San Francisco has only reported 7% of the average, with Sacramento reporting a measly 1%. So far in both February and March, Sactown has only reported a trace of rain, as opposed to the 4.70 inches of rain the city usually has during those two months.

A double-edged sword, this stormy pattern will continue to bring dangerous impacts as well as beneficial moisture over the next week or so.