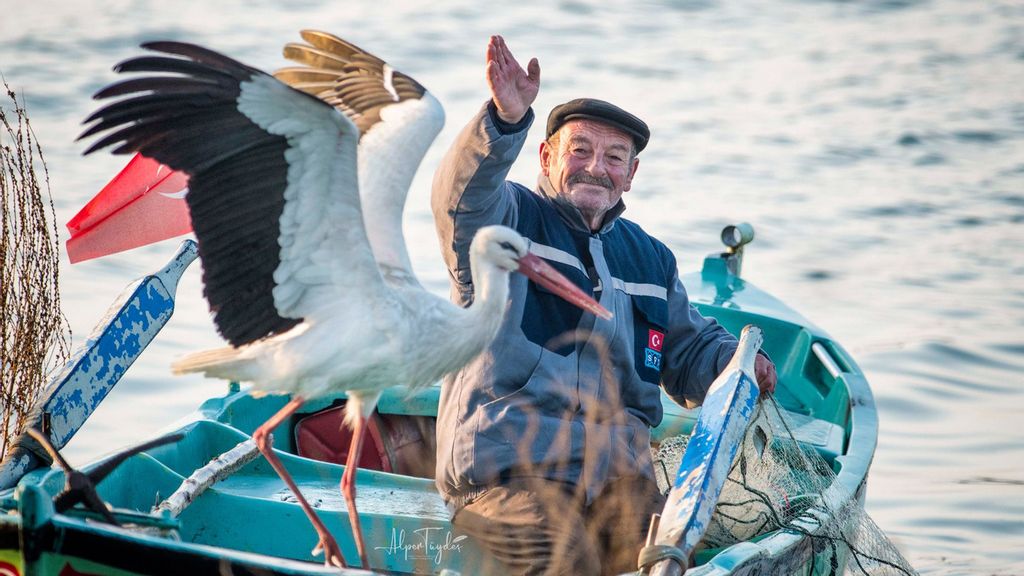 The stork named Yaren has visited the Turkish fisherman Adem Yilmaz in the village of Eskikaraagac for 11 years straight. (Alper Tuydes/Zenger)

A stork who became famous after a documentary was made about her unusual friendship with a Turkish fisherman has returned to visit her old friend for the 11th year running.

Yaren the stork’s return was eagerly awaited by all 12 households of the village of Eskikaraagac, located in Karacabey, in the Turkish province of Bursa. It finally happened this year on March 6.

The lake at Eskikaraagac is where the award-winning documentary “Yaren” was filmed. The doc follows the now 11-year friendship between the white stork, who migrates from Africa every spring and spends six months on the lake with fisherman Adem Yilmaz.

The documentary made Yaren a household name in Turkey, with many following her annual migrations and reunions with her human friend.

The singular friendship first came to public attention when the unlikely pair were snapped by nature photographer and birdwatcher Alper Tuydes, whose images garnered international attention.

That proved the genesis for the film, selected as the winner for Best Documentary at the Prague Film Awards in 2020.

Tuydes informed followers of Yaren’s latest arrival on Instagram: “Finally, Yaren has reunited with Uncle Adem for the 11th year. She reached the village on 6th March at the end of her migration journey, which she had set out on days ago. Beyzanur Cakil, one of Yaren’s foster parents, gave us the good news, but we had to wait for her to get on the boat.

“On Monday morning [March 7], in the first light of dawn, she came to Uncle Adem’s boat again. Now they will be fishing together all summer. Happy 11th anniversary of their reunion, bless them.”

A day after the stork returned, she visited Yilmaz, who was on his boat awaiting his old friend.

“I have been very excited since yesterday,” Yilmaz told newspaper Gün Haber. “I felt joy and happiness when Yaren came to my boat this morning. Yaren and I will be fishing and chumming around for six months. I am thrilled, I got my Yaren back this year, too.”

Yilmaz admits he was worried that she would not return this year. But said he hopes their friendship will continue as long as Yaren is alive.  “I love Yaren very much, she is a part of me.”

During spring, tens of thousands of storks migrate from Africa to European countries via Turke. Eskikaraagac is the only Turkish settlement that is a member of the European Stork Village Union.