This is the second time a lamb with an extra leg has been born on this farm since 1997.
By Darko Manevski March 12, 2022
Facebook
Twitter
Linkedin
Email 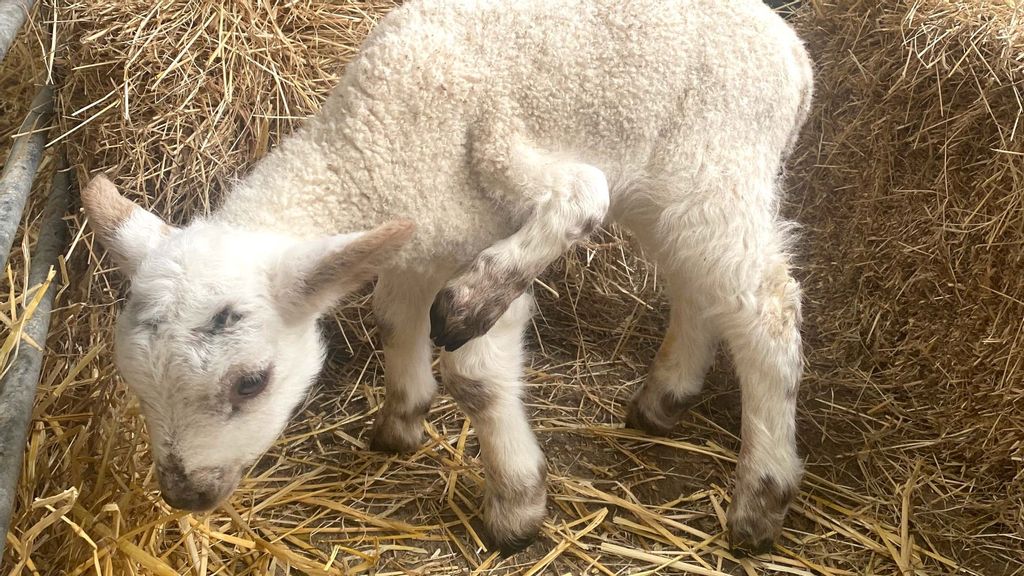 The five-legged lamb is the second of its kind to be born at Whitehouse Farm in Northumberland, U.K., since 1997. (Whitehouse Farm/Zenger)

A five-legged lamb abandoned by its mother shortly after birth at a farm in Northumberland in the United Kingdom is doing well under the care of the farm manager.

The as-yet-unnamed lamb was one of three born to the same ewe. Although some mother sheep can raise three lambs, on this occasion, the five-legged lamb was rejected.

Farm manager Heather Hogarty said the outcast lamb was probably pushed aside because it was smaller than its siblings rather than because it was different. As a result, the staff have taken to feeding her by hand.

The little lamb is being kept with other bottle-fed lambs and does not seem to be disturbed by its extra leg, which appears to be nonfunctional and does not reach all the way to the ground.

“We are getting her checked up regularly by the vet, but at the moment, it doesn’t seem to disturb. But if it gets in the way in the future, there might need to be an operation to remove it,” Hogarty told Zenger.

Hogarty noted that the tiny lamb was born on a special date: Feb. 22, or 2.22.22. This was a Tuesday, which is the second day of the week. She also has two siblings.

“I’m not sure what the significance of that is, but it’s certainly interesting and a big coincidence,” Hogarty said.

Suggestions for a name for the lamb are being solicited via social media, and Hogarty hopes to choose one that is special.

The little lamb was fortunate in being born at Whitehouse Farm, near Morpeth in Northumberland, a sparsely populated rural county in northeast England, bordering Scotland. The farm showcases a wide variety of animals. Apart from the regular farm inhabitants, including alpacas, monkeys and reptiles, there is also a café on the 40-acre site.

The farm has regularly hosted school visits as well as the public since it started operating in 1997.

Hogarty, a full-time manager of the family-run venture, said the owners were pleased that the lamb was doing well, noting that staff are continuing to bottle-feed her.

The condition of being born with more limbs than usual is known as polymelia. When the extra limb is rooted to the midline of the back, as appears to be the case in this little lamb, that is known as notomelia.

Though very uncommon, rates of occurrence are unclear. Due to increasing reports of the condition among cattle in recent years, studies are being undertaken to better understand its causes.

Hogarty says this is actually the second time she has witnessed such a birth in the 25 years that she has been at the farm.

She said the last one had been named Quinto and was also born with five legs. The extra leg was later removed, leaving the female lamb to live a long and happy life, producing happy and healthy lambs — with four legs.

«Previous Post
VIDEO: Famous Stork Yaren Visits Turkish Fisherman For The 11th Straight Year»Next Post
Made In China: Researchers Recreate Trousers That Were Like The Versace Of The Ancient World