Optimism Grows For Survival Of Hawaiian Corals In Long-Term Study

Long-term study shows that even after a stark response to stressors, given enough time, corals can recalibrate.
By Martin M Barillas March 12, 2022
Facebook
Twitter
Linkedin
Email 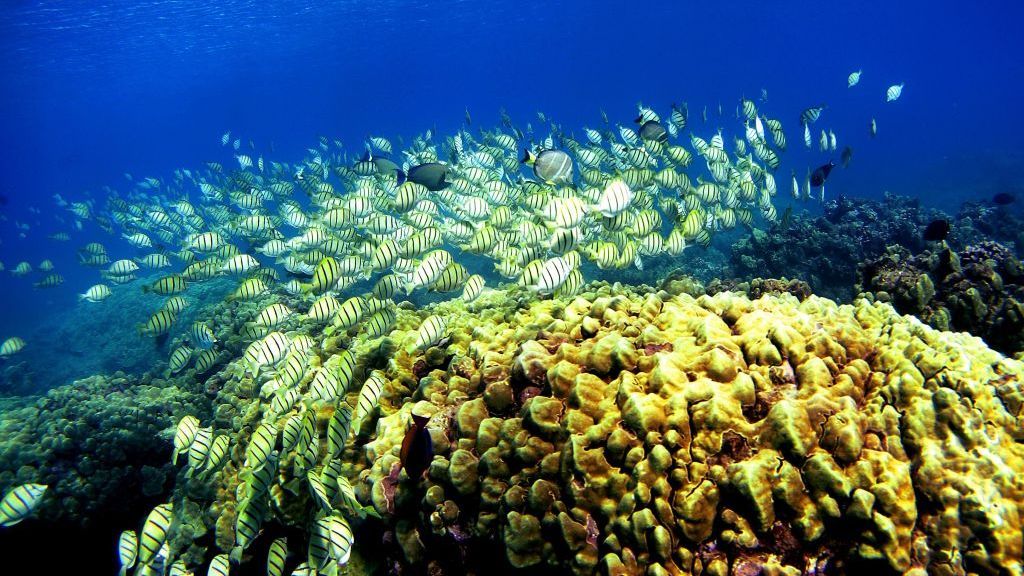 A school of manini fish pass over a coral reef at Hanauma Bay on Jan. 15, 2005, in Honolulu, Hawaii. Many coral reefs are threatened by ocean warming and acidification, but a new study offers hope about their long-term survival. (Donald Miralle/Getty Images)

Corals, which are foundational to the ecosystems of shallow-water reefs in many of the world’s oceans, have been found to be much more resilient to changes in climate than previously thought.

A long-term study of three Hawaiian coral species showed that they survive and sometimes thrive in warmer, more acidic oceans.

“We found surprisingly positive outcomes in our study. We don’t get a lot of that in the coral research field when it comes to the effects of warming oceans,” said Rowan McLachlan at Oregon State University, lead author of the study, which appeared in Scientific Reports.

More than three-quarters of Earth’s coral reefs in 2014–2017 were exposed to heat stress, according to the researchers, leading to bleaching, which is a breakdown of the symbiotic relationship between corals and the algae that feed them. During that period, 30 percent of the reefs died off.

Covering less than one percent of the oceans, reefs feature almost 25 percent of all known marine species. They also regulate oceanic carbon-dioxide (CO2) levels and may offer new medicines for human use.

Warmer ocean temperatures stem from a rise in atmospheric CO2 levels. Because some 25 percent of atmospheric CO2 dissolves into the ocean, rising CO2 levels also increase ocean acidity. The increasing heat and acidity threaten sensitive corals and the species that depend on them.

For this study, samples of common Hawaiian coral species were used: rice or pore coral (Montipora capitata), finger coral (Porites compressa) and lobe coral (Porites lobata). They are all key to reef-building.

In the lab, corals showed significant mortality under conditions mimicking expected increases in temperature and acidity. As many as half of the specimens died during testing. However, none of the species experienced an utter die-off, and some specimens were thriving by the end of the study. McLachlan said she was hopeful about the fate of corals.

Study co-author Andréa Grottoli of The Ohio State University said the results were positive but also more realistic than those of earlier studies because the study was conducted over 22 months, while related research may last only days.

“There are aspects of coral biology that take a long time to adjust. There can be a dip when they are faced with stressors, but after enough time, corals can recalibrate and return to a normal state,” Grottoli said. “A study that lasts five months is only seeing part of the arc of the response.”

The researchers put the coral samples in tanks under four different conditions: a control tank with current ocean conditions; an ocean acidification condition (-0.2 pH units); an ocean warming condition (plus 2 degrees Celsius, or 3.6 F); and a condition that combined warming and acidification.

They found that 61 percent of the corals survived warming temperatures, while there was a 92 percent survival rate for the control group. However, the corals in the experiment were not exposed to other stressors such as pollution and overfishing.

McLachlan noted that the study is “arguably more realistic and accurate in predicting the outcome of corals in the future under global climate change.”

Finger and lobe corals proved better at resisting combined acidification and warming than rice coral. Survival rates for this condition were 71 percent, 56 percent and 46 percent for finger, lobe and rice corals, respectively.

McLachlan observed that the finger and lobe corals were “coping well, even thriving,” under the imposed conditions and were able to adapt to higher temperatures and acidity, maintaining metabolism and normal growth.

Grottoli cautioned that rice corals may do better in their natural environment than in the lab because they rely on tiny zooplankton — the ocean’s tiniest drifting animals — that were not as readily available under research conditions. “We may have underestimated their capacity for resilience in this study. It may be higher on the reefs,” Grottoli said.

The researchers aimed to closely match lab conditions to real life. The corals were kept in outdoor tanks featuring natural light and seawater, along with starfish, urchins, fish, crabs, rocks and sand. In addition, the lab induced the natural ebb and flow of pH levels and temperature over each day and season.

“It is important to mimic the real-world conditions, and our study does that,” Grottoli said. “This makes our findings very robust.”

“We don’t know how corals will fare if changes in temperature and acidity are more drastic than what we used in this study,” McLachlan said. “Our results do offer some hope, but the approximately 50 percent mortality we saw in some species in this study is not a small thing.

“The results provide hope that if we can mitigate climate change and keep within the targets of the Paris Climate Agreement, coral reefs will persist in some form,” McLachlan said, “albeit with reduced abundance and genotypic diversity.”