Various countries, including the U.S. and U.K., support Ukraine, but discourage citizens from traveling there to fight.
By Joseph Golder March 12, 2022
Facebook
Twitter
Linkedin
Email 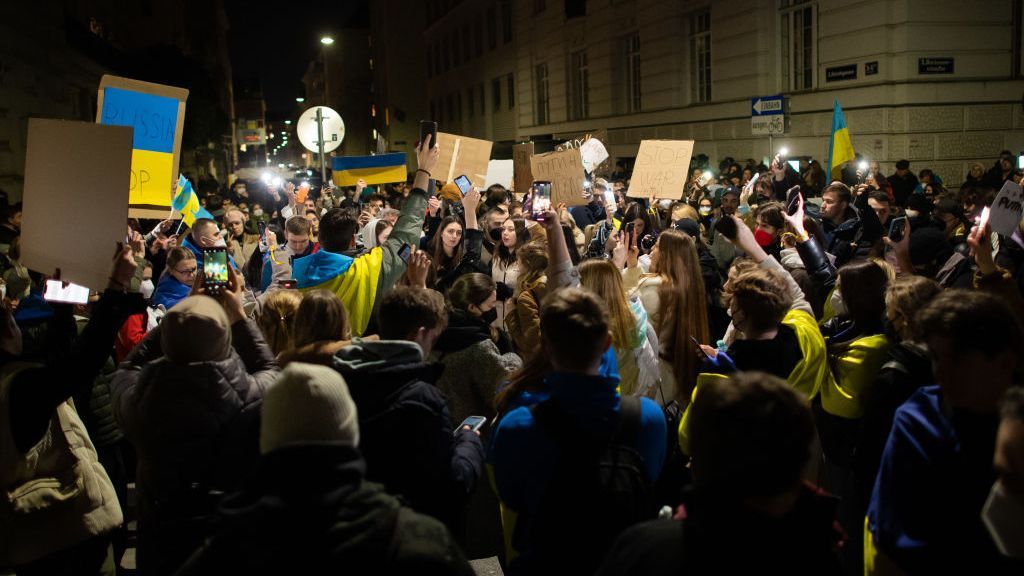 Protesters gather outside the Russian Embassy to demonstrate against the Russian military invasion of Ukraine on Feb. 24 in Vienna, Austria. (Thomas Kronsteiner/Getty Images)

Austria said that any of its citizens who fight for Ukraine against the Russian war machine will lose their passports and their Austrian citizenship, which could reportedly leave them stateless.

“There is no need for a procedure, it happens ex ledge,” Mayer said. This means, in theory, the person becomes stateless, with their passport and identity card no longer valid, making it difficult to return to Austria.

Zenger contacted the Austrian Ministry of the Interior to request confirmation.

Ministry of the Interior spokesman Harald Soeroes told Zenger (in German): “Legally, a distinction must be made whether persons who take part in hostilities abroad are Austrian citizens or not. In the case of Austrian citizens, §32 (entry into military service in a foreign country) and §33 (revocation of citizenship) of the Citizenship Act (StbG) contain provisions on the loss or revocation of citizenship.

“In the case of persons entitled to protection in Austria, participation in a military conflict would constitute grounds for denial. With regard to the reasons for exclusion and denial, the Asylum Act refers to the reasons specified in Article 1 Section F of the Geneva Refugee Convention — crimes against peace, war crimes, crimes against humanity, violation of the goals and principles of the United Nations.”

Zenger asked Soeroes whether the law is being enforced and, if not, if the Ministry of Interior plans to enforce it. He said: “If such cases occur or come to the attention of the authority, the applicable law will, of course, be implemented.”

Regarding what constitutes “persons participating in combat operations abroad,” and if this only applies to people taking up arms or applies to people baking bread for soldiers, washing their clothes, or providing psychological counseling, Soeroes referred Zenger to his previous answers. He said it was “a matter for the courts to decide, not the executive.”

It is unclear how many Austrian citizens have traveled to Ukraine to fight.

The Ukrainian Embassy in the U.S. has reportedly seen thousands of applications from Americans who want to join the fight, stating recently that about 100 citizens had seen their applications accepted.

However, U.S. State Department spokesperson Ned Price warned during a briefing Friday that any Americans fighting in Ukraine will be on their own and the U.S. will not be able to assist or evacuate them.

Aside from the threat of capture or death, Americans fighting on behalf of Ukraine will be viewed by Russia as mercenaries, and could even face criminal prosecution from Russia, Price said.

The State Department continues to urge Americans not to travel to Ukraine.

The U.K. government also states on its website: “If you travel to Ukraine to fight, or to assist others engaged in the conflict, your activities may amount to offenses against UK legislation, and you could be prosecuted on your return to the UK.”

British media have reported that approximately 100 Scots have already joined the fight, including a 61-year-old Scottish grandfather named Rab Grady, with Scottish First Minister Nicola Sturgeon saying people should “think carefully about what we can do to support Ukraine that is actually helpful and meaningful.” She discourages people from traveling to Ukraine to fight.

France’s laws state that it “punishes participation in mercenary activity with five years’ imprisonment and a fine of EUR 75,000” [$81,000]. It is unclear if this law applies to French citizens who obtain Ukrainian citizenship and join their Armed Forces.

Ukraine’s First Deputy Interior Minister Yevhen Yenin said foreigners traveling to Ukraine to fight will be given Ukrainian citizenship. Ukrainian Minister of Foreign Affairs Dmytro Kuleba has called on foreigners on Twitter to join the fight in Ukraine against the invading Russian forces.

Austria is not a member of NATO member, a military alliance of 30 independent countries, but it is a NATO partner. It is technically neutral, but has condemned “violations of international law” by Russia, despite the Russian embassy’s vocal protests on Twitter.

The Russian embassy in the Austrian capital Vienna was targeted with red paint on the afternoon of March 6, shortly after vocal exchanges between a majority of pro-Ukraine protesters and two protesters who appeared to agree with the Kremlin.