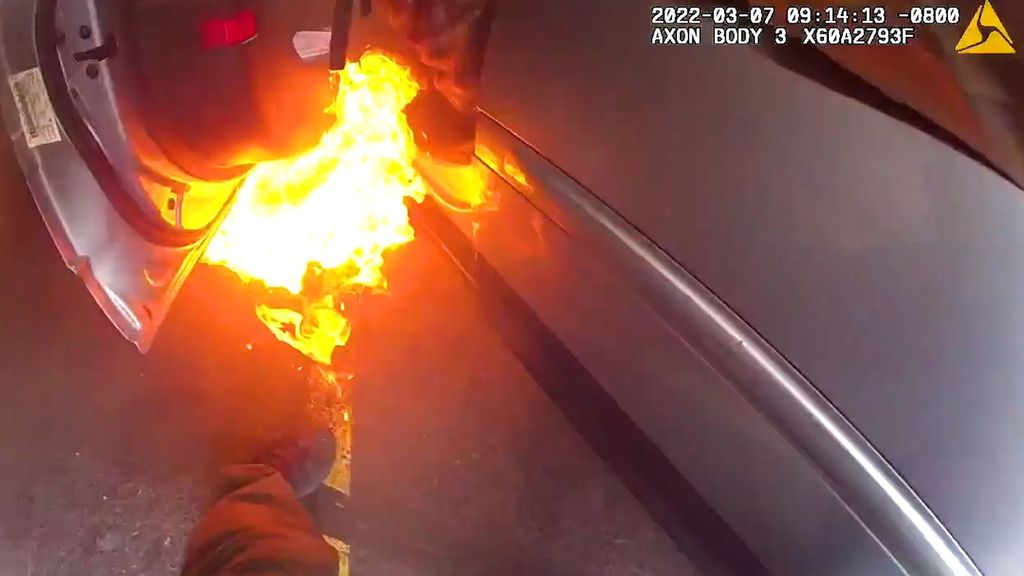 Benton County Sheriff's Corporal JP Benitez pulled a man from this burning SUV seen in a screenshot from a video in Kennewick, Wash., on March 7, 2022. (Benton County (Washington) Sheriff's Office/Zenger)

A police officer in Washington state was captured on video dragging an unconscious man from a burning vehicle he had crashed into a parked camper.

“We’d like to share the body-worn camera footage of Corporal JP Benitez’s heroic actions as he pulled an unconscious male from a burning vehicle,” Benton County Sheriff’s Office said about what they called a “hair-raising event that occurred on March 7 at about 9 a.m.”

“Corporal Benitez was driving through the area of Highway 395 and W Clearwater Ave when he saw a vehicle on fire in a nearby parking lot. [The officer] discovered there was an unconscious male inside the burning vehicle. Without hesitation, Officer Benitez ran to the vehicle and pulled the male out and began rendering first aid,” the statement posted on Facebook said.

According to local reports, the driver was found to be in OK shape at the scene but was later taken into custody on suspicion of driving under the influence of drugs or alcohol.

Public praise for Benitez’s actions was effusive on social media.

Cases of police officers rescuing people from burning cars and having the scene caught on video have become more frequent than likely imagined, not just with the ubiquity of smartphones but with the proliferation of body cameras among police in the U.S. The actions of law-enforcement personnel in cities from Atlanta to New York City to San Antonio are now regularly filmed and shared online.

Earlier this year, another police officer faced great risk to rescue a person from a burning car.

In that incident on Jan. 13, video shows a police officer in San Antonio rescuing a trapped passenger in a burning car while trying to put the fire out with an extinguisher.

After getting the woman to safety, Garcia told KENS5 news: “I was like ‘if this thing was going to blow, let it blow, but I am going to continue to get her out the car.’

“I knew one way or the other I was going to get her out.”

«Previous Post
DST Or Standard Time? 5 Things To Think About Before You Make Up Your Mind»Next Post
VIDEO: Shopper Hit By Car Asks Paramedics If His Six-Pack Of Beer Is OK