Late Friday night into Saturday morning, much of the Southeast will be impacted by severe weather.
By John Murphy March 11, 2022
Facebook
Twitter
Linkedin
Email 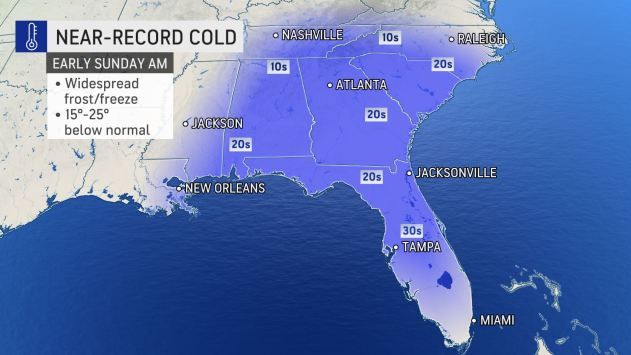 On Saturday, the cold will expand into the eastern United States, dropping temperatures 30 to 40 degrees in just 24 hours for places like Nashville and Pittsburgh. Areas as far north as New York and as far south as Florida will experience at least a 20-degree temperature drop in just 24 hours by Saturday afternoon. (AccuWeather)

A blast of cold air has traveled across much of the United States through the second half of the week, breaking records from Washington State to Oklahoma. Cold air began to tie records on Wednesday when both Olympia, Washington, and Seattle tied record daily low temperatures for the day.

The cold air continued to move to the east, breaking daily record low temperatures in Oregon and Idaho. By Thursday, the cold air had dropped temperatures to 20 degrees Fahrenheit below zero in Laramie, Wyoming, breaking the previous daily low-temperature record by 5 degrees. Denver, Colorado, broke a record low on Thursday morning by 4 degrees, recording an early morning temperature of 7 degrees below zero.

“Currently, the cold air that is expected to impact the Southeast states is diving southward across the Canadian Plains and into the U.S. Plains. Part of this cold air is helping to fuel the snow we are expected from Colorado and New Mexico through the Great Lakes currently,” said AccuWeather Senior Meteorologist Rob Miller.

The arctic weather is forecast to worsen for the northern plains on Friday, sending temperatures in Minneapolis 25 degrees below normal. The bitter cold will advance into Texas before impacting much of the eastern plains.

On Saturday, the cold will expand into the eastern United States, dropping temperatures 30 to 40 degrees in just 24 hours for places like Nashville and Pittsburgh. Areas as far north as New York and as far south as Florida will experience at least a 20-degree temperature drop in just 24 hours by Saturday afternoon.

Many locations in the Southeast will have high temperatures below the normal low temperature on Saturday, including Atlanta, Nashville and Birmingham.

This is due to an unusually strong dip in the jet stream which is allowing the late-season surge of cold air to dip so far south. The unusual jet stream setup will cause lower temperatures to dip even further on Saturday night into Sunday morning for the Southeast.

Bryson City, North Carolina, is forecast to break its record daily low temperature by more than 10 degrees on Sunday, with temperatures expected to drop to 11 degrees. The current record low for Bryson City on March 13 is 22 degrees, set in 2000.

Several other cities are also forecast to break record low temperatures come Sunday morning, including Knoxville and Mobile, Alabama. Even areas in Florida will dip below freezing, including Jacksonville which is forecast to bottom out at 30 degrees.

These low temperatures in the Southeast could cause freezing and frost concerns.

“These frost and freeze concerns extend into central Florida Sunday morning and could cause some issues for the Florida citrus crops. Certainly, anyone who has plants or their own gardens will want to take precautions to protect their plants,” said Miller.

But the cold air won’t last long with temperatures expecting to be back to near-normal by Monday, according to Miller. Some cities that experienced record cold on Sunday will quickly whiplash back into higher temperatures within 24 hours.

Baton Rouge, Louisiana, will experience a temperature increase of more than 40 degrees from Sunday morning into Monday afternoon. The city is forecast to bottom out at 26 degrees before rebounding to 69 degrees on Monday.

“The cold shot is going to be a quick one, with very cold low temperatures Saturday night into Sunday a.m., then Sunday afternoon temperatures should be a good 10-15 degrees warmer, and already closer to normal by Monday,” Miller said.