Potent Winter Storm To Spark Severe Weather In The Southeast

The Southeast should get a chance to dry out on Sunday and Monday before more rain arrives by Tuesday.
By Ryan Adamson March 11, 2022
Facebook
Twitter
Linkedin
Email 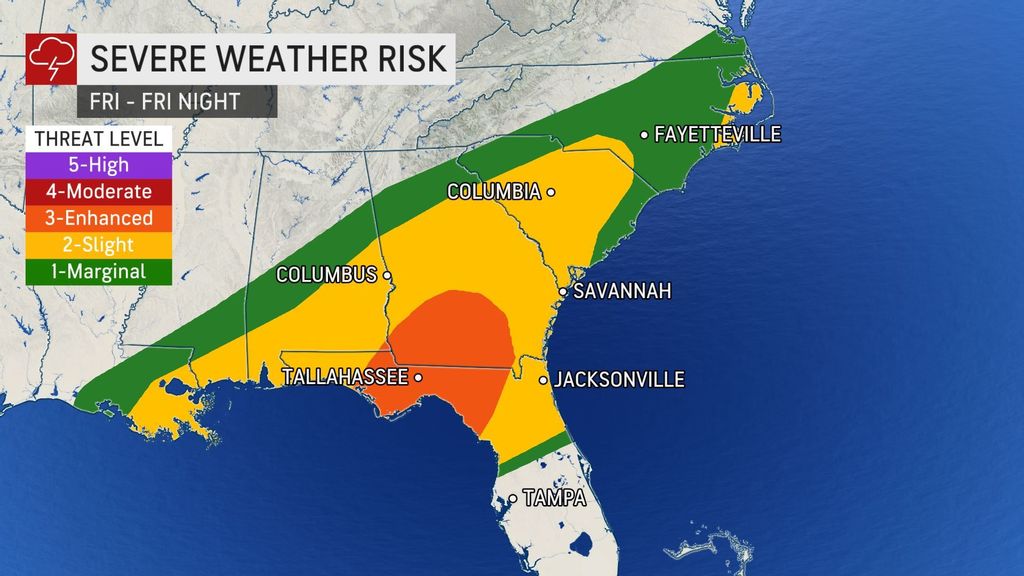 A population of more than 30 million is at risk for some type of severe weather danger Friday moving into Saturday. (AccuWeather)

AccuWeather meteorologists are warning that the warm side of a major storm system tracking into the eastern United States could cause an outbreak of severe thunderstorms in the Southeast from late Friday into Saturday.

It’s already been an active week for severe weather in the region following a few tornadoes in southern Alabama on Tuesday night and reports of damaging winds in Florida on Wednesday morning. The weather through much of Friday is likely to be quiet, but that will begin to change by late in the day.

“Heavy, gusty thunderstorms could begin to develop later on Friday in Florida in the warm and humid air near a stalled front in the northern part of the state,” said AccuWeather Meteorologist Matt Benz.

As the front begins to move northward on Friday evening and a new storm develops along the front, the aforementioned warm and moist air will also be able to advance northward. In turn, this will foster the development of stronger and more widespread thunderstorms.

A population of more than 30 million is at risk for some type of severe weather danger. The National Weather Service’s Storm Prediction Center (SPC) says an enhanced risk of severe thunderstorms is expected for parts of northern Florida and southern Georgia. The area includes cities such as Tallahassee and Panama City, Florida, and Albany and Valdosta, Georgia.

Locations as far north and east as South Carolina and eastern Georgia will be at risk for severe thunderstorms by later Friday night. This will include cities such as Athens and Augusta, Georgia, and Columbia, South Carolina.

“All modes of severe weather are on the table with these storms with damaging winds, hail, torrential rainfall and even isolated tornadoes all being a concern,” cautioned Benz.

There is some question as to just how far to the north severe weather could reach, according to AccuWeather meteorologists. With such a strong storm and cold front combined with the energy in the upper atmosphere, even the Northeast will have a chance of severe weather.

“Due to strong winds in the upper atmosphere, any heavier rain or thunderstorms that occur across the Northeast, especially across southern New England, can also create damaging winds at the surface on Saturday,” said Benz.

This can occur when the heavier rain carries strong winds from higher up in the atmosphere down to the surface. Just like what happened in parts of the Northeast on Monday, there may be heavy rain and damaging winds even in the absence of any lightning and thunder. Regardless, much of the East will have to endure strong winds as the storm system rapidly intensifies into a bomb cyclone.

Even where severe weather does not occur, heavy rain will bring a flooding concern to portions of the Southeast. Although parts of the region have generally been in a drought, heavy rain has fallen this week, and more rain could lead to additional flooding. In the longer term, however, this will help to alleviate the recent drought. This will also aid in putting out wildfires that have been burning, particularly in the Florida Panhandle.

The Southeast should get a chance to dry out on Sunday and Monday before more rain arrives by Tuesday. Despite a few dry days, a separate concern will be subfreezing temperatures across the South on Sunday morning. Some plants have begun to bloom in the region, and a frost or freeze is likely on Sunday morning. Temperatures in the 30s Fahrenheit may reach as far south as the central Florida Peninsula.

In fact, some parts of Mississippi could end up being colder than Alaska on Sunday morning, forecasters say.

«Previous Post
DST Or Standard Time? 5 Things To Think About Before You Make Up Your Mind»Next Post
VIDEO: Colorado Collects Helmets And Body Armor To Send To Ukrainian Fighters