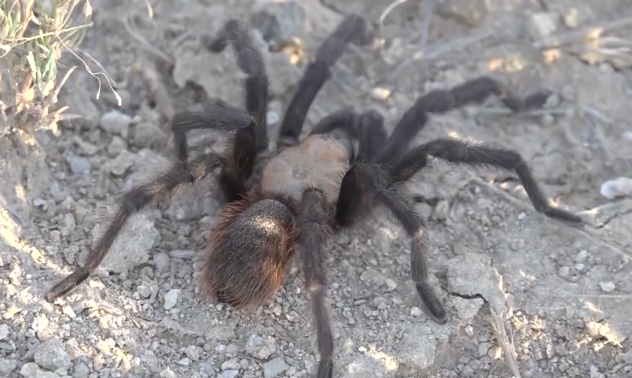 During the spiders' annual mating season, thousands of the hairy, brown creatures can be found scurrying across the rocky surface of La Junta, Colorado. (AccuWeather)

AccuWeather National Reporter Tony Laubach had chased hundreds of tornadoes over dozens of years in numerous locations throughout the United States. But there was one adventure the veteran storm chaser had never chased until he visited La Junta, Colorado, one year in late September – hoards of tarantulas.

Laubach visited the small Colorado city one autumn for a unique vermin event that had drawn large crowds in recent years. During the spiders’ annual mating season, thousands of the hairy, brown creatures can be found scurrying across the rocky surface of La Junta, located about three hours south of Denver.

What are those tarantulas on the hunt for? Not storms, but rather mates. And Laubach said there’s one specific reason they come out during that time of the year.

“It’s a lot to do with the weather,” Laubach told AccuWeather Broadcast Meteorologist Adam Del Rosso during a segment on AccuWeather Prime. “The male spiders, the ones that you’re seeing, are actually looking to mate. So this isn’t as much of a migration as it is a mate-gration.”

The annual showcase of mate-hunting tarantulas has become a tourist attraction in the city. Pamela Denahy, the tourist director of Visit La Junta, told Laubach the spiders are “docile creatures.”

But as Laubach has learned from his decades of storm coverage, the age-old warning with storm chasing is to avoid becoming the chased yourself, meaning it’s important to keep a safe distance from danger. It can be hard to tell in video footage and still images how big the spiders are, but Laubach said they’re about the size of an iPhone.

While the spiders are venomous, and their bites can cause a bit of pain and could even cause rashes to form on the skin, Denahy said the fear most people have of the creatures is unfounded because of their size.

“There are a lot of people who are afraid of spiders, so their first reaction is to be scared of them. But they’re almost like gentle giants,” she told The Denver Post. “They’re not fast-moving creatures, but it’s quite a sight because they are not just tiny spiders.”

While their venom can be fatal to small animals such as mice, it has not yet been shown to be fatal to humans.

If you yourself are an arachnid fanatic but haven’t caught the annual spectacle yet, Laubach said not to worry — they will certainly be back next year.

“The spiders really aren’t going anywhere; they’re just out in search of their love,” Laubach said. “The cooler weather in September and into October tends to help with that.”