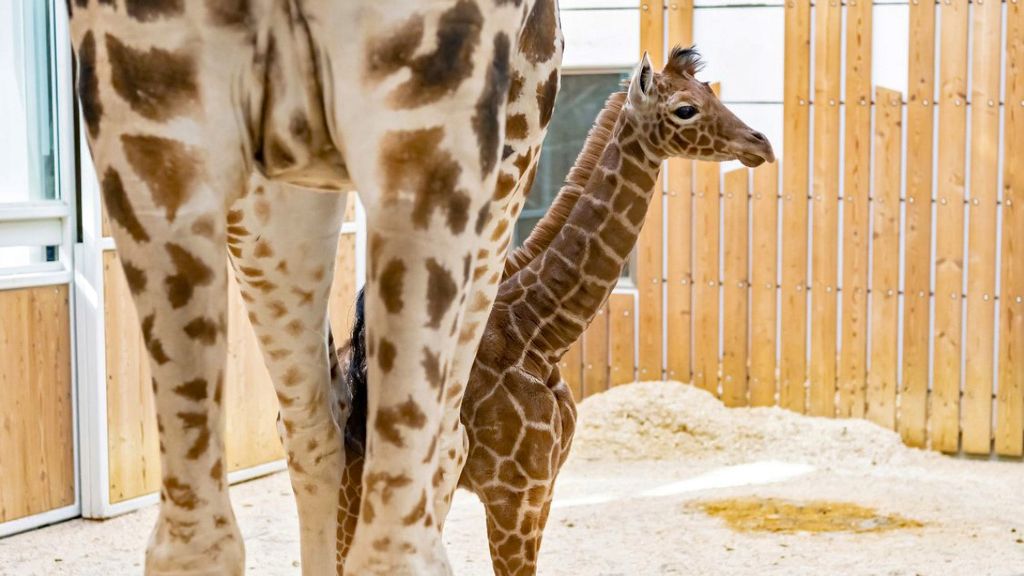 The giraffe calf was named Amari, means strong in the African language Yoruba, given her resilience in the face of her mother's initial rejection. (Tiergarten Schönbrunn/Zenger)

The giraffe calf who was rejected by her mother and had to be fed cow’s milk by Austrian zookeepers has been named Strong, a reference to her tough start in life.

The baby giraffe was born to mother Fleur and father Obi at Schönbrunn Zoo in the Vienna on Jan. 23.

The female calf has officially been named Amari, which means strong in the African language Yoruba.

After her birth, the animal’s health was in jeopardy because her mother refused to feed or care for her. That left zookeepers no option but to feed her cow’s milk instead.

The head of the zoological department, Eveline Dungl, said: “For Fleur, it is the first offspring. Unfortunately, inexperienced mothers often find themselves overwhelmed with rearing in the wild. Especially with first-time mothers, there is never a guarantee that everything will go well from the start.”

Despite the ongoing challenges faced by the nursing team that feeds the newborn giraffe with pasteurized Holstein Friesian cow’s milk, the mother appears much more relaxed now, according to Dungl.

The zoo reported the milk, which it obtained from an Austrian farmer from Laab im Walde, has a similar composition to that of a giraffe’s.

In addition, zoo veterinarians perform body temperature and weight checks regularly, as the condition of the calf needs to be closely monitored.

Dungl said: “Our giraffe girl has shown real strength of will and perseverance over the last few weeks. The animal is developing well, exploring her surroundings with interest, and dashes around the giraffe park.

“The group of giraffes is getting better at dealing with the situation, and interactions between the calf and mother Fleur are also increasing.”

Zoo director Stephan Hering-Hagenbeck said: “We have therefore opened the giraffe park temporarily since last week, so the herd can slowly get used to visitors again. With a bit of luck, you can even catch a glimpse of Amari. However, she is still mostly in the back area of the facility.”

There are eight subspecies of giraffes found in Africa. Adult giraffes weigh more than 2,204 pounds and have a lifespan of about 20 to 30 years. Their tapering heads have two to five short horns.

Giraffes eat leaves of many kinds of trees, but their favorite is the acacia. They also eat seed pods, flowers and fruits using their lips and tongue. The giraffe’s tongue can be stretched almost 17 inches to gather food.