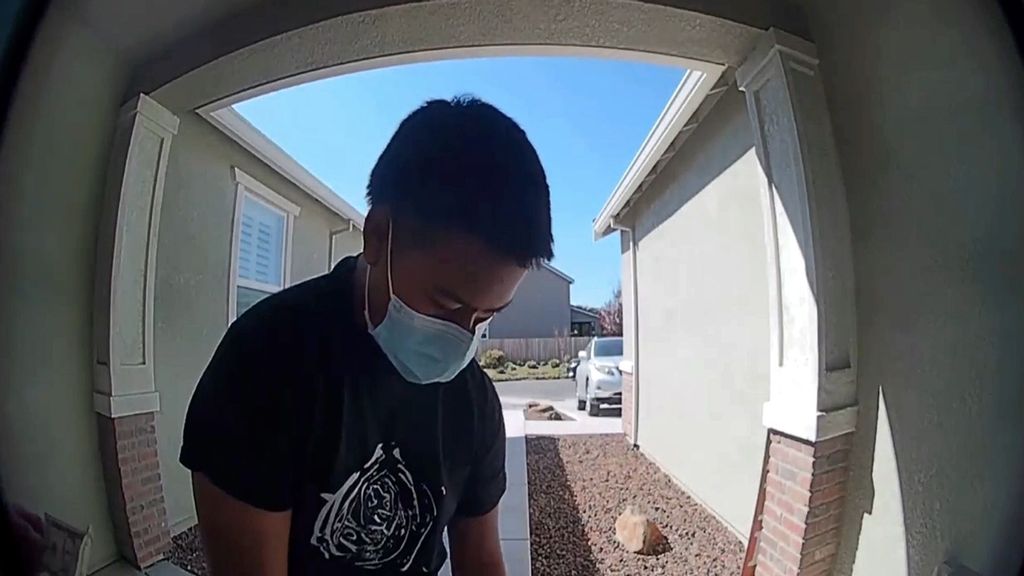 The suspect pictured in this screenshot from a video posed as a candy vendor in an attempt to join others in robbing the home in Stockton, Calif., police said. (Stockton Police Department/Zenger)

A suspected burglar posing as a seller of Skittles and M&Ms got out of the way at the last second as his three alleged accomplices rushed past him and invaded a home in California’s Central Valley.

The suspects “stole personal belongings and then ran out of the house,” the Stockton Police Department said on Facebook. The home is located on Joplin Lane in Stockton, which has a population of about 310,000.

“Officers met with the victim who advised she answered a knock at the door to one of the suspects, who was posing as a candy vendor. A short time later, armed suspects rushed past the victim and went inside the house,” the police said.

In a video of the incident captured by a security camera, it first appears that the candy seller is just an innocent bystander walking away from the home, but he quickly turns and heads back toward the premises while reaching for what appears to be a balaclava or a ski mask from his pocket. He puts it on but then soon takes it off and is shown walking away from the scene.

The footage begins with the man wearing a COVID-19 protection face mask and standing in front of what looks to be a door to the home. He can be seen holding a box of what appears to be sweets, including Skittles and M&Ms, and interacting with a person from the home.

The candy-seller suspect then bends to one side, apparently to handle some cash. Three men are then seen running toward the home and rushing past him, with at least two of them apparently carrying firearms.

Noises can be heard coming from inside the home.

The police investigation is ongoing. No names have been released, and it was unclear at the time of writing if anyone inside the home was harmed during the incident.

«Previous Post
VIDEO: Florida Man Filmed By Cop Chopper Crashing Into Cars And Fence After Being Rammed In Chase»Next Post
VIDEO: Shopper Hit By Car Asks Paramedics If His Six-Pack Of Beer Is OK