The Northeast Turned Into The ‘Land Of Confusing Weather’ This Week

Folks in the Northeast will have a short reprieve from the snowy weather through Friday.
By Brian Lada March 10, 2022
Facebook
Twitter
Linkedin
Email 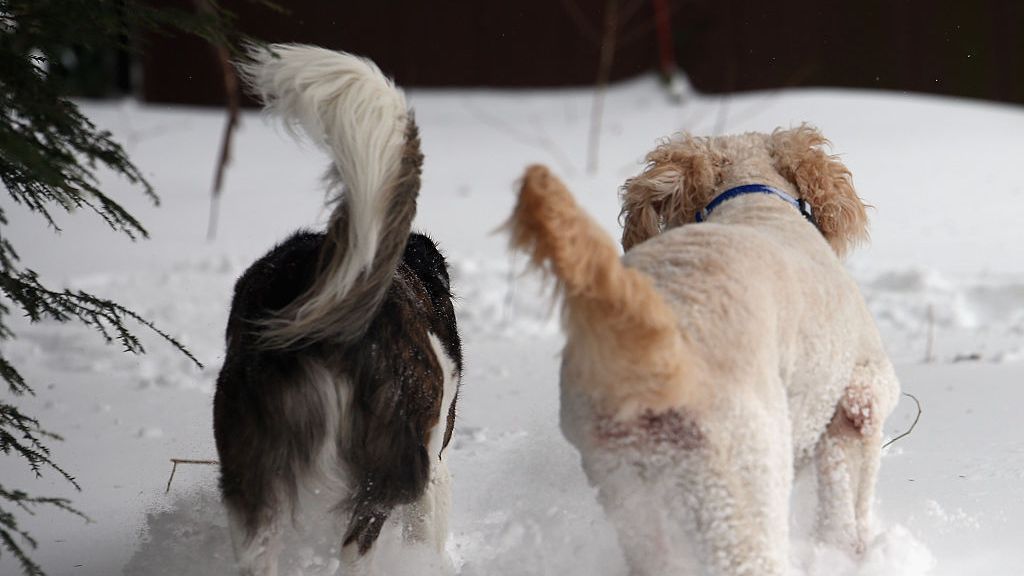 After a brief burst of spring warmth on Sunday and Monday, a quick-hitting storm dropped snow across the Northeastern U.S. In this file photo, dogs frolic in the snow in Old Bethpage. New York. (Bruce Bennett/Getty Images)

Windows were wide open, the heat was turned off and people headed outside as the warmest weather since October gave residents across the Northeast a true taste of spring earlier this week.

Sunday and Monday were the warmest days so far in 2022 for much of the Northeast with widespread temperatures in the 60s and 70s Fahrenheit challenging daily records in dozens of towns and cities across the region.

Not far away in Washington, D.C., the temperature topped out at 80 F, making Monday the first 80-degree day of the year. Typically, the nation’s capital doesn’t reach this temperature benchmark until April 6.

But just after spring fever set in for countless people across the Northeast, so too did the harsh reality that winter is not over just yet.

A quick-hitting winter storm spread accumulating snow across most of the region on Wednesday with 2 to 4 inches piling up from Pittsburgh to Boston with locally higher amounts in the higher elevations of Pennsylvania and New York.

Residents took to social media to air their grievances with the dramatic change in the weather.

Yooo, it was 73 degrees a few days ago and now its snowing WTF pic.twitter.com/q2kGAXK4Qi

One Twitter user proposed the question “Who is controlling the weather machine in NYC?!” Less than 48 hours before the tweet was sent, the weather observation site in New York City’s Central Park recorded a daily record high of 74 F.

A running coach in the New York City area took to Twitter and called this week’s weather “wild” and said that despite the snow, it didn’t stop her from running. “I was a frozen and wet runner attempting to just not wipe out on my long run.”

One person described the region as “the land of confusing weather” while others referred to this week’s weather as “weather roulette” and “fake spring,” wishing the snow would just stop.

However, not everyone objected to the appearance of snow.

Iman, a woman visiting New York City this week, told AccuWeather that she was excited to see snow in the city for the very first time.

“Anytime it snows, I feel like a kid again, but seeing it in NYC for the first time, it’s a different feeling,” Iman said. “When I saw that it was snowing, my friend and I ran up to her rooftop to look at the snow.”

Iman, who requested only her first name be used, also said that it was “shocking” and “worrying” to see such a major change in the weather in such a short period of time.

Ski resorts across the region were also elated to see some fresh powder so late in the season.

❄️ Snow is falling today and more is on the way this weekend.
🎿 27 slopes and trails

Seven Springs Mountain Resort in Champion, Pennsylvania, located southeast of Pittsburgh, posted a video of the snow falling on the mountain, along with a person having some fun making snow angels, building a snow person and even trying to start a snowball fight with one of the employees.

Folks across the Northeast will have a short reprieve from the snowy weather through Friday with temperatures predicted to rebound. This will help to melt the fresh snow, although it will not be nearly as warm as it was to start off the week.

However, it is still too soon to put away the snow shovel.

A new, more powerful snowstorm will arrive in the Northeast Friday night and spread snow across most of the region on Saturday. Little to no accumulation is in the forecast for the major cities along the I-95 corridor, but plowable snow is in the offing across the region’s interior.

“Spring, especially March, is always a wild ride in the Northeast. You get some big warmups then temperatures crash and then it’s snowing again,” said AccuWeather Meteorologist and Senior Weather Editor Jesse Ferrell.