This is the second March in a row where heavy rains have brought flooding to coastal portions of Queensland and New South Wales.
By Courtney Travis March 10, 2022
Facebook
Twitter
Linkedin
Email 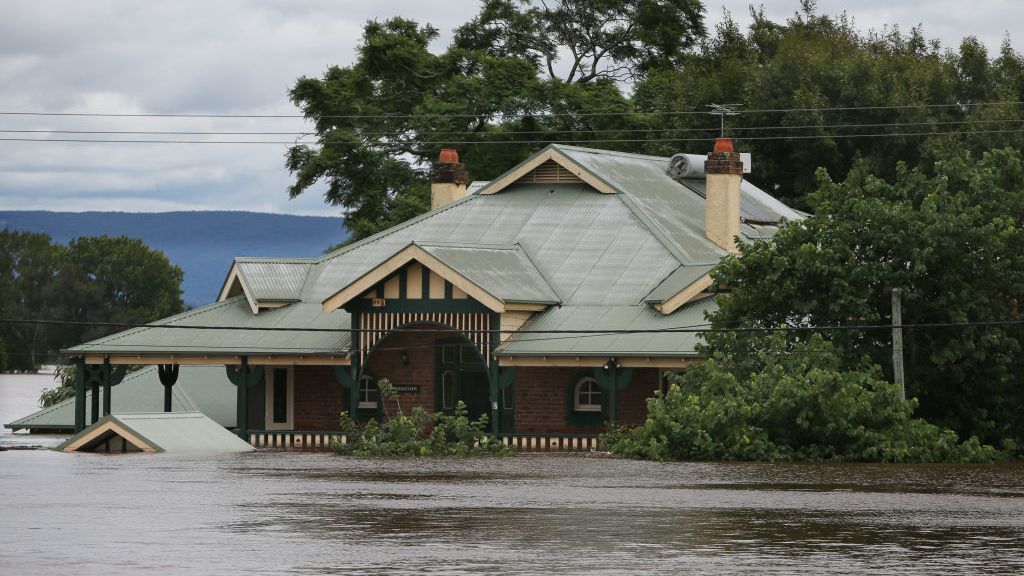 A home is seen inundated by floodwaters along the Hawkesbury River in Windsor on March 09, 2022 in Sydney, Australia. Prime Minister Scott Morrison has declared a national emergency in response to flooding across New South Wales which allows the government to access more resources, including help from defense forces, for affected communities. (Lisa Maree Williams/Getty Images)

A historic deluge in Australia over the past two weeks has led to disastrous and deadly flooding that has overwhelmed communities in the eastern portions of the country, left behind widespread damage and caused thousands to flee their neighborhoods.

In response to the ongoing disaster, government officials in Australia declared a national emergency on Wednesday following the continuation of heavy rain and dangerous flooding, according to Reuters. As of Wednesday, at least 21 people have been killed in the flooding across the states of Queensland and New South Wales.

“Australia is becoming a harder country to live in because of these natural disasters,” Prime Minister Scott Morrison said in a press conference on Wednesday.

The prime minister said he signed off on tens of millions of dollars in additional federal support for affected people.

These emergency declarations were first set up back in 2019 to help provide aid to affected communities following devastating bushfires that swept across much of the country.

Potential for flooding to occur in the NWestrn parts of NSW, including #Mungindi to #Collarenebri as floodwater travels down river systems from QLD into NSW. We are monitoring this situation and planning for the impacts of potential flooding in these areas https://t.co/R65UsEnnoi pic.twitter.com/qqF9yo1Z4L

Heavy rainfall first targeted eastern Australia on the final weekend of February when downpours swept from Brisbane to Sydney over a couple of days. Just over a week later, waves of the unrelenting flooding rain have continued to ravage the region.

The excessive rainfall has caused more than 60,000 to evacuate their homes and forced hundreds of schools to close. For some, the waters rose so quickly that residents were stranded on the roofs of their homes, entire neighborhoods were cut off and roads became impassable as the floodwaters swallowed them whole.

The bureau said that portions of New South Wales totaled 400 mm (15.7 inches) of rain in just one week’s time, especially just to the south of Sydney.

The very saturated soil, compiled with some bouts of gusty thunderstorms, has led to both tree damage and power outages throughout eastern Australia.

Between the wind and heavy rainfall, reports of property damage have devastated cities up and down the country’s eastern coast. In Hurstville, a southern suburb of Sydney, the weight of the heavy water punctured a hole in the roof of a supermarket and sent water spewing inside the building.

“I feel deeply and empathize absolutely with how people feel when they find themselves in this situation,” Morrison said during a visit to Lismore.

The continued risk of flooding has prompted environmental activists to protest outside of the emergency operations center in Lismore. In light of the extreme weather, some residents were calling for the government to take a stronger stance on reducing carbon emissions after Morrison’s government adopted a net zero carbon emissions target date of 2050.

This is the second March in a row where heavy rains have brought flooding to coastal portions of Queensland and New South Wales and hit the western suburbs of Sydney particularly hard.

“Much like last year, the flooding this March coincides with a La Niña and Ningaloo Niño, or warm water off the coast of northwestern Australia,” said AccuWeather Senior Meteorologist and Lead International Forecaster Jason Nicholls.

Nicholls added that a break in the heaviest rain is expected in the coming week, allowing residents to work ahead on cleanup efforts. However, another coastal storm or two could bring another dose of heavy rainfall before the end of March. AccuWeather long-range forecasters anticipate near- to above-normal rainfall to continue through April and perhaps into May.