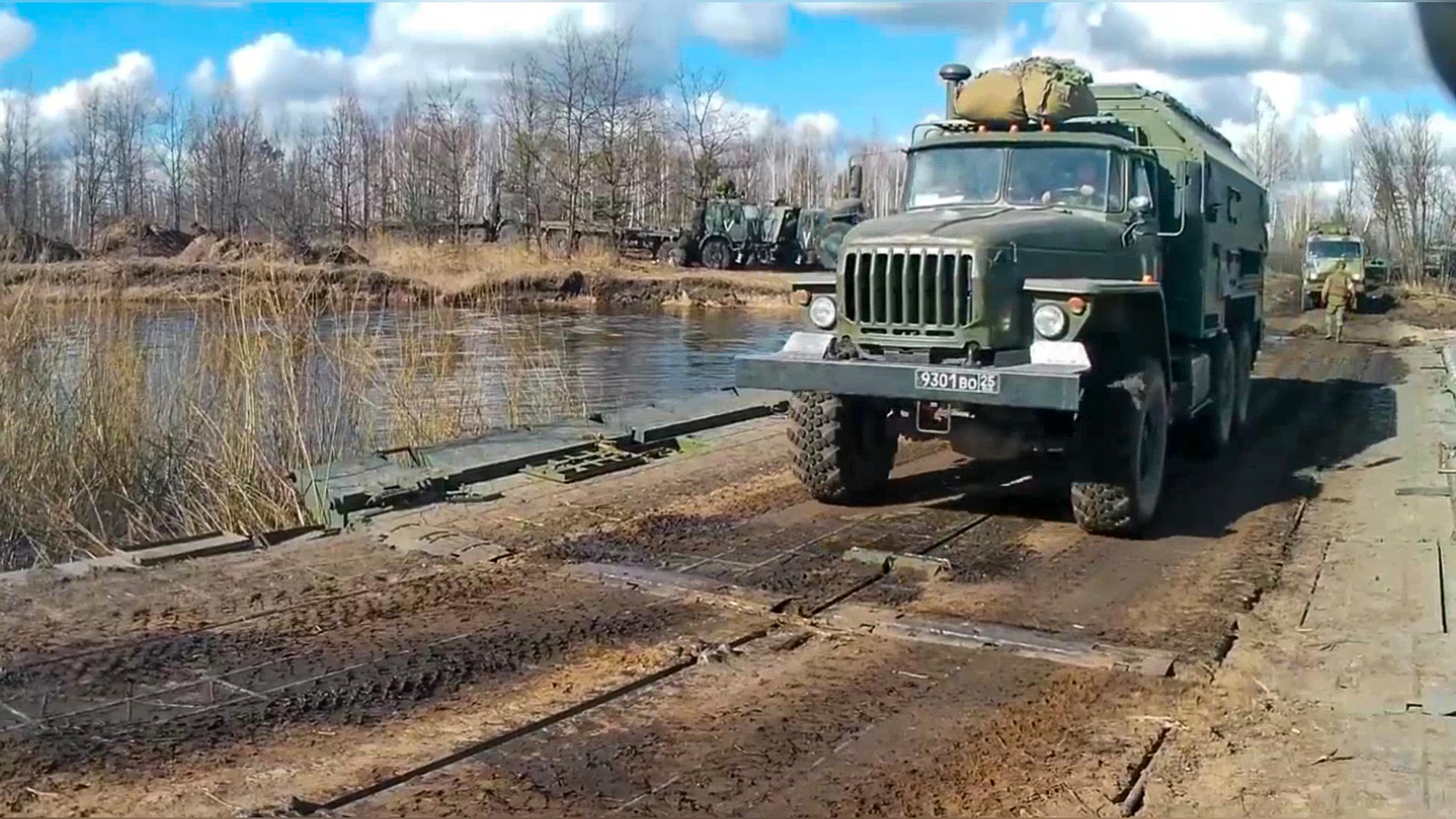 Russian military vehicles seen in a screenshot from a video making their way over a makeshift bridge during what the country's government and media call a “special military operation in Ukraine. (Ministry of Defense of Russia/Zenger)

Large military vehicles were depicted in a video released by the Russian Ministry of Defense crossing a river on what appears to be a makeshift bridge set up so that trucks and armored personnel vehicles could cross to the other side.

“Overcoming a water barrier by units of the RF Armed Forces during a special military operation in Ukraine,” the Russian Ministry of Defense said in a statement. There was no way to independently verify the location of the vehicles.

The video’s release and accompanying statements could be seen as part of Russia’s well-controlled media machine as the war in Ukraine is now in its 13th day.

The bridge crossing footage was also reported on by Zvezda, which is a Russian state-owned nationwide TV network run by the Russian Ministry of Defense, and by Lenta.ru, a Russian-language online newspaper. Based in Moscow, it is owned by Rambler Media Group. Rambler is a Russian search engine and one of the biggest Russian web portals.

The Russian government refuses to acknowledge that the ongoing bombing, fighting and destruction in Ukraine are even war. It has repeatedly referred to its invasion of its peaceful neighbor as a “special military operation” and a “special operation.” It has also reportedly silenced media organizations in the country that do not follow the Kremlin line by threatening reprisals.

Zvezda also referred to the fighting as a “special military operation in Ukraine.”

In order to punish Russia and increase the pressure on its military to stop deadly attacks in Ukraine, U.S. President Joseph R. Biden Jr. announced a ban Tuesday on Russian oil, natural gas and coal imports in the United States.

Biden also called on the U.S. Congress to provide an additional $12 billion in humanitarian, security and economic assistance for Ukraine and allies in the region.

“Russia may continue to grind out its advance at a horrible price, but this much is already clear: Ukraine will never be a victory for Putin,” Biden added. “Putin may be able to take a city, but he’ll never be able to hold the country. And if we do not respond to Putin’s assault today, the cost to the American people will be greater tomorrow.”

U.S. intelligence agencies estimate that between 2,000 and 4,000 Russian soldiers have been killed in the war so far.

Lt. Gen. Scott Berrier, the director of the Defense Intelligence Agency, told the House Intelligence Committee on Tuesday morning that analysts give the estimate low confidence, as it was based in part on information from “open sources.”

An estimated 2 million people have fled Ukraine in the less than two weeks since Russia invaded the country, officials said, while Ukrainian President Volodymyr Zelensky called for the expansion of humanitarian corridors on Tuesday.