Two of the three fires have reached 80 percent containment, while the largest remains at 10 percent.
By Marija Stojkoska March 9, 2022
Facebook
Twitter
Linkedin
Email 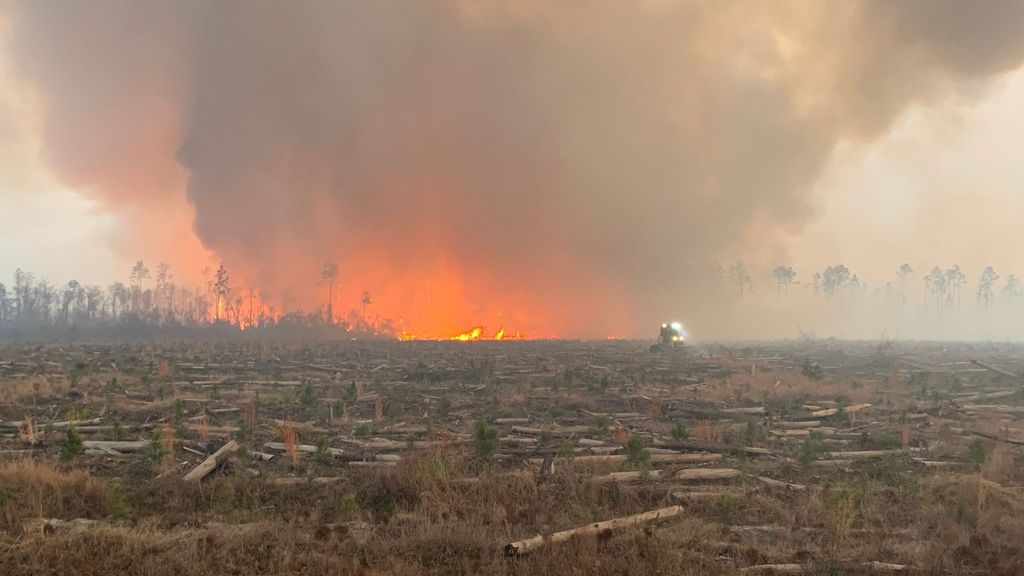 Three large wildfires are sweeping through the U.S. state of Florida, burning down trees and causing the evacuation of 1,000 homes.

The Bertha Swamp Road Fire and the Adkins Avenue Fire started on March 4, while the third one, the Star Avenue Fire, appeared on March 6 in the Florida Panhandle in northwestern Florida.

When two or more fires occur close together in the same area, they are often referred to as a “complex,” according to Florida Forest Service officials. The current wildfires are now being categorized as the “Chipola Complex.” The forest service’s blue incident management team has assumed command over firefighting efforts for this complex.

Footage captured of the fires and posted by the forest service on social media show huge flames spreading to nearby woods amid dense smoke, with the damage caused by the blaze visible in the foreground.

“This fire has shown significant activity throughout the day as winds pushed the fire through thick, dry and dead trees and vegetation left behind [by] Hurricane Michael,” Florida Forest Service said in one of its early updates on social media on March 6.

“Structure crews have been in place near the communities surrounding Bear Creek, south and east of US 231, as wildland firefighters worked to build containment lines to stem the fire’s forward progress.

On March 7, Bay County, Florida Emergency Services posted an update from the forest service, noting that firefighters and emergency personnel were working around the clock to put out the blaze. The social media post stated that helicopters had dropped over 105, 000 gallons of water on the fire so far.

“Additionally, a strike team of heavy bulldozers is focusing on building fire lines and defensible space around the communities near Bear Creek. The heavy bulldozers are better equipped to move large volumes of debris and to establish wider fire lines than typical initial attack tractor-plow units,” the post read.

At the time of this writing, the Florida Forest Service had listed its latest estimate of the affected area for the Bertha Swamp Road Fire at 28,100 acres, noting that this fire is 10 percent contained. The other two fires were said to be 80 percent contained, with evacuation orders in these areas being lifted. Residents, however, have been asked to remain cautious.