Ukraine: Nigerian Volunteer Fighters Required To Pay $1,000 For A Visa And Ticket 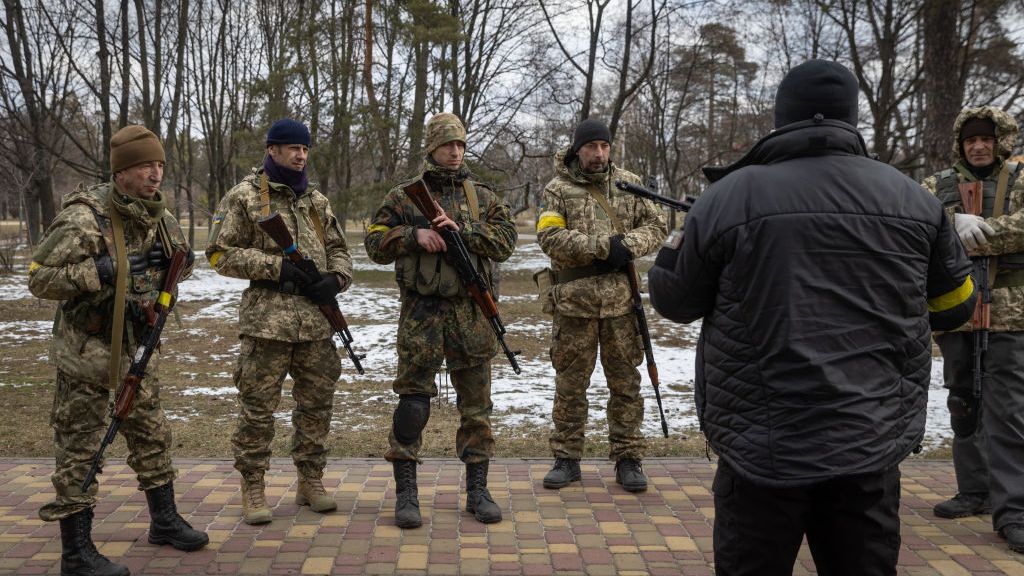 Members of the Territorial Defense Forces learn how to use weapons during a training session held in a public park on March 09, 2022 in Kyiv, Ukraine. The country called for international volunteers to come and join the fight as Russia continues its assault on Ukraine's major cities, including the capital Kyiv. (Chris McGrath/Getty Images)

When scores of Nigerian men converged on the Ukrainian Embassy in Abuja to declare their willingness to join the Ukrainian side in the war against Russia, they learned they would need $1,000.

Some 115 young men pledged to join Ukraine in its struggle against Russia, at a time when Nigerians in Ukraine are trying to return home. The men who besieged the Ukraine Embassy in Nigeria’s capital in early March put down their names in a register provided by the embassy.

But they were not pleased when Bohdan Soltys, the second secretary at the Ukrainian Embassy in Nigeria, told local media at a press conference the Nigerian volunteers would need the $1,000 to get there.

“The $1,000 requirement is excessive,” Monday Adikwu said at the press conference. He is one of the volunteers who also provided proof of military experience and an international passport.

“I was dismissed from the Nigerian Army for leaving my duty post to visit my pregnant wife without permission,” he lamented. “When I inquired what the remuneration would be like, the embassy first said $7,000 and later changed it to $3,300 per month. I then tendered my military and training certificates.”

The volunteers were responding to Ukrainian President Volodymyr Zelensky’s call for people around the world to join the fight. He said Russia’s attack was not only an “invasion of Ukraine,” but the start of a fight against democracy and basic human rights.

However, Nigeria’s Ministry of Foreign Affairs said in a statement that “as a responsible member of the international community and consistent with our obligations under international laws, Nigeria discourages the use of mercenaries anywhere in the world and will not tolerate the recruitment, in Nigeria, of Nigerians as mercenaries to fight in Ukraine or anywhere else in the world.”

While noting that Ukrainian airspace has been shut down due to the war, Soltys said that any volunteers flying to Ukraine would need to land in a country that shares a border with Ukraine to join the battle.

“All of these countries are member states of the European Union, and Nigerians will need visas to visit them. As a result, it is a major stumbling block. Ukraine is not accessible by air. You’ll have to travel to Poland or Hungary,” Soltys said.

He noted that Ukraine’s call for military help is part of international practice and that the country appreciated the volunteers’ willingness to join the fight.

“For us, it is an expression of support which we really appreciate. For now, no one has gone. We have received hundreds of applications from people who said they are willing. We have sent lists to the government, but I cannot tell you what will happen next,” Soltys said.

On the other end, Nigerians trying to flee Ukraine and return home say they have faced immense difficulties and confronted racial discrimination.

“We began protesting and telling them that they had no choice but to let us go, that this was nonsense,” Somto Orah, a Nigerian student, told Democracy Now! of his experience leaving Ukraine.

“They take in something like a hundred Ukrainians and then two Africans. That doesn’t make sense since there are more Africans than Ukrainians at the border. When we started pressing, the cops cocked their weapons, aimed them at us, and said they were going to shoot us.”

Nigerian presidential adviser Garba Shehu told Zenger that reports that Ukrainian police and security personnel were refusing to allow Nigerians to board buses and trains heading toward the Ukraine-Poland border were ”rather unfortunate.”

“A Nigerian lady with her young child was even videotaped being violently pushed to give up her seat to another person in a widely circulated video on social media,” he said.

“President Muhammadu Buhari’s Presidency, like other elements of his administration, has failed again. This time, it failed miserably because it could not evacuate Nigerians from Ukraine in record time, following Russia’s unnecessary invasion of Ukraine on President Vladimir Putin’s illegal instructions,” the writer group said in a statement.

Buhari had earlier approved his government spending $8.5 million for the evacuation of more than 5,000 Nigerians fleeing the war in Ukraine to Poland, Romania, Hungary and Slovakia.

“Two international airlines have been contracted to provide three planes that will run as many shifts as possible to help with the evacuation. 940 Nigerian Romanians, 150 in Slovakians, and 350 in Poland are among those who have registered for evacuation,” Minister of State for Foreign Affairs Zubairu Dada said during a media briefing.

“This move will also include the provision of welfare assistance for Nigerians that may decide not to come back. The Nigerian missions in those countries are also in dire situations. So it’s a whole gambit of activities that are involved.”

At about 8 a.m on March 4, the first batch of 450 Nigerians in Ukraine returned home via Romania.

The returnees, mostly students, were given $100 each by the Nigerian government.