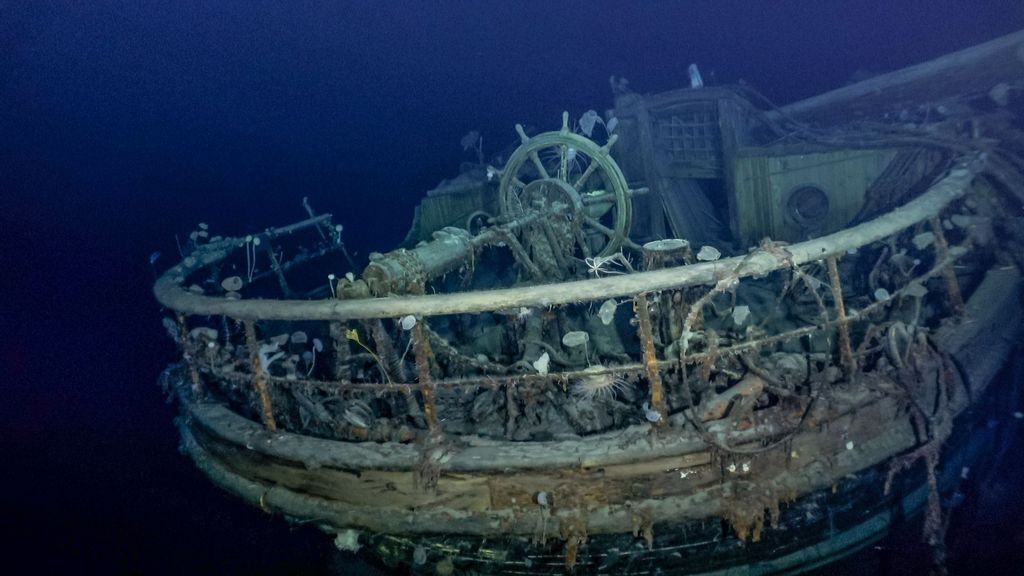 The Endurance22 Expedition uncovered the wreckage of the Endurance, the ship that carried a crew of explorers which attempted the first land crossing of Antarctica. In 1915, the ship was cornered within dense pack ice in the Weddell Sea, forcing the 28-member crew to abandon the Endurance for a months-long escape. Pictured, the taffrail and ship’s wheel, aft well deck. (Falklands Maritime Heritage Trust/National Geographic)

An expedition team’s journey into the cold depths of the Antarctic led to a discovery over a century in the making.

On March 9, the Endurance22 Expedition uncovered the wreckage of the Endurance, the ship that carried a crew of explorers which attempted the first land crossing of Antarctica in the early 20th century. In 1915, the ship commissioned by Sir Ernest Shackleton, who hailed from Ireland, was cornered within dense pack ice in the Weddell Sea, forcing the 28-member crew to abandon the Endurance for a months-long escape.

After departing from Cape Town, South Africa, in early February and spending weeks conducting a challenging search, the researchers eventually reached the resting place of the Endurance in the Weddell Sea, located at a depth of 9,869 feet, approximately 4 miles south of the initial wreckage point. The voyage was organized by the Falklands Maritime Heritage Trust, with the expedition crew working from a South African research vessel known as S.A. Agulhas II.

Photos captured by the expedition show incredible detail for a shipwreck over 100 years old.

“We are overwhelmed by our good fortune in having located and captured images of Endurance,” Mensun Bound, the director of exploration on the expedition, stated in a release. “This is by far the finest wooden shipwreck I have ever seen. It is upright, well proud of the seabed, intact, and in a brilliant state of preservation. You can even see ‘Endurance’ arced across the stern, directly below the taffrail. This is a milestone in polar history.”

The well-preserved nature of the wreckage is a result of freezing temperatures in the Weddell Sea, as British historian Dan Snow explained to NBC News. Snow stated that temperatures were “probably just below zero” at the wreckage site and that no “wood-eating microbes and microorganisms” could damage the ship amid the cold climate.

Endurance22’s team set out to find the ship with a goal to share the ship’s story with younger audiences across the globe. After the crew of the Endurance abandoned the ship in the Weddell Sea, the voyagers spent months on ice floes to reach Antarctica’s Elephant Island. With the crew waiting on the island, Shackleton and five others made an 800-mile lifeboat journey from the island to South Georgia. Finding help in the region, Shackleton was able to rescue the remainder of the crew stuck on Elephant Island, leaving no lives lost.

The expedition to find the wrecked Endurance now allows the Endurance22 team to spread Shackleton’s story.

“We have … conducted an unprecedented educational outreach (program), with live broadcasting from on board, allowing new generations from around the world to engage with Endurance22 and become inspired by the amazing stories of polar exploration, and what human beings can achieve and the obstacles they can overcome when they work together,” Expedition Leader Dr. John Shears said in a statement.

In order to reach the Endurance, the expedition team used SAAB Sabretooth underwater search vehicles, a new technology that is capable of working in deep water in order to survey the wreckage without disturbing it. The Sabretooth vehicles contain the attributes of autonomous underwater vehicles (AUVs), which point the vessels on a pre-programmed course without a physical link to the surface. The Sabretooth also has the makeup of remote operating vehicles (ROVs), which send digital images from the wreckage to the expedition on the surface via fibre optic cable.

Another benefit to the Endurance search was the scientific research related to climate change. Under the direction of Endurance22 Chief Scientist Dr. Lasse Rabenstein, a team of representatives was able to take a close look at Antarctic ice drifts, sea ice thickness and the weather conditions of the Weddell Sea. The team stated that the research will “materially help our understanding” of the Antarctic region and how it influences the changing climate.

The Endurance wreckage is being protected as a Historic Site and Monument under the Antarctic Treaty, preventing it from being “disturbed in any way” while the Endurance22 team surveys and films the ship. More footage of the Endurance, filmed by the expedition crew, is on the way via a documentary produced by National Geographic. The documentary is set to premiere on the network in fall 2022.