Attacks viewed as part of the Russian military’s strategy to encircle and cut off Kyiv. 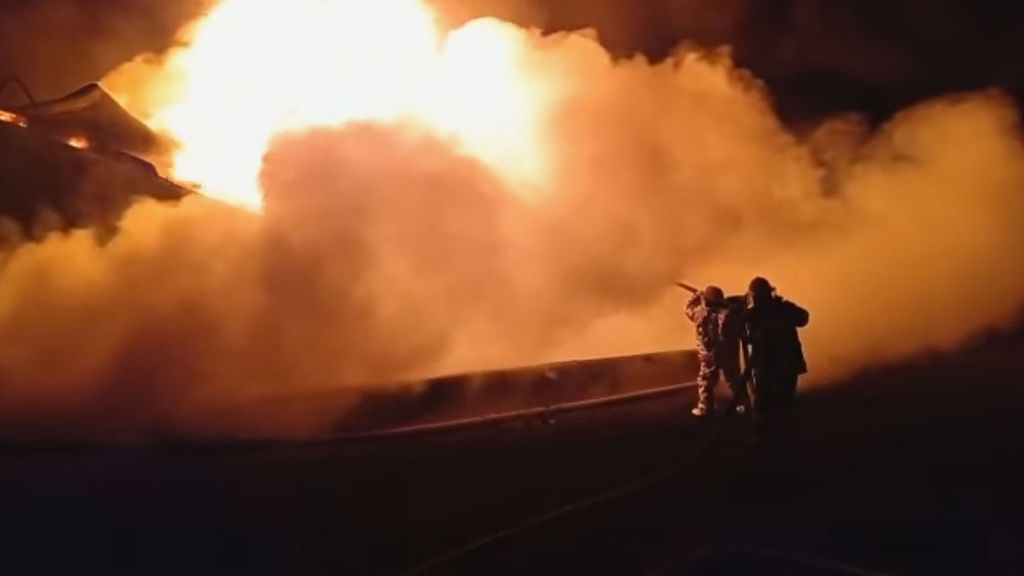 Firefighters are seen in this screenshot from a video battling blazes at oil depots following Russian strikes in the Zhytomyr region in Ukraine. (@MNSZhytomyr/Zenger)

Two oil depots west of Kyiv were set on fire after being hit by Russian airstrikes Monday night.

It was not clear how much oil they contained, but local residents were evacuated due to the pollution hazard. No deaths have been reported from the Russian shelling of the depots and subsequent blazes.

Ukrainian emergency services said about 30 firefighters in each case were bringing the fires under control on Tuesday morning local time.

Footage shared by the local branch of the State Emergency Service of Ukraine shows firefighters battling a huge blaze near the city of Zhytomyr, which has a population of nearly 270,000 and is about 88 miles west of Kyiv, the Ukrainian capital.

The second depot hit by Russian forces Monday night is in town of Cherniakhiv in the same region and with about 10,500 people.

The footage appears to confirm that the Russian forces are trying to encircle Kyiv after their assaults from the north and the east proved unsuccessful and were initially repelled.

At least four civilians were reported to have been killed Monday in the city of Irpin, which is located on the capital’s northeastern outskirts, after Russian forces reportedly shelled populated areas.

Russia’s Ministry of Defense shared footage that they say shows attack helicopters setting off to take out military targets in Ukraine during nighttime raids.

In the footage, a Ka-52 attack helicopter can be seen taking off from an undisclosed location, which appears to be a military base. It can then be seen firing its weapons at unclear ground targets. The footage then appears to show it returning to base and landing.

The ministry claimed that its helicopters seen in the footage had been successful in destroying military targets, adding to its previous claim that its military intervention in Ukraine is going according to plan.

During its invasion of Ukraine, which it is still calling a “special operation,” Russia has repeatedly claimed that it is targeting military infrastructure and military units.

The Russian Ministry of Defense shared the footage with the following detail (in Russian): “The crews of the army aviation of the Russian Aerospace Forces, acting in pairs, destroyed an anti-aircraft gun and armored vehicles with anti-tank guided missiles.

The video was posted as reports emerge that Russia is threatening to cut off its gas supplies if the oil ban touted by some Western powers goes ahead.

U.S. President Joesph R, Biden Jr. announced Tuesday that the United States will ban imports of Russian oil and other energy products, but many European allies and partners will not be joining a full boycott.

“The United States is targeting the main artery of Russia’s economy,” Biden said, adding that the move shows “the American people will deal another powerful blow to [Russian President Vladimir] Putin’s war machine.”