Weronika Fafinsk has quietly rebuilt her life in the past eight years, even as she faces new challenges.
By Josh Brady March 7, 2022
Facebook
Twitter
Linkedin
Email 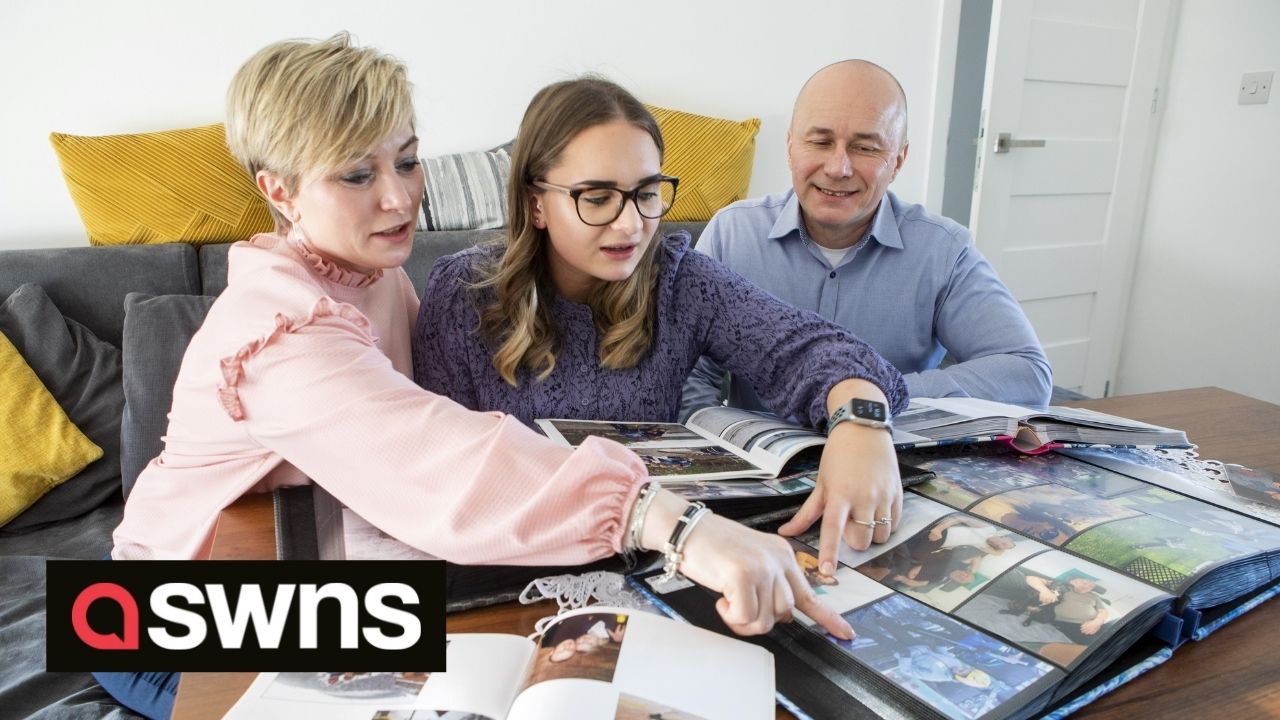 Weronika Fafinsk, 22, suffered permanent memory loss of her childhood after undergoing surgery at 14 to remove a brain tumor. She sits with her parents trying to reconstruct her life. (SWNS)

A woman had life-saving surgery to remove a brain tumor, but lost something precious in the aftermath: her childhood memories.

Despite forgetting the first 14 years of her life, Weronika Fafinsk, 22, an office manager, is grateful the surgery worked and is now embracing adulthood after beating cancer.

Fafinsk, who lives with her boyfriend, Cameron Somerville, first realized something was wrong when she was on holiday in Poland in 2012 visiting family. She couldn’t hear her music.

She said: “My Dad had bought me some headphones for the journey, but I couldn’t hear anything in my right ear. I was practically deaf.”

A doctor in Poland confirmed she had gone deaf in her right ear and was transferred to Royal Hospital for Children and Young People in Edinburgh, where she lives.

She underwent an MRI scan at the hospital and the 12-year-old was devastated to learn she had a brain tumor.

Fafinsk said: “The doctor thought it was a grade one tumor and said I may have had it since I was little. We went on holiday, and I was losing the feeling in my legs and getting headaches all the time. A scan showed the tumor had grown massively from what it was.”

The youngster underwent surgery in February 2014 to have most of the tumor removed but woke up with unexpected memory loss. She was shocked to find she could not recognize her own parents.

Fafinsk’s parents noticed a complete change in their teenager’s personality as she struggled to adjust to her post-surgery life.

“In the car going home, I was sick three times because, in my mind, I had never been in a car before. I was so scared because I didn’t know where I was going,” Fafinsk said.

She struggled with what had once been commonplace. She did not know an oven got hot. Or what a soccer ball was. But she said she was able to pick up some things quickly, such as her math timetables.

At school, she recognized no one — not even her closest friends.

Her tumor remained stable for six years, but a scan in March 2021 showed the mass had grown in size. Another scan in August 2021 showed it had enlarged. Her next scan is due next month.

To help raise awareness, Fafinsk joined a fundraising challenge run by Brain Tumour Research, a U.K. charity, where she was sponsored to walk 10,000 steps every day in February. Thousands joined her across the U.K., and beyond, to reach the finish line.

Fafinsk said: “Throughout my life, I haven’t thought about meeting people or getting a boyfriend. I thought there’s no point because I’ll die soon.

“With a brain tumor, you have three options: surgery, chemotherapy, or radiotherapy, and often they’re not even that successful. If none of these work, you’re basically given a death sentence.

“I don’t want to die, so if there’s any hope that the money I raise helps to find a treatment, then it’s worth it.”

The Brain Tumour Research charity first ran the fundraising challenge last year. It raised over $1.3 million and hopes it raised even more this year.

Matthew Price, community development manager at Brain Tumour Research, said: “We’re really grateful to Weronika for taking on this challenge for us. It’s only with the support of people like her that we’re able to progress our research into brain tumors and improve the outcome for patients forced to fight this awful disease.”