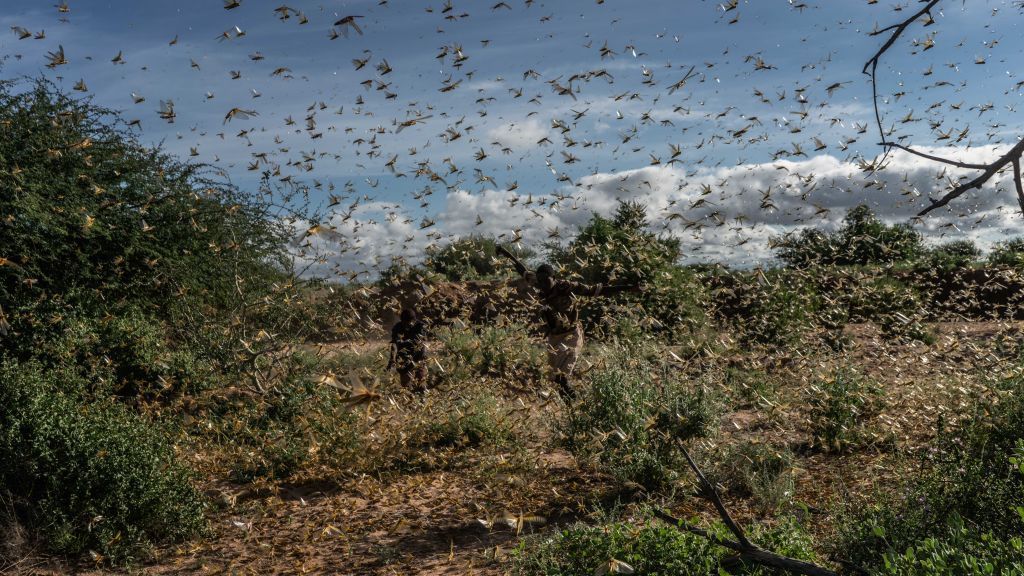 Two men chase away a swarm of desert locusts early in the morning, on May 21, 2020, in Samburu County, Kenya. Trillions of locusts swarmed across parts of Kenya, Somalia and Ethiopia, following an earlier infestation in February. (Fredrik Lerneryd/Getty Images)

“Locust swarms that decimate all crops in their path have been a major cause of famine from biblical times to the present. Over the last three years large parts of Africa, India and Pakistan have been hard-hit by locust outbreaks, and climate change is expected to exacerbate the problem even further,” said Prof. Amir Ayali, from the Tel Aviv University School of Zoology.

“Locust swarms form when individual locusts, usually solitary and harmless, aggregate and begin to migrate. However, the causes for this behavior remain largely unknown, and an effective solution is yet to be found.”

Following recent studies indicating that microbiomes can influence their hosts’ social behavior, Ayali and PhD student Omer Lavy tested their hypothesis that locusts’ microbiomes may play a role in their tendency to aggregate.

Indeed, they found that the microbiome of a solitary locust undergoes a profound change when the host joins a group.

Moreover, a specially developed mathematical model indicates that swarming provides these bacteria with potential evolutionary advantages, allowing them to spread and infect large numbers of locusts.

Although these findings do not prove unequivocally that these bacteria cause locusts to swarm and migrate, Ayali and Lavy believe that the microbiome, and specifically Weissella bacteria, are involved the locusts’ aggregation behavior.

“We hope that this new understanding will drive the development of new means for combating locust outbreaks — still a major threat to countless people, animals, and plants all over the globe,” said Ayali.

The study was based on a multidisciplinary collaboration of experts from Tel Aviv University and the University of Haifa in fields as varied as insect behavior and physiology, microbiology, and computational models of evolution. Their paper was published in Environmental Microbiology.