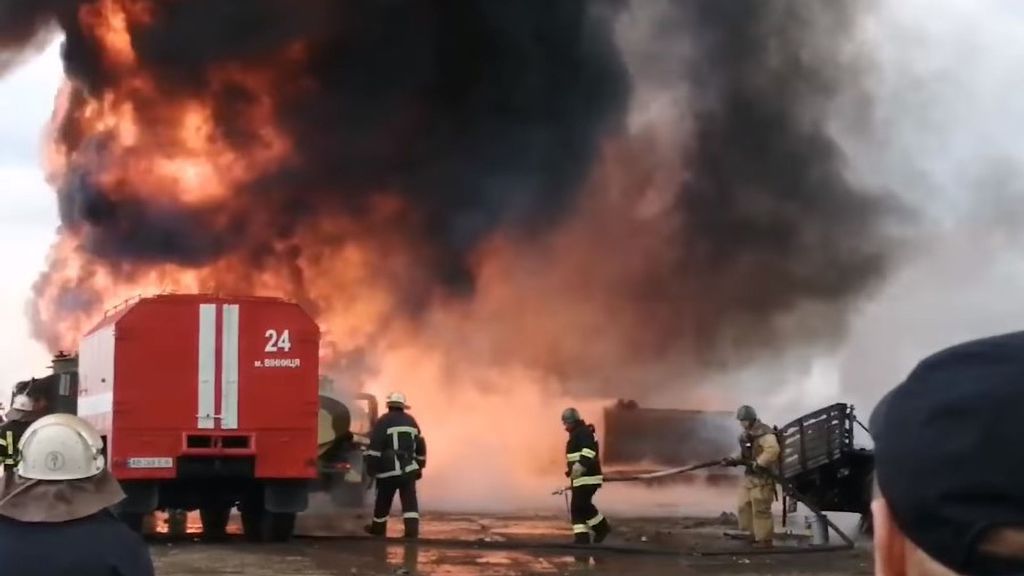 The Ukrainian emergency services rescued victims and freed bodies from a storage facility at an airport in central Ukraine that had been hit by eight Russian missiles, officials said.

“Fifteen people have been freed from the collapsed structure at Vinnytsia Airport. Nine of them were killed (five civilians, four military) and search operations are ongoing,” Ukraine’s State Emergency Service said in a statement.

“On March 6, at about 13:35 near the village of Gavryshivka, Vinnytsia region, as a result of rocket fire, a warehouse fire broke out from the FUEL on an area of about 1 thousand square meters … and partially destroyed administrative buildings,” the agency wrote in a Telegram message.

The SES said 143 men and 23 units of special equipment were being used in the emergency and rescue operation, including 30 students from the Lviv State University of Life Safety.

A Ukrainian Ministry of Defense spokesperson initially said on Facebook that missiles had been launched from the Transnitsia region in Moldova. Russia has some troops in the breakaway region in Moldova, which borders Ukraine.

The ministry later revised its original report to claim “most likely the attack was from the Black Sea area of water.”

The airport is about 120 miles southwest of the Ukrainian capital, Kyiv.

CNN reported that the mayor of Irpin, a Kyiv suburb, said at least eight individuals there were killed in the military strikes on Sunday.

“A family died,” Mayor Oleksandr Markushyn said in a statement. “In front of my eyes, two small children and two adults died.”

The Kyiv Regional Military Administration, according to CNN, has appealed to international organizations for help in resolving a growing humanitarian crisis.

“Thousands of people found themselves in isolation, because of direct hostilities, and in some places for 5-6 days they survive without electricity, water, food, medical help and means of subsistence. They are in direct danger,” it said.

Regarding the aftermath of its shelling of the Vinnytsia airport, the Russian Ministry of Defense issued a statement saying that “the Ukrainian military left their positions in a hurry, leaving the base with equipment, weapons and ammunition. … Among the trophies found are Ukrainian T-64 and T-80 tanks, armored personnel carriers, infantry fighting vehicles and Ural (general purpose) vehicles.”

Mines, anti-tank guided missiles, mortar and tank shells and more than 4,500 tons of ammunition and rocket projectiles for multiple rocket launchers were among the items the Russians claim to have seized.