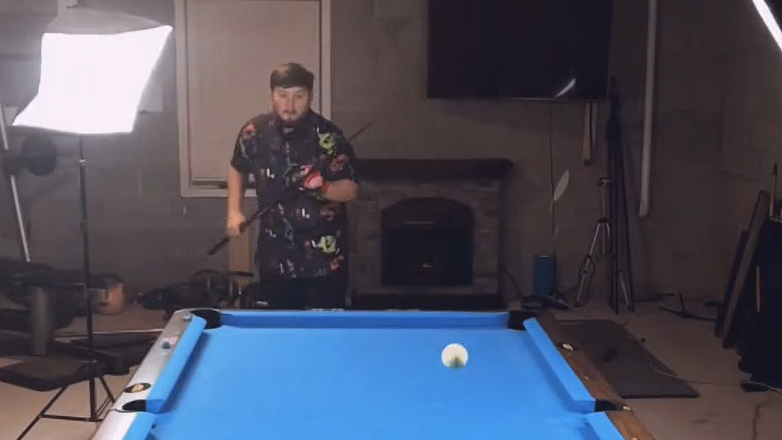 A New Jersey pool player has become an online sensation, thanks to his incredible trick-shot videos, which has garnered millions of views.

Cernatinschi, who lives in Union Beach, New Jersey, was one of the youngest players to take part in the World Artistic Pool Championships in 2012, when he was just 14 years old.

At that time, the young teen had recently moved to the U.S. from Moldova, which borders Ukraine.

“I first picked up the cue when I was around 13, completely stopped playing when I went to college, then picked it up again after one of my TikTok videos went viral,” Cernatinschi said in an interview.

Many of the influencer’s clips have gone viral on his social-media accounts, amassing  1 million or more views for his singular talents.

He said: “Some shots are quite easy to do, maybe just one or two tries. Others can take minutes or hours.” However, he does admit that some trick shots can take days to master.

“I get a lot of inspiration from other trick-shot players, but I think someone that greatly inspires me is Yoshikazu Kimura. He is one of the most creative and legendary cue artists,” Cernatinschi said.

The influencer, who creates his own trick shots while also performing established shots, is quick to assure skeptics that he does not use magnets or any other prop to carry out his tricks.

He said: “Many comment that I use a string, or that there are magnets in the ball, but honestly, it’s probably easier to make the shots than it is to fake them.”

Cernatinschi also said he plays for a few hours on the weekends and on rare occasions after work. But for him, performing trick shots is “mostly a hobby.”

“I never expected to get so many followers on TikTok. I just kept uploading trick shots that I enjoyed doing,” he said. He freely admits he is not the best pool trick-shot player out there. To prove it, he points to the many talented players posting on newer, short-form social media.

The game of pool dates from the 15th century in Northern Europe. The game was originally called billiards, derived from the French, and that term is still used by the pros.