Russia lashes out at Austria after clash outside Russian embassy in Vienna.
By Joseph Golder March 7, 2022
Facebook
Twitter
Linkedin
Email 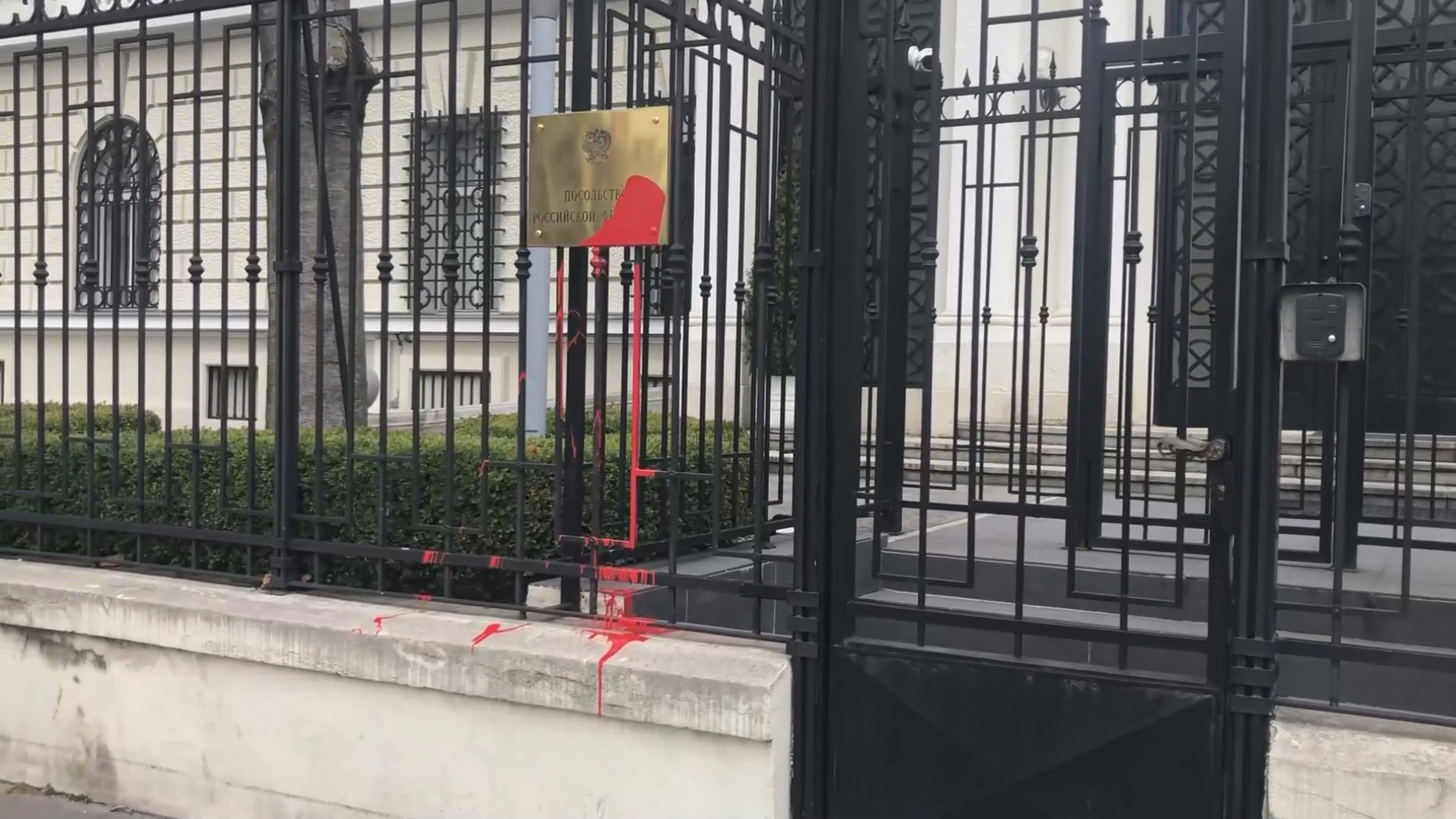 A screenshot from a video shows the red paint thrown at the Russian Embassy's plaque in Vienna. (Joe Golder/Zenger)

The Russian Embassy in the Austrian capital, Vienna, was targeted with red paint over the weekend shortly after vocal exchanges between pro-Ukraine protesters and two people who appeared to agree with the Kremlin’s point of view.

The March 6 incident was partially caught on camera by Zenger, as these exclusive images show. While conducting an interview around the corner from the embassy, a man on a bicycle whizzed by and threw paint at the plaque on the embassy.

In the footage, a loud noise can be heard before the footsteps of Austrian soldiers ring out as they chase after the paint thrower at approximately 2:10 p.m. in central Vienna. A police car is seen scrambling to join the chase.

The search for the perpetrator “was unsuccessful,” the police said in a statement. “The damage caused cannot yet be measured. The police have requested the video material, and it will subsequently be evaluated. Investigations are currently underway.”

The incident took place shortly after another one in which a woman ripped posters off the wall opposite the embassy because she disagreed with them, arguing that they were “Western propaganda.”

She was confronted by the pro-Ukraine protesters, and as the exchanges became more vocal, soldiers called the police, who defused the situation.

Subsequent images show unidentified people scrubbing the plaque and the gate in a bid to remove the paint, at 3:20 p.m., just over an hour after the incident.

The Russian Embassy expressed outrage at the paint-throwing incident and described the act as “barbaric” and “vandalism.”

Pro-Ukraine protesters at the scene called for an end to the conflict and unanimously condemned Russian President Vladimir Putin’s actions.

Austria is not a NATO member but is a NATO partner. It is technically neutral but has condemned “violations of international law” by Russian President Vladimir Putin’s regime. The Russian Foreign Ministry in Vienna tweeted March 5 that it strenuously condemned “anti-Russian rhetoric” by Austrian Chancellor Karl Nehammer and Foreign Minister Alexander Schallenberg.

Before a trip to Kyiv, Schallenberg was quoted by The Local as saying that “even if Austria is a neutral state from a military point of view, we are not neutral when it comes to violence.

“When it comes to the territorial integrity of a sovereign state, we will never remain silent, but always stand up for it resolutely.”

The Russian Foreign Ministry said on social media that Austrian leaders had breached their official policy of neutrality by condemning Russian actions in Ukraine.

The Austrian Foreign Ministry responded, also on Twitter, saying that while Austria remains militarily neutral, it would not remain a neutral party when it came to violations of international law.