VIDEO: Arsonist Sets Self On Fire While Torching Car In Portland, Oregon

The huge explosion destroyed the car. No one was inside at the time of the blaze.
By Lee Bullen March 7, 2022
Facebook
Twitter
Linkedin
Email 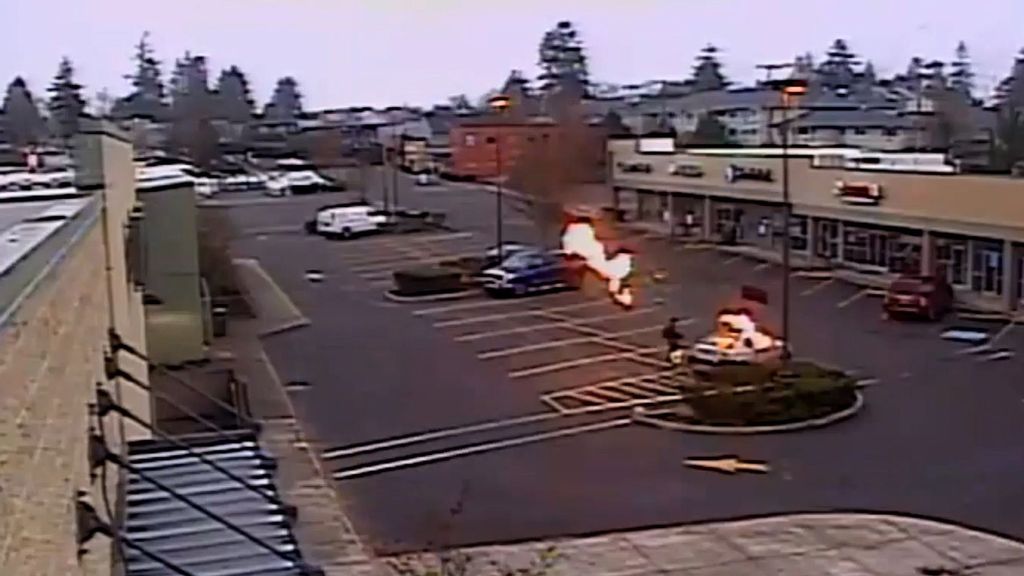 A suspect blew up a car in a store's parking lot in Portland, Oregon, on March 6. (Washington County Sheriff's Office/Zenger)

An arsonist set himself alight while torching a parked car in Portland, Oregon.

The incident was filmed in a store car park in the Raleigh Hills area in Portland in the early hours of March 6.

“Multiple people called 911 to report a car was fully engulfed in flames behind the store. Thankfully, no one was inside the car.”

“Deputies viewed surveillance video, and it showed a subject walking up to the gas tank area of the car with something in hand. A few moments later, there was a large explosion. The subject backed away, and the video showed the subject’s hand or arm on fire. The person was able to remove a burning item of clothing and walk away.”

The fire spread quickly inside the car, which was destroyed.

“The arson suspect was wearing a dark hoodie, backpack and dark pants,” the sheriff’s office said. “If anyone saw a person matching that description in the area at the time, or has information about this crime, please call the Sheriff’s Office.”

Detectives who have special training in arson are heading the investigation with the Sheriff’s Office Property Crimes Unit.

A similar incident happened two weeks ago in Canada.

An arsonist in the Canadian province of Ontario caught fire while trying to burn down a local business.

The incident, which was captured on CCTV, took place at an unnamed company in the city of Sarnia on Feb. 21. Sarnia is located at the point where Lake Huron flows into the St. Clair River at the Canada–U.S. border.

A hooded man was seen on footage wearing dark clothing before smashing the front-door window with an object and entering the building with a container of what was assumed to be flammable liquid.

A fireball soon erupted as the arsonist fled with flames on his back. He then ran across the lot as the fire enveloped the business. There were no reports of the arsonist’s identity at the time the crime took place.

Police also reported individuals starting a fire in the lobby of a residential apartment on Feb. 7, located near the site of the truckers’ demonstration against COVID mandates on the Ambassador Bridge.