Sounds Fishy: New Website Offers Repository Of Fish Sounds From Around The World

In the future, scientists and fishers may use underwater microphones to identify the fish they are looking for.
By Martin M Barillas March 7, 2022
Facebook
Twitter
Linkedin
Email 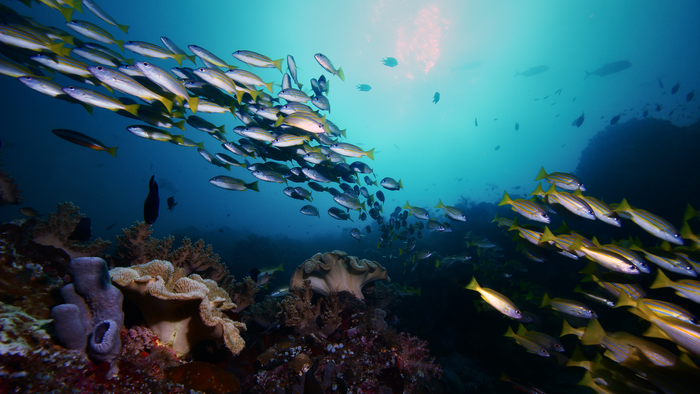 Fish make sounds to communicate with each other on everything from food and sex to territory. Researchers are creating a database of these sounds, which may be able to identify the fishes making them. (Kieran Cox)

If you’ve seen fish in an aquarium or pond moving their lips, you might be surprised to learn they were probably making sounds that other fish, at least, may understand.

Observers have long documented the songs and trills of birds all over the world, distinguishing various species from each other and the purported meanings of their sounds. Moreover, whales and dolphins sing and squeak and use sound for echolocation.

Yet it still comes as a surprise to many people that fish make sounds, according to researcher Audrey Looby of the University of Florida, lead author of a new study published in Reviews in Fish Biology and Fisheries.

“You could make the case that they are as important for understanding fish as bird sounds are for studying birds,” Looby said.

“Fish sounds contain a lot of important information,” she said, adding that they may be communicating about predators, food, sex and territory. “And when we can match fish sounds to fish species, their sounds are a kind of calling card that can tell us what kinds of fish are in an area and what they are doing,” she said.

While previous studies have recorded and analyzed fish sounds, many of those recordings have not been accessible to the public before now.

On the website are audio files and fish sound visualizations for browsing, organized by species and sound name. If visitors select the “boop” sound, they can hear the Bocon toadfish (Amphicthys crytocentrus). In its native habitat in Central American and Caribbean countries, it is known as Bocón, which is Spanish for “big mouth.” It is closely related to a fish Looby is researching while working at a biological research station in Cedar Key, Florida.

“There’s no standard system yet for naming fish sounds, so our project uses the sound names researchers have come up with. And who doesn’t love a fish that boops?” said Looby.

She and the creators of FishSounds.net expect that visitors to the website will contribute their own recordings of fish sounds. The team is working on further interactive features, including a clickable world map with fish sound data points.

The researchers reviewed scientific reports of fish sounds dating back nearly 150 years. Toadfish and other denizens of the deep have organs or structures that produce so-called “active sounds.” Other fish make passive, incidental sounds such as chewing but even these may transmit information.

Some fish bear names that pay tribute to the sounds they make, such as croakers, grunts and squeaking catfish. The study found that almost 1,000 fish species make active sounds, and several hundred were studied for passive sounds. However, these numbers may not be accurate. Because sound travels faster underwater than through air, researchers have concluded that making sounds is effective for communication, especially in low visibility areas.

For scientists, conservationists and the fishing industry to study the movements and location of fish, they could use underwater microphones known as hydrophones. But identifying the species making the sounds will be important.

“There are probably a lot of fish sounds that just haven’t been recorded. That’s why we’ll continue to review new studies coming out and add [them] to the repository. This is truly an international… project with much more to come,” said study co-author Kieran Cox of the University of Victoria, British Columbia.