VIDEO: WWII Enigma Machine, Other Encryption Devices Dating Back To 1870 Scanned And Modeled

The Deutsches Museum in Germany is working to unveil the secrets of the encryption devices.
By Joseph Golder March 6, 2022
Facebook
Twitter
Linkedin
Email 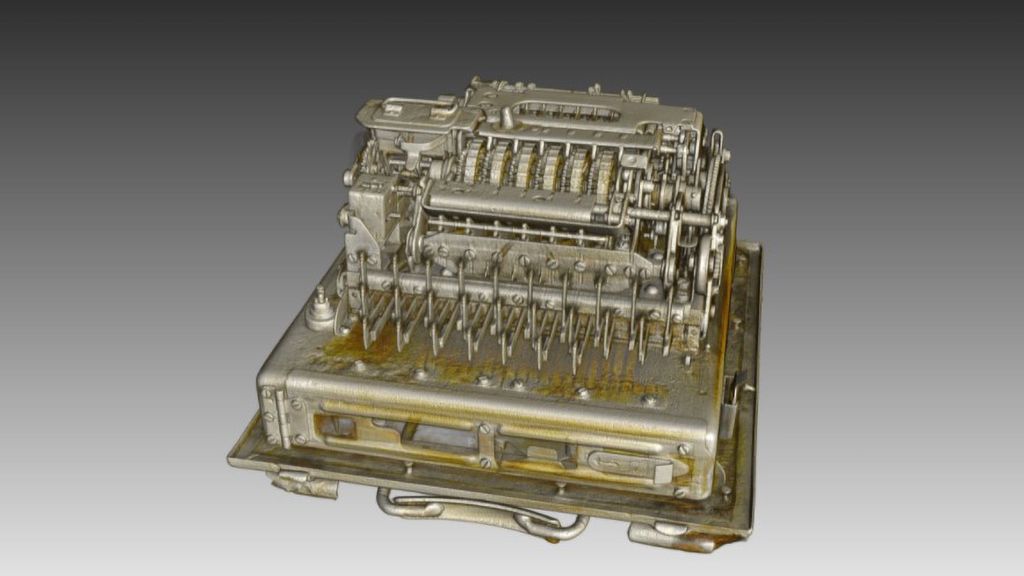 A scanned image of key device 41, a lesser-known successor to the Enigma machine that was used by a small number of people working for Germany's intelligence services toward the end of World War II. (Fraunhofer IIS/Zenger)

Experts in Germany have scanned the inner workings of encryption machines dating back to the 1870s, including the famous Enigma machines used by the Nazis in World War II.

The Deutsches Museum in Bonn, which has been described as the world’s biggest science and technology museum, says it has scanned the devices and created 3D models of them.

The inner workings of the devices “are one of the best-kept secrets of all,” the museum pointed out. “After all, the machines themselves were secret carriers: cipher machines with which the military, secret services, but also banks encoded their messages.”

“We expect this research project to provide us with new insights into the construction of encryption devices and how they work,” said Carola Dahlke, a cryptography curator at the Deutsches Museum.

“The Enigma has been researched quite well, but other encryption devices simply cannot be opened without being destroyed,” Dahlke said. “Some encryption devices are welded or even filled with a mysterious substance that ensures that the inner workings of the machine are destroyed when the housing is opened.”

The sophisticated Enigma machine was improved under Adolf Hitler’s Nazi regime in World War II in a bid to encrypt sensitive military communications. British cryptologists led by Alan Turing deciphered many German messages during the war, and information they gathered after “cracking the code” gave the Allied war effort a significant boost against the Third Reich, historians have said.

The museum said it has also scanned the lesser-known Key Device 41 (SG-41), which is a mechanical key machine that looks a bit like a typewriter and was used toward the end of World War II by small numbers of people working for Germany’s intelligence services.

Sixty encryption devices have been scanned so far, using a “particularly powerful X-ray machine” that revealed “the final secrets of their construction.”

Scanning the devices takes a lot of time, the museum said, which is why they are scanning them in batches.

“For this purpose, a special device called PolyCT was set up, which guarantees the highest image quality for each of the five encryption machines to be scanned simultaneously and thus makes the scan of entire collections particularly efficient,” said Michael Salamon, head of the High Energy X-ray Systems group.

Matthias Goeggerle, who is in charge of the “3D-Cipher” project at the Deutsches Museum’s research institute, said that at the end of the scanning work, the museum will have “3D models of all 60 cipher devices that date from the 1870s to the 1990s.”

“With 3D models like this, you can, for example, make replicas of the Enigma and other encryption devices that are accurate to the millimeter,” Dahlke said.