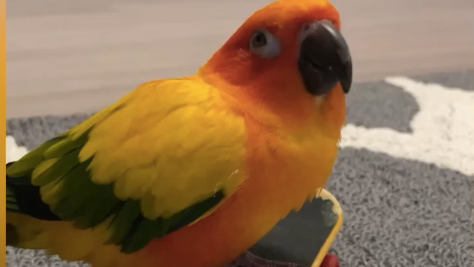 Pluto, the 5-year-old parrot from Austin, Texas, is a skateboarder. (@plutobirdie/Zenger)

In addition to doing various stunts, including skateboarding, they also get up to mischief. When they get the chance, they steal food and hide.

The owner of the parrots, Katy Goerss, is from Austin, Texas, and she posts their antics on Instagram.

Goerss said in an interview that one of the parrots is 5-year-old Pluto, who belongs to a species named sun parakeet, and the other parrot is 9-month-old Cassini, who is a black-headed caique.

In the footage, Cassini is seen singing in the shower, standing on a spinning ceiling fan and eating his owner’s tacos. Pluto can be seen skateboarding and flying back to his owner.

Goerss said: “Pluto can skateboard, roll over, kiss, spin around, wave and show his wings on command. He eats mainly vegetables, pellets and some fruit and seed, but just for treats.”

She said it is challenging to care for the birds because there are many dangerous items they need to avoid, such as certain kinds of cooking ware, air fresheners and candles. Goerss said her pets are very loud, and it takes a patient person to care for them. They are still considered wild versus domesticated animals.

She said: “If we cannot find Pluto, he is either stealing our food or in dad’s cowboy boots.

Sun parakeets are native to northeastern South America, including Venezuela, Brazil, and Guyana. Like many parrot species, they can mimic the sounds they hear, but they are particularly known for their shrill screams.

Intelligent and trainable, parrots are known for having playful personalities that work well in a family setting. Some can even mimic various types of sounds, such as doorbells and microwave buzzers.

However, the sun parakeets population is dwindling rapidly, due to the loss of habitat and trapping by the pet trade. Populations have dipped drastically over the past three decades, despite the U.S. import ban of 1992 and European Union ban in 2007, according to the World Parrot Trust.

The black-headed caique is found from southern Colombia to northeastern Peru and eastern Ecuador. They are considered strong-willed little birds. Caiques are sociable in their family groups, and they prefer to have another bird as a companion. They often perform tricks and pranks for the pleasure of an audience.

While not known for their talking ability, the species is known to mimic the sounds they hear, and can reportedly whistle musical tunes if they hear a song often enough.