The women said their unusual attire was a hit on the slopes. It wasn't done to embarrass their exes.
By Georgina Jadikovskaall March 6, 2022
Facebook
Twitter
Linkedin
Email 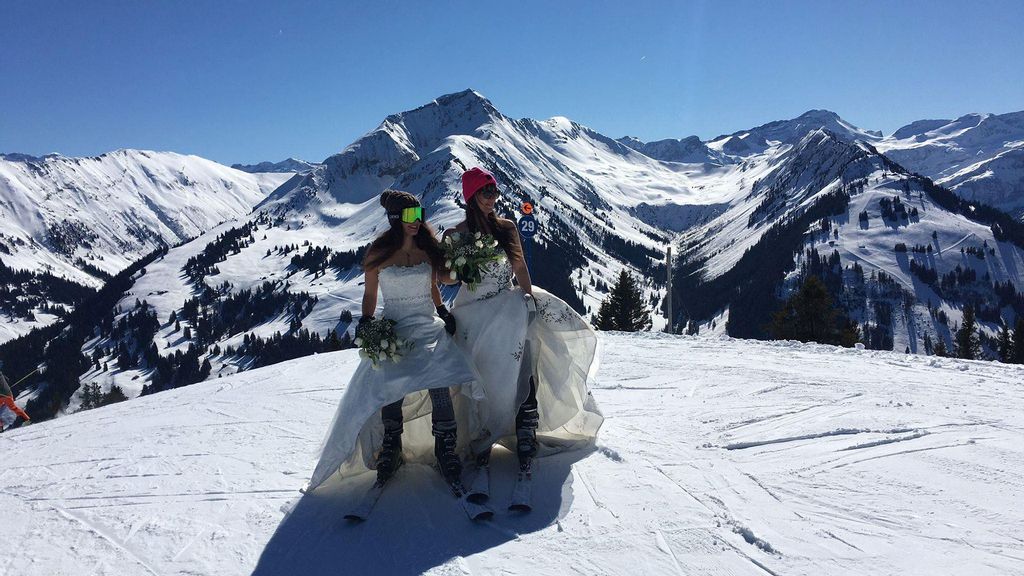 Sisters Sandra and Andrea Vonlanthen celebrated their divorces and Andrea's 30th birthday by going skiing in their wedding dresses in the Bernese Highlands in Switzerland. (Sandra Vonlanthen/Zenger)

Two sisters celebrated their respective divorces by going skiing in the Swiss Alps in their wedding dresses.

Sandra and Andrea Vonlanthen of Bern, Switzerland, braved the cold of the Saanenmoeser Pass near the Swiss ski resort of Gstaad to celebrate their single status in style.

Sandra separated from her husband eight years ago, while Andrea, parted ways with her spouse in 2020.

They both decided to get their money’s worth out of their pricey wedding dresses and put them to good use on the Swiss slopes on Feb. 28.

Sandra said: “The idea of &ZeroWidthSpace;&ZeroWidthSpace;skiing in my wedding dress came up spontaneously last winter because my sister’s divorce was only a few months before that.”

She said: “The wedding dresses were way too pretty to be gathering dust in the wardrobe, so we thought they needed one last performance. We could celebrate the divorce and my sister’s 30th birthday at the same time.”

Sandra said that both she and her sister are happily divorced and are no longer in contact with their ex-husbands.

Of the unusual decision, Sandra said: “It has nothing to do with humiliating or embarrassing our ex-husbands.”

When asked how other skiers reacted to the pair’s unusual attire, Sandra said: “Most skiers guessed we were either having a wedding party or a hen do. No one suspected that we were celebrating our divorces. And very few believed that we were sober on the slopes.

“The reactions on the ski slope were all very positive, and the skiers had a lot of fun taking photos with us. And although there were almost only negative comments on social media, my Facebook account was flooded with messages and inquires the next day, all of which were positive.”

After bringing the dresses home in good shape, the sisters are getting ready for their next adventure, wondering “what the next crazy wedding-dress act could be.”

The sisters are not alone in offbeat post-divorce actions.

In 2008, after ending their 18-year marriage, a couple in Cambodia split their joint asset, a wood house, by sawing it in half. A judge in Spain ordered a couple to create two residences in a 2,700-square-foot apartment, ruling it would save them money and be better for their kids, reported USA Today.

The quirkiest incident may be the case of a British woman who donated a kidney to her husband to save his life. Four years later, he left her — and she demanded her kidney back, reported HuffPost.