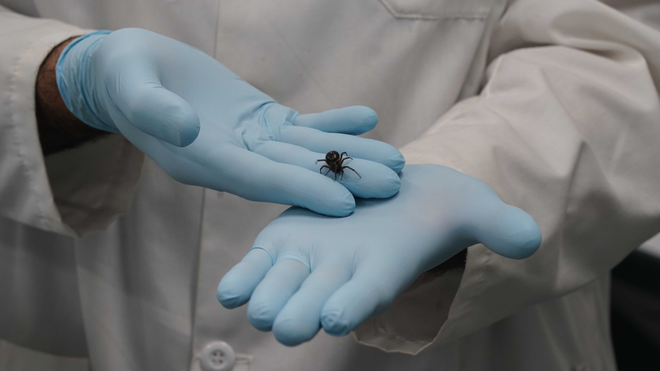 Noble false widow spiders (Steatoda nobilis) originated in the Madeira and Canary archipelagos but have spread to the British Isles and North America. Using a powerful neurotoxin, they paralyze their prey to feed on them. Their bite can be harmful to humans and spreads antibiotic-resistant bacteria. (NUI Galway)

A foreign invader is devastating endangered animal species in the British Isles, according to a new study that reveals the first record of a noble false widow spider feeding on Pipistrelle bats.

First observed in southern England in 1879, the spiders, also known by their taxonomic name Steatoda nobilis, are native to the Madeira Islands of Portugal and the Canary Islands of Spain. Since then, the spiders have spread to Ireland, Scotland and Wales as well as to East Asia, Europe and the Americas.

A study published in the journal Ecosphere indicates that these spiders are a danger to both people and animals. The study showed for the first time that the spider is preying on vertebrates. This is also the first time it has been recorded as predating on mammals.

Wildlife photographer Ben Waddams of Shropshire, England, made the discovery in the attic of his home. There, he found a Pipistrelle bat (Pipistrellus pipistrellus) entangled in a spider web near the entrance of the roost. The young bat was completely immobile, with its wings closely bound to its torso by sticky silken strands. The spider had fed from the remains, which appeared discolored and shrunken.

Waddams found an adult bat also entangled in the spider’s web, but it was still alive. He rescued the bat and released it. Pipistrelle bats are protected by the Wildlife and Countryside Act and the Conservation of Habitats and Species Regulations of the United Kingdom. The spiders are not picky: three years ago, a noble false widow spider was seen eating a native viviparous lizard in Ireland.

Noble false widow spiders have a neurotoxic venom that is fast-acting and resembles the venom of true black widows. A bite leads to paralysis in its victims, allowing the spiders to drain the fluids from small vertebrates.

“In more exotic parts of the world, scientists have been documenting such predation events by spiders on small vertebrates for many years, but we are only beginning to realize just how [commonly] these events occur,” said study co-author John Dunbar of the Venom Systems Lab at the National University of Ireland (NUI) in Galway.

“This study presents yet another example of the invasive impact [of] the Noble false widow spider on native species. We know they are much more competitive than native spiders, and this further confirms their impact on prey species.”

The spider is also dangerous to people because bites can cause mild to severe reactions, including fever and intense pain. A 2020 NUI study, published in the journal Scientific Reports, showed that these spiders can transmit antibiotic-resistant bacteria, including class 2 pathogens Staphylococcus epidermidis, Kluyvera intermedia, Rothia mucilaginosa and Pseudomonas putida.

NUI researcher and co-author Michel Dugon said he and his colleagues have learned a great deal about the spider over the last five years, noting that they are “…still surprised by its ability to adapt to new environments and make the most of the resources available. It is a truly remarkable species.”

Acknowledging reports of the spiders’ feeding on protected vertebrates in the British Isles, Vitkauskaite said that as its range and population grow, “we should expect to observe similar predation events on small vertebrate animals by this spider, including protected species.”

«Previous Post
One For The Horse-tory Books: Horse Rescued After Falling Into 15-Foot Well»Next Post
VIDEO: WWII Enigma Machine, Other Encryption Devices Dating Back To 1870 Scanned And Modeled