Mummification In Europe May Be The Oldest In The World

While the Chinchorro mummies of Chile date back to 7000 B.C., a new study shows Portugal has much older preserved bodies.
By Martin M Barillas March 5, 2022
Facebook
Twitter
Linkedin
Email 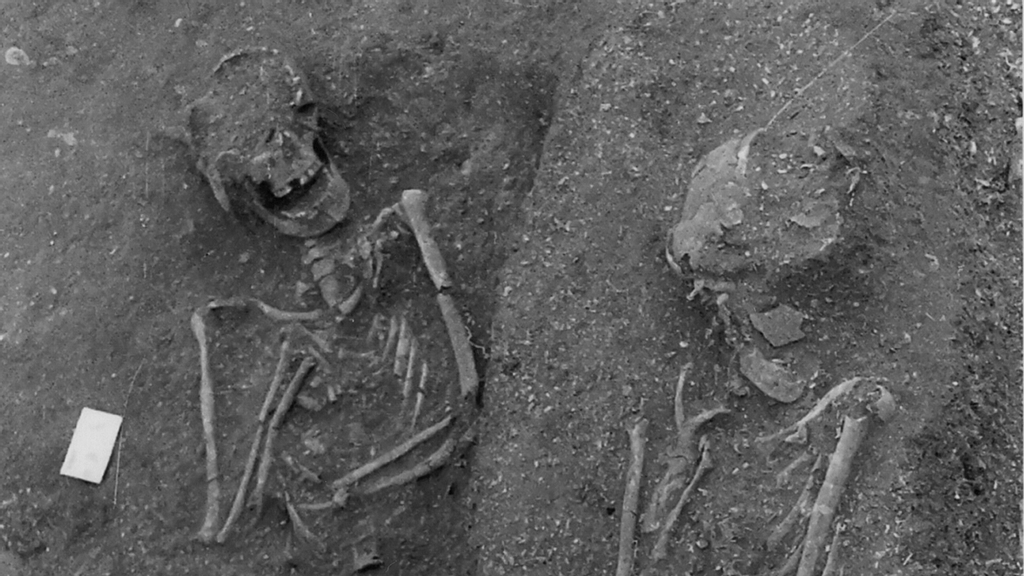 Arapouco 1962. Skeleton 3A is visible on the left of the photograph, lying on the right side of skeleton 2A. These burials illustrate several traits common to the Sado Valley burials during the Mesolithic period. (Peyroteo-Stjerna et al., 2022/European Journal of Archaeology)

Archeologists now believe that Europeans engaged in preburial mummification procedures, such as the desiccation of corpses, as early as 8,000 years ago, far earlier than previously believed.

An international team of archeologists, led by Rita Peyroteo-Stjerna and Liv Nilsson Stutz, recently published a study in the European Journal of Archaeology proposing that Stone Age mummification was more common than previously thought.

Acha Man, found in Chile’s Atacama Desert and dating back to 7020 B.C., is considered the world’s oldest naturally mummified corpse. The oldest artificially mummified remains were also found in this arid region, preserved by the ancient Chinchorro culture, dating back to about 5000 B.C. By contrast, the oldest known mummies of Egypt date back to around 3000 B.C. But new evidence shows that Europe’s Mesolithic period may have seen the practice much earlier.

The arid Atacama allowed the preservation of soft tissue and hair on mummified bodies buried in piles of discarded seashells known as “middens.” The method used by the Chinchorro people consistently involved removing the brain, skin and organs, while the bones were reinforced with sticks. The skin was stuffed with vegetable matter and the corpse reassembled to dry out for a month. The aridity and soil nitrates considerably aided their preservation.

In Europe, however, preservation is more difficult because of the humidity and temperate climate, which hastens the decay of soft tissue and fabrics. Without soft tissue, it is hard for archeologists to know if bodies were curated, or treated, soon after death.

The researchers examined recently discovered photographs of 13 skeletons found decades ago in the Mesolithic shell middens of Portugal’s Sado Valley. In Europe, the Mesolithic period spans from about 15000 B.C. to 5000 B.C. The researchers reconstructed the positions in which the dead were buried, gaining an idea of their 8,000-year-old burial practices.

For the study, the team combined modern experimentation on human decomposition and mummification, conducted at the “body farm” curated by the Forensic Anthropology Research Facility at Texas State University, with the techniques of archeothanatology, which are used to document and analyze buried bones.

They were then able to reconstruct how bodies were treated after death and burial, even though thousands of years had passed. Forensic anthropologists, for example, can make educated guesses about the manner of death and even the identity of deceased persons by examining bones and making reconstructions. Law enforcement can then use their results to solve murder cases, among other things.

The burials at the Sado Valley site showed that the legs and knees of the skeletons were flexed against their chests before burial, possibly due to being bound by ropes or bandages. The researchers also found that the bones were not dislocated or disarticulated at the joints. Normally, during decomposition, bones separate at weak joints such as the feet. Because these articulations were maintained, the archeologists believe that the bodies were not fresh cadavers upon burial but were interred as desiccated mummies.

With the drying of the corpse and resulting loss of soft tissue, flexing the legs would have been easier. Also, because the team found very little or no sediment between the bones and the joints, they concluded that the bodies were desiccated before interment. This means that the bodies may have been subjected to a guided, natural mummification, where they are manipulated and moved over time, allowing gradual desiccation while maintaining their integrity.

Through desiccation and contraction, these bodies would have been lighter than a fresh corpse and easier to transport to their final resting place.

Responding to questions from Zenger, Peyroteo-Stjner and Nilsson Stutz confirmed the age of the Atacama mummies, adding via email, “There are also some historic records that mention buried mummies from mainland South America, Hispaniola and at the Torres Strait between Australia and Papua New Guinea.”

Interestingly, mummies of three infants were found in Chile, dating back to 2600 B.C., wrapped with animal and human skin, much like ancient Egyptians’ bandages.

“This is by far the oldest evidence we have from Europe, where the earliest cases of mummification previously were assumed to be from the Bronze Age [British Isles], around 3,300 years ago,” they said, referencing the Sado Valley remains.

Much more modern cultures have burial practices similar to those suggested for ancient Europe. “There are recent examples from the Philippines and Papua New Guinea where bodies were desiccated and transported up a rock overhang, where they can be viewed and revisited. Transportation of curated bodies has also been mentioned by Herodotus, when he described the mortuary rituals of steppe tribes from [the] Siberian central Asian plateau, suggesting a cross-cultural phenomenon,” the authors wrote.

In their study, the researchers assert that if European mummification is as old as they believe, it highlights the importance of both the human body and its burial in a Stone Age culture. This reveals a “central concern for maintaining the integrity of the body and its physical transformation from a cadaver to a curated mummy” and the importance of bringing it to the burial place without damaging it.