After getting fitted for a custom harness and receiving plenty of cuddles, Ouka was ready to fly.
By Adriana Navarro March 4, 2022
Facebook
Twitter
Linkedin
Email 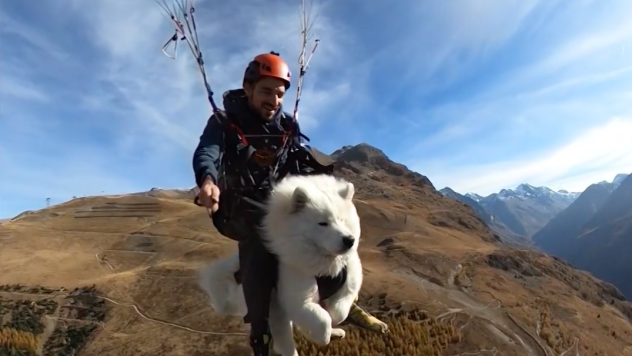 Shams and Ouka, a three-year-old Samoyed, paraglide through the Alps. (Shams/@Ouka.sam)

Ouka, a three-year-old Samoyed, never seemed to be afraid of heights.

That was the first thing that his owner, who goes by the nickname Shams, checked before seeing if Ouka would be comfortable flying through the Alps.

The Samoyed loved hiking through the mountain, and Shams, a paraglider in his free time, decided it would be easier to end their hikes with a glide back down to the van where the two lived. If Ouka was comfortable with that, of course.

Already he seemed fearless when it came to looking down across valleys carved into the Alps.

“When we are on the hike, he’s standing on the edge of the cliff looking down there, not afraid at all,” Shams told AccuWeather National Reporter Jillian Angeline.

After spending time with other pilots, getting fitted for a custom harness and receiving plenty of cuddles, Ouka was ready to fly.

Paragliding doesn’t involve a plane, so Shams trained Ouka to run and take off with him. They started with short flights — one minute in the air, then five, then 10 to 15 minutes. Finally, they were able to stay in the air for an hour. As of the day of the interview, the two have gone on a total of 10 flights.

“To fly with Ouka, we need the perfect weather conditions,” Shams said. That means they must be facing winds of around 6 mph (10 km/h), but no more than 12 mph (20 km/h), or else there will be turbulence. They also avoid flying around midday due to the thermals, or sun-warmed air that rises, which can also cause turbulence.

With a fluffy, warm coat, Ouka is perfectly comfortable in the cold, mountainous region. And even when temperatures dip below 32 degrees Fahrenheit (zero degrees Celsius), Ouka still seeks out the shade when the sun comes out, Shams said.

“When it’s zero degrees in the morning and the sun comes up, he’s going in the shadows because it’s already sunny and [he] prefers when it’s super cold,” Shams said. “So even at minus-20, he’s still good to go because he has a big fur [coat], so he’s never cold, and it’s maybe more when it’s [a] warm temperature you have to take care.”

Samoyeds were bred to work in one of the coldest regions of the world as sled dogs, according to the American Kennel Club, and their name comes from the Samoyedic people, who had migrated to Siberia thousands of years prior.

They are also extremely active, which was another reason Shams decided that Ouka would be the perfect dog to join him on his adventures. But it had been because of this need for activity that Ouka had been abandoned by two previous owners.

Shams adopted Ouka in 2021 and said the dog helped him get back on his path during the pandemic.

“I think he needed me as much as I needed him,” Shams said.