Save The Date: Stonehenge Calendar Confirmed 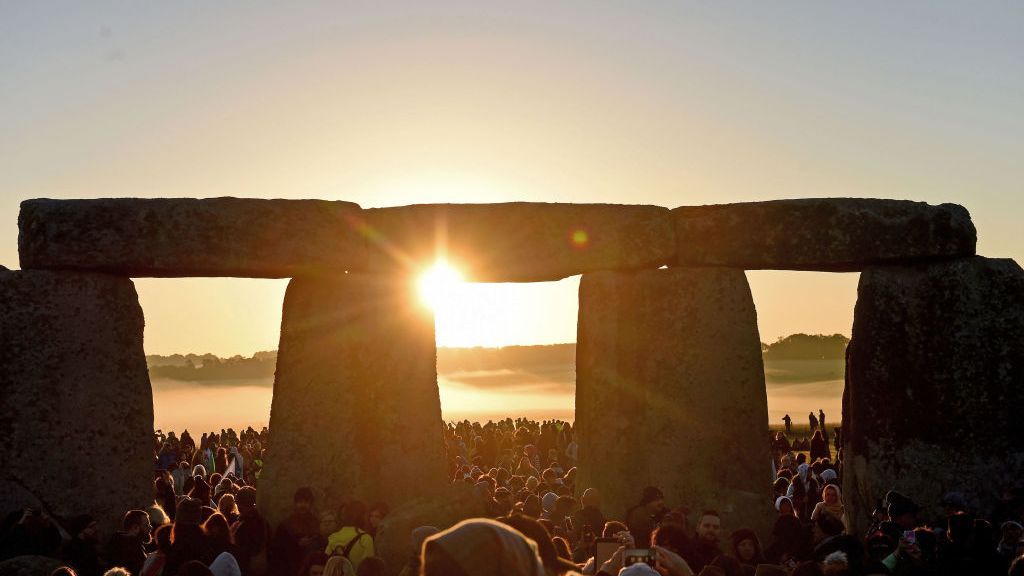 Visitors celebrate summer solstice and the dawn of the longest day of the year at Stonehenge on June 21, 2019, in Amesbury, England. Visitors and modern-day druids gather at the 5,000-year-old stone circle in Wiltshire to see the sun rise at dawn on the Summer Solstice in a tradition dating back thousands of years. The solstice sunrise marks the start of the longest day of the year in the Northern Hemisphere. (Finnbarr Webster/Getty Images)

Ancient Britons built Stonehenge as a calendar, based on the summer and winter solstices, in a format that resembles Ancient Egyptian calculations, according to a new study.

For many years, experts have theorized that England’s famed Stonehenge served as a calendar, based on its alignment with the solstices. Now a protected national monument, the concentric rings of standing stones have given rise to conjecture, myth and archeological excavations for more than 100 years. But new discoveries prompted researcher Timothy Darvill of Bournemouth University, England, to draw some conclusions about the mysterious stones.

“The clear solstitial alignment of Stonehenge has prompted people to suggest that the site included some kind of calendar, [and they have been doing so] since the [time of] antiquarian William Stukeley,” said Darvill, author of a new study published in the journal Antiquity. “Now, discoveries brought the issue into sharper focus and indicate the site was a calendar based on a tropical solar year of 365.25 days.”

Stukeley was an 18th century Anglican cleric who believed that Stonehenge gave evidence that Britain’s ancient druids practiced a monotheistic religion and that the stone circle was evidence of a Trinitarian belief system. Though a pioneer in archeological practices, he incorrectly calculated that Stonehenge was erected in 460 B.C.

Since then, however, research has shown that the site’s sarsens — the large, rectangular sandstone standing blocks — were erected around 2,500 B.C. and formed the outer perimeter. The sarsens, according to the study, were brought from the same place and remained in the same formation, which means they had been worked on as a single unit.

Darvill conducted analyses of the stones and their numerology while making comparisons with calendars used in the period studied. In doing so, he concluded that the ancient Britons had created a solar calendar with the arrangement of the stones, which served as a representation of the year and tracked the passage of days, weeks and months.

“Each of the 30 stones in the sarsen circle represents a day within a month, itself divided into three weeks each of 10 days,” Darvill said, adding that specific stones in the circle signify the beginning of each week.

“Such a solar calendar was developed in the eastern Mediterranean in the centuries after 3000 B.C. and was adopted in Egypt as the Civil Calendar, around 2700 [B.C.], and was widely used at the start of the Old Kingdom, about 2600 B.C.,” Darvill said. This means that the ancient British calendar may have been influenced by distant cultures.

To reconcile the solar year, which is about 365.24 days long, with the calendar year, the ancient Britons inserted an intercalary month of five days and a leap day every four years. “The intercalary month, probably dedicated to the deities of the site, is represented by the five trilithons in the center of the site,” said Darvill. Each of the trilithons consist of two vertical stones capped by a horizontal lintel, resembling a doorway.

Outside of Stonehenge’s circles are the four Station Stones, which form a superimposed rectangle on the complex. Darvill described these as “markers to notch up until a leap day.”

The study found that the solstices are framed by the same pairs of stones each year, while one of the trilithons also frames the winter solstice — which may have been considered the New Year. It may have also calibrated the calendar to account for errors in counting the days.

Evidence that ancient Britain was in contact with advanced cultures of Europe and the Middle East is the so-called Amesbury archer, who was buried near Stonehenge at the time that Stonehenge’s inner ring of bluestones were put into place. The man was apparently born in the Alps more than 4,000 years ago and moved to ancient Britain while still a teen, dying at around 40 years of age.

Given a lavish Bronze Age burial, the Amesbury archer may have been a high-status individual, as suggested by the many copper and ceramic goods buried with him. In 2007, Darvill said he had come to Stonehenge as a pilgrim for its reputed healing properties. Archeologists have noted that the archer was missing a kneecap and may have endured a painful infection.

“Finding a solar calendar represented in the architecture of Stonehenge opens up a whole new way of seeing the monument as a place for the living — a place where the timing of ceremonies and festivals was connected to the very fabric of the universe and celestial movements in the heavens,” Darvill said.