Wearing only a shirt, windbreaker and pants, the man was swept into the 38-degree waters of the Cook Inlet off Anchor Point.
By Marianne Mizera March 4, 2022
Facebook
Twitter
Linkedin
Email 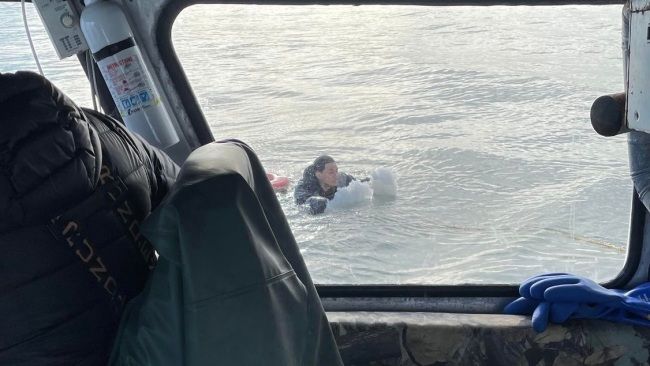 Jaime Snedden, 45, of Homer, Alaska, clings onto a chunk of ice in the frigid waters in the Cook Inlet near Anchor Point in Alaska, on Feb. 26, 2022. (Peder Reiland)

Jaime Snedden was walking along the southern Alaskan shoreline when suddenly a chunk of ice broke off right from under him and quickly swept him into the frigid waters heading out to sea.

The 45-year-old from Homer, wearing only a shirt, windbreaker and pants, found himself practically submerged in the 38-degree waters of the Cook Inlet off Anchor Point, clinging to the large slab of ice for nearly an hour Saturday morning. Anchor Point is about 120 miles south of Anchorage.

Only his “head and arms were visible” as he struggled to stay afloat amid the swift-moving currents, according to Alaska Wildlife Troopers.

Fortunately, a U.S. Coast Guard alert about Snedden’s dire situation caught the attention of a local charter fishing boat, the Misty, about 3 miles away and the vessel rushed to his aid, Tim DeSpain, information officer for the Alaska Department of Public Safety, told AccuWeather.

The boat, carrying the captain and four friends who were out fishing, pulled up to Snedden about 300 yards offshore near the mouth of the inlet around 11:45 a.m., just as Trooper Jeremy Baum was approaching in a raft. The men moved quickly to bring Snedden, who was still conscious, aboard, get him out of his wet clothes, throw on dry clothes and carry him into a heated cabin as the captain, Shane Balkely, motored closer to shore.

The group then started checking him over, assessing his condition.

“As luck would have it, we just happened to have an Anchorage firefighter, a physician assistant and a respiratory therapist on board,” said Peder Reiland, a salesman and one of the friends, who basically “stayed out of the way.”

Despite his condition, he was able to answer some basic questions, Reiland noted.

“He had a little bit of strength left,” Reiland said. “He was able to speak through his chattering teeth and shaking body.”

They threw more warm clothes on Snedden before moving him onto the boat’s 8-foot inflatable raft and shuttling him to a waiting ambulance on the shore.

“We could see the emergency vehicles,” Reiland said.

Snedden was taken to South Peninsula Hospital, where he was treated for hypothermia and was “expected to fully recover,” said DeSpain.

Hypothermia occurs when the core of the body (as opposed to the limbs) reaches dangerously low temperatures — dropping to 95 degrees Fahrenheit (35 degrees Celsius) or lower. As it sets in, a person will begin shivering and have movement problems, such as poor coordination and slowing down. People will also appear dazed, disoriented or confused and may have slurred speech.

If hypothermia becomes severe enough, respiration and heart rates can slow to critically low levels – people can lose consciousness and may eventually die.

Officials said Snedden was very fortunate, especially with the Misty responding so quickly.

“Without their help, it would have been much more challenging to rescue Snedden and get him to EMS as quickly as we did,” Baum told the Anchorage Daily News.

The ordeal, officials said, shed light on the dangers of thinning and melting ice.

“We have been going through a period of much warmer weather,” warned Robert Mathis, deputy fire chief of Western Emergency Services in Kenai Peninsula Borough. “The ice is starting to become treacherous, and if you don’t know the ice conditions, stay off the ice.”

Outside temperatures at the time of the incident were in the high 30s to low 40s F range, according to Reiland, who also added that Cook Inlet “is known for its tidal changes,” making it rather dangerous.