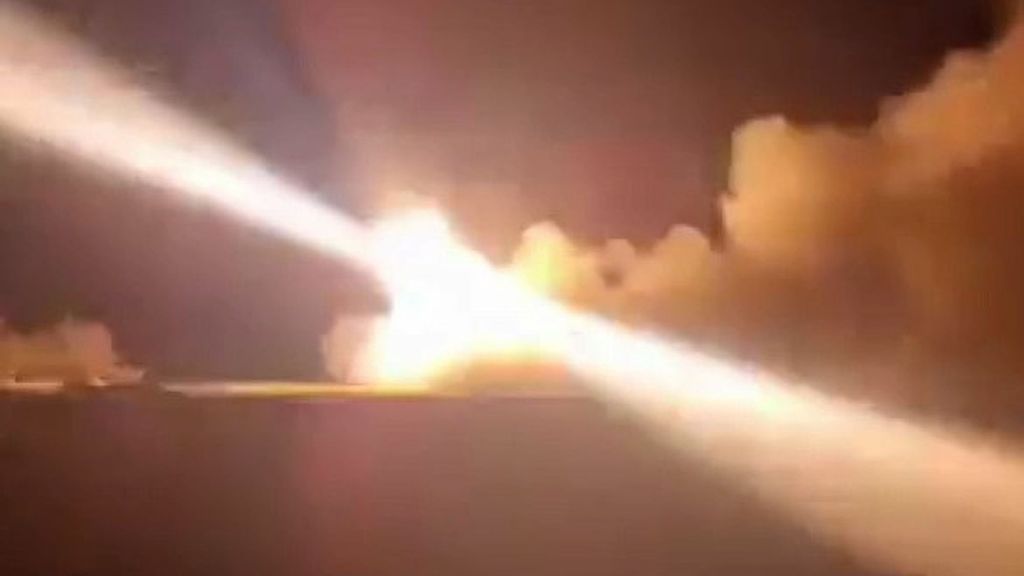 Ukrainian artillery striking at Russian troops is seen in this screenshot from a video. (Ukrainian Joint Forces Operation/Zenger)

Ukrainian forces have shared images on social media of their success in battling the much larger and much better-equipped Russian military, claiming to have “destroyed columns and groups” of invading Russians.

“Ukrainian artillery works, as always, clearly, accurately and as efficiently as possible,” the statement said.

In a separate post, the 93rd Independent Kholodnyi Yar Mechanized Brigade, a formation of the Ukrainian Ground Forces, shared images of a destroyed Russian military column in the northern Ukrainian region of Sumy Oblast.

The brigade said the column “tried to pass along a bridge that the occupiers forced local residents to rebuild.”

The General Staff of the Armed Forces of Ukraine said on social media: “Yesterday it was reported about the unworthy behavior of the Russian occupiers in Sumy oblast. They thought they were “towering warriors”, in the sense of being fearless.

“Ukrainians have shown what an occupier without a tower really looks like. Photo courtesy of the 93rd Independent Kholodnyi Yar Mechanized Brigade.”

“They wanted to destroy us so many times. They couldn’t. We’ve been through so much! And if someone thinks that, having overcome all this, Ukrainians will be frightened, broken or surrender, he knows nothing about Ukraine and he has nothing to do in Ukraine,” Ukrainian President Volodymyr Zelensky said on Thursday. “We have nothing to lose but our own freedom.”

However, Russian bombs and missiles continued to do significant damage in Ukraine. On Thursday morning, a huge fire erupted at an oil terminal in the city of Chernihiv in northern Ukraine after being shelled, and at least 22 people were killed in an attack on a residential neighborhood of the city.

Russian and Ukrainian negotiators talked for the second time Thursday about ways to end a war that is now in its eighth day.

“Unfortunately, the results Ukraine needs are not yet achieved,” Ukraine presidential adviser Mykhailo Podolyak tweeted at the end of Thursday’s talks while Russia’s lead negotiator said the two sides had agreed to open “humanitarian corridors” for civilians to leave Ukrainian cities.

Vladimir Medinsky said that both sides had agreed to a possible “temporary cease-fire” in some “sectors” connected to the humanitarian corridors and called that move a “substantial” accomplishment.

The United Nations said Thursday that more than a million people had fled Ukraine since the conflict began.

Also on Thursday, U.S. President Joesph R. Biden Jr. met virtually with the prime ministers of Australia, India and Japan to discuss the conflict and other issues.

“They agreed to stand up a new humanitarian assistance and disaster relief mechanism which will enable the Quad to meet future humanitarian challenges in the Indo-Pacific and provide a channel for communication as they each address and respond to the crisis in Ukraine,” the White House said in a statement.

The United States, Australia and Japan had supported a resolution at the U.N. General Assembly to demand an immediate halt to Moscow’s attack on Ukraine and the withdrawal of all Russian troops. India abstained from Wednesday’s vote.