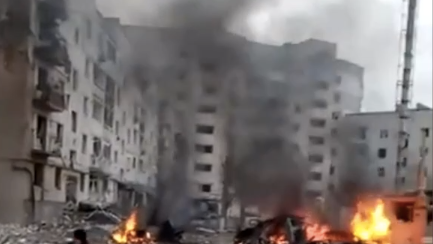 Hundreds of civilians were evacuated from Borodyanka, Kyiv region, March 2 after Russians attacked the city. (SES of Ukraine/Zenger)

Devastating images show Borodyanka near the Ukrainian capital of Kyiv reduced to rubble and smoldering fires, amid reports of residents being trapped for days in bombed-out basements.

The shocking scenes were filmed in the urban settlement of Borodyanka, close to Kyiv. The footage was shared on social media by the State Emergency Service (SES) of Ukraine on Thursday, March 3.

SES in Kyiv Oblast said rescuers and volunteers evacuated over 200 people in Borodianka and saved several residents who were trapped under rubble in bombed-out basements and cellars.

The SES statement said: “Rescuers in the district of Buchansky, together with volunteers, evacuated over 200 residents of Borodianka. People were trapped under the rubble of buildings for over two days, they were in basements and cellars.”

The morning of March 3, residents in the capital, Kyiv, woke to the sound of air raid sirens and loud explosions.

Bomb blasts were also reported by citizens in Odessa, Kharkiv and other cities.

He said: “Dear people of Kyiv! Ukraine has been attacked by an aggressor. The roar of shells is heard in Kyiv. The most terrible enemy now is panic. We should not lose our temper. Everyone who is not involved in the work of the critical infrastructure and life support of the city should stay at home. Keep your ‘emergency suitcase’ ready.”

Khariton Starsky, spokesperson for the National Guard’s Rapid Reaction Brigade, said: “According to preliminary information, our air defense shot down two Russian missiles over Kyiv during the night. Most likely, they tried to hit the area of the Ministry of Defense.”

Starsky said Russian soldiers tried to capture the area of Ivankiv, but were beaten back and images of burned enemy equipment were shared on social media. He said: “Ukrainian troops are pushing the enemy back toward Russia. It is no longer possible to say that it [Ivankiv] is occupied.”

In Kharkiv, the SES reported the morning of March 3: “The enemy is so afraid of ordinary Ukrainian peasants that they began to cynically destroy entire villages.

“As previously reported, 2.03.2022 [March 3] at 22:57 [10:57 p.m.] an enemy air attack hit the village of Yakovlivka Merefyan in Kharkiv district. At least 30 private homes were destroyed by bombs. Seven people were injured, 10 people were rescued from the affected zone. Unfortunately 3 of our compatriots were killed. Search and rescue operations are currently underway.”

The Russians also shelled an oil terminal in the city of Chernihiv in northern Ukraine on March 3. At least 22 people have been killed in a residential neighborhood in Chernihiv, according to the SES, and rescue workers are searching the rubble for more casualties.