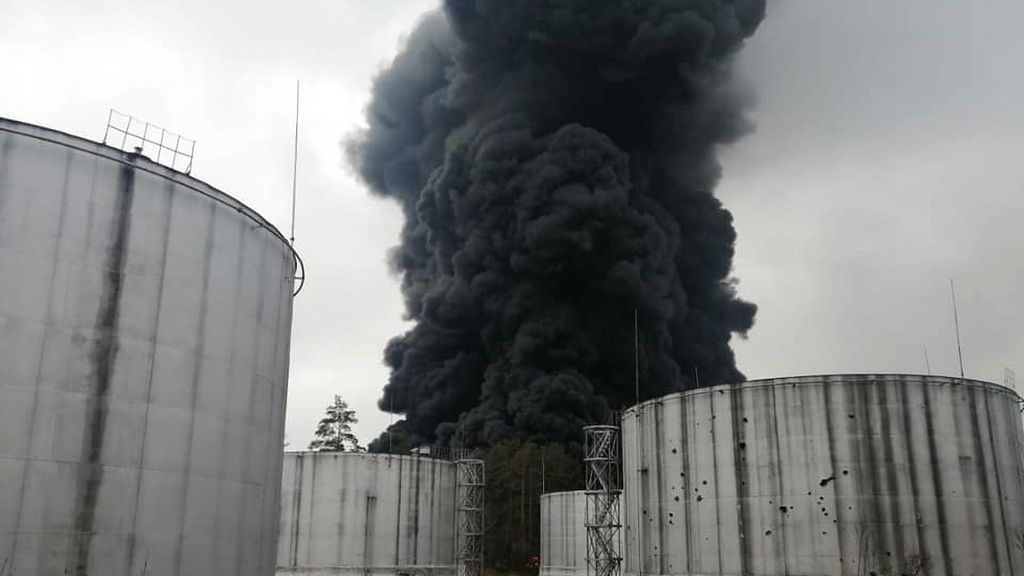 Burning oil smoke rises after Russian forces shelled a terminal in the city of Chernihiv in northern Ukraine on March 3, 2022. (@MNS.GOV.UA/Zenger)

A huge fire broke out after an oil terminal in the city of Chernihiv in northern Ukraine was shelled by Russian forces. The devastation came as at least 22 people had been killed in a residential neighborhood of the city, leaving rescue workers still searching the rubble for more casualties, Ukraine’s State Emergency Service (SES) said.

It said the oil terminal had been hit at around 8:10 a.m. Thursday, sending black smoke high into the sky, visible throughout the under-siege city. The tanks reportedly contained 3,000 cubic meters of diesel fuel.

Nine firefighting teams of 25 people were sent to the depot to extinguish the flames as information on the victims and injured was still being clarified, the SES said. It warned that the number of casualties could grow as rescuers search the debris. The city’s mayor said he was struggling to organize safe passage for civilians.

Firefighting and emergency rescue crews have been working at a frantic pace across parts of Ukraine as Russia has stepped up its missile and bomb attacks in a war now in its eighth day.

The war in Ukraine and fears of supply disruptions have driven oil prices to their highest in nearly a decade, and natural gas prices reached record levels this week.

The 13-member Organization of the Petroleum Exporting Countries and its partner countries declined to increase their production more than expected as the Ukraine-Russia war rages on. The higher prices at the pump are helping fuel galloping inflation in many countries.

U.S. President Joseph R. Biden Jr. had warned Vladimir Putin in his State of the Union address Tuesday night from Washington that the Russian leader had “no idea what’s coming.” And major energy companies Shell and BP have now said they were curtailing their Russian operations. Russia’s oil and natural gas activities, including exports, make up 36 percent of Russia’s federal budget revenues, according to the U.S. Energy Information Agency.

Fuel is one of many supply problems now facing ordinary Ukrainians as well as their country’s military.

The head of the U.S. Agency for International Development (USAID) said humanitarian organizations must be given access to Ukrainian population centers to deliver needed aid.

“The big issue of modern conflict — as you know in places like Syria, Yemen, elsewhere and Ethiopia most dramatically — is access,” Samantha Power said in Washington.

“It’s just authorities or those who have a monopoly on violence in a particular area or having a military advantage denying humanitarian access. And so that cannot happen in this instance.”