The accidents shut down 18 miles of the highway and resulted in at least three casualties Thursday morning.
By Allison Finch March 3, 2022
Facebook
Twitter
Linkedin
Email 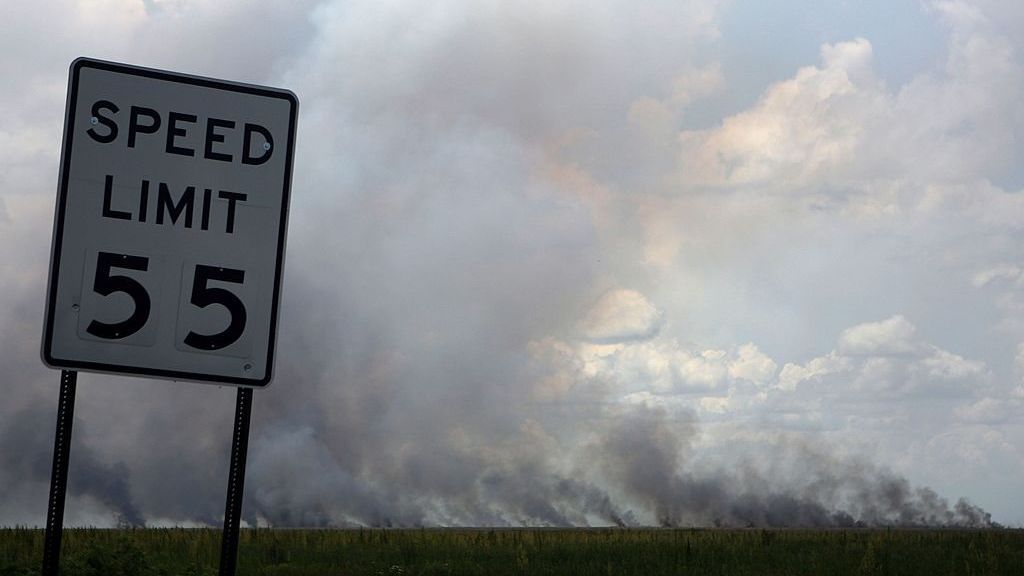 A fiery explosion and accidents involving more than a dozen vehicles on March 3 in Edgewater, Florida, were the result of a super fog that may have been caused by a prescribed burn in the area overnight. Super fog forms when smoke and moisture released from the burning vegetation mixes with cooler, nearly saturated air. File photo: Fires burn in the Florida Everglades in Everglades City, Florida. (Marc Serota/Getty Images)

A fiery explosion was captured on a Florida Department of Transportation camera during the early morning hours on Thursday. The terrifying scene came from early morning accidents involving more than a dozen vehicles on Interstate 95 near Edgewater, Florida, which is just northeast of Orlando.

The accidents shut down 18 miles of the highway and resulted in at least three casualties Thursday morning. According to troopers, the main contributing factor to the crashes was likely the result of what’s known as “super fog,” which may have been caused by a prescribed burn in the area overnight.

We’re following a tragic scene this morning in Florida. Officials confirm five separate crashes, involving 15 vehicles, happened at the same time on I-95 in Edgewater, killing at least 3 people. Children are among those injured.

“Super fog forms when a mixture of smoke and moisture released from the damp smoldering organic material such as brush, leaves and trees, mixes with cooler, nearly saturated air,” said AccuWeather Senior Meteorologist Paul Walker. “Visibility is lowered to less than 10 feet. Under light wind conditions, super fog meanders through low-lying terrain such as creek beds, drainage ditches and canals. It often lingers until a breeze picks up.”

“This is a phenomenon that happens throughout central Florida with our weather,” Lt. Kim Montes, a spokesperson for the Florida Highway Patrol, said in a news conference.

The terrain in Edgewater is among the lowest in the entire county of Volusia, standing at only 3 feet above sea level, making this a common area where fog develops.

In a news conference, the Florida Highway Patrol confirmed that four separate crashes involving 11 vehicles occurred at 1:30 a.m. local time on the northbound lane of I-95 near mile marker 244. Of these four crashes, one person died, and multiple others were taken to a nearby hospital, including a child who is in stable condition.

On the southbound lane of I-95, there was one crash involving four tractor-trailers, a van and an SUV. Two people were pronounced dead at the scene and a couple of the tractor-trailers burned down in the crash, according to officials.

The tractor-trailer explosion was seen on a Florida Department of Transportation camera lighting up the dark night sky with red flames.

BREAKING: 3 crashes on I95 N & S in Volusia County
– 3 people are dead
– Several airlifted to hospital

One of the crashes was this semi truck. It caught fire and led to an explosion.@FHPOrlando investigating.

Interstate 95 is a north-south highway route along the U.S. East Coast, running from Maine to South Florida.

According to Florida Highway Patrol, the drivers who were able to talk to officials said that the visibility suddenly dropped to zero and they could not see inches in front of their vehicle.

“Some of those drivers pulled off in the shoulder, and some stopped in the road and that is where we had our chain-reaction crashes happen,” Montes said.

I-95 will be shutdown most of the day in South Volusia and North Brevard counties, because of at least 5 crashes. This is footage of one of the fatal crashes. 2 people died in this wreck. @FHPOrlando blames thick fog overnight. Watch @wftv for more. pic.twitter.com/C4BmwjLD8I

“Our goal is to always stay on top of that and monitor these types of fog and smoke issues so that we can try and be on top of that,” said Montes.

A dense fog advisory was issued for the area until the mid-morning hours on Thursday. After 9 a.m. local time, the fog began to lift in the area.

Interstate 95 will likely remain closed while the Florida Highway Patrol investigates the accidents, according to the Florida Department of Transportation.

“It is a reminder for anybody driving, especially in the overnight hours when we seem to have this problem, is that if you come upon this sudden smoke and fog mixture … the best thing to do is to activate your hazard lights, turn off your radio so you can hear, use the roadway markings as your guide if you cannot see the roadway and if you feel unsafe driving, pull off the road completely and then that way you’re not in the travel lane,” said Montes.

One of the worst accidents in U.S. history, a devastating pileup collision involving nearly 100 vehicles, was also blamed on a super fog event that occurred on Dec. 11, 1990 in Tennessee.