Sun’s Coronal Loops May Just Be An Optical Illusion 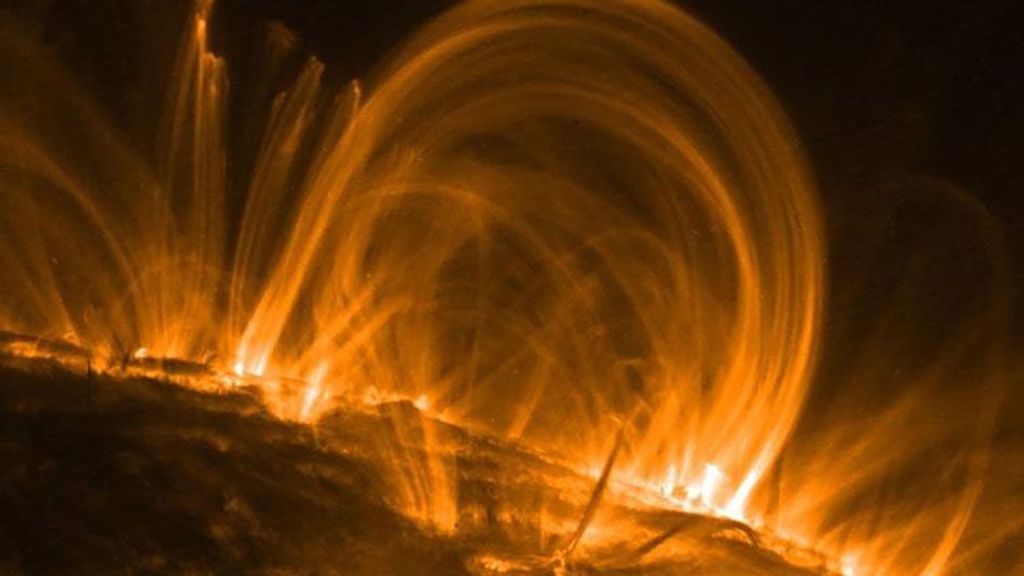 Coronal loops, emerging from the sun's surface, are captured in an image from the Transition Region and Coronal Explorer Spacecraft. TRACE was the third spacecraft in NASA's Small Explorer program and last transmitted to Earth in 2010. According to a new study, at least some of the coronal loops captured in images may just be optical illusions. (NASA/TRACE)

Scientists’ assumptions about strands of plasma looping around the sun are being challenged by a study providing new information on the solar atmosphere.

Coronal loops, which have long been thought to be strands of plasma in the sun’s atmosphere, may actually be optical illusions, according to research published in The Astrophysical Journal. Researchers at the National Center for Atmospheric Research (NCAR) conducted a 3D simulation of the corona — the solar atmosphere’s outermost layer — which allowed them to identify individual coronal loops.

On finding some coronal loops, they discovered that what had appeared to be loops in images of the sun are really just wrinkles of glowing plasma in the sun’s atmosphere. When sheets of plasma fold upon themselves, they resemble thin, brightly shining lines that mimic the way self-contained strands of plasma look.

“I have spent my entire career studying coronal loops,” said lead author Anna Malanushenko of NCAR. “I never expected this. When I saw the results, my mind exploded. This is an entirely new paradigm of understanding the sun’s atmosphere.”

The study team believes that their “coronal veil” hypothesis could significantly change the heretofore accepted understanding of the sun. For decades, coronal loops were used by scientists to infer the characteristics of the solar atmosphere, including its density and temperature.

“This study reminds us as scientists that we must always question our assumptions and that sometimes our intuition can work against us,” Malanushenko said. To determine which coronal loops are actually optical illusions, carefully designed observational methods and new data analysis techniques will be needed, the researchers said.

What is known about magnetism on Earth informs scientists’ assumptions about coronal loops. Schoolchildren have long been shown that when iron filings are sprinkled around a bar magnet, the filings orient according to the magnetic fields that loop from one end of the magnet to the other. These lines spread out and become less dense as they get farther from the magnet.

Although the new study confirms that such loops likely exist, the loops have never behaved as they should, based on what is known of magnets. While magnetic lines on the sun would be expected to spread apart as they move higher in the corona, the plasma trapped between the field lines should spread out between them and create thicker, dimmer loops. But this doesn’t happen. Instead, the loops farther out appear thin and bright.

Understanding the loops as wrinkles in a coronal veil, the study suggests, would explain the loops’ behavior. But the study’s authors raised new questions, too. What determines the shape and thickness of the folds? How many of the apparent loops in images of the sun are actual strands of plasma and how many are optical illusions?

The team produced an extremely detailed simulation of the solar corona, using an innovative radiative magnetohydrodynamic model, which refers to the magnetic properties of electrically conducting fluids such as plasma. The model allowed scientists to simultaneously model events in multiple regions of the sun.

These ranged from the upper convective zone about 6,200 miles below the sun’s surface and up through the surface and 25,000 miles into the corona. These regions exhibit vastly different characteristics, including pressure and density, which scientists had not previously represented mathematically in a simulation.

In a novel development, the study’s authors visualized how solar flares develop from a swelling of energy beneath the sun’s surface to its final burst of explosive energy. They also produced 3D data sets of the sun’s magnetic field and plasma, allowing them to dissect overlapping structures of plasma loops with “synthetic” observations of the solar atmosphere. This had not been possible with other instruments and observatories.

“We know that designing such techniques [will] be extremely challenging, but this study demonstrates that the way we currently interpret the observations of the sun may not be adequate for us to truly understand the physics of our star,” Malanushenko said.