NASA’s Curiosity Rover May Have Spied A Martian Flower 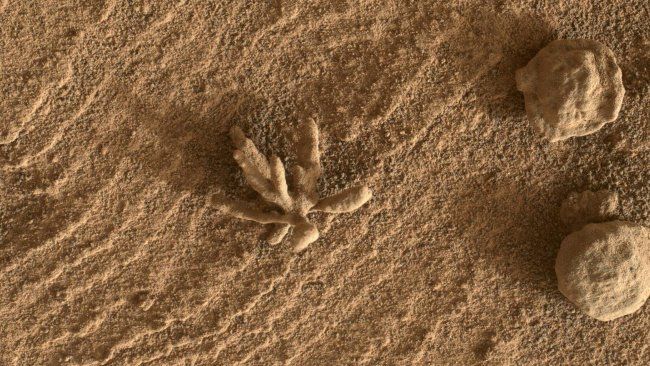 This photo, released by NASA, shows Curiosity's view of the flower and other small structures formed by Martian water (NASA)

You might not be able to find a real flower on Mars anytime soon, but NASA’s Curiosity Rover seems to have stumbled upon the next best thing.

While investigating Martian rocks in Gale Crater, Curiosity snapped a photo of a penny-sized rock formation that looks like a piece of coral or a small flower. The discovery, which was made on Feb. 24, 2022, shows that there is still much to discover on the red planet, with Curiosity having spent more than 3,400 sols, or Martian days, on the planet.

According to NASA, the flowerlike rock and the other formations nearby were formed when minerals carried by water cemented the rock, something that likely occurred in the ancient past.

The impressive high-definition photo was taken with Curiosity’s Mars Hand Lens Imager, a camera located on the end of its robotic arm. According to NASA, Curiosity has snapped nearly 900,000 photos during its near-decade on Mars.

Curiosity was launched from Cape Canaveral in November 2011 to help discover whether Mars could have ever supported microbial life on its now dusty and dry surface. In conducting its investigations, Curiosity has traveled a surprisingly short distance, traveling just under 17 miles, according to NASA.

As of March 2, Curiosity was climbing challenging, rocky terrain in the crater as it continues to explore the area known as the Greenheugh Pediment.

Later this year, Curiosity will celebrate 10 years on Mars, after having landed on the planet on Aug. 5, 2012. It has been exploring Gale Crater ever since, having affirmed that the planet could be habitable sometime in its distant past, according to CNN.

Gale Crater is a 96-mile-wide impact crater, with a towering 18,000-foot mountain in its middle. Scientists believe that about 3.7 billion years ago rivers fed by rain or melting snow also flowed into the crater, forming a large Martian lake.

As the rivers poured sediment into the lake, layers of gravel, sand and silt helped preserve Mars’ history, something Curiosity has been working hard to uncover.

Gale Crater is located in the southern hemisphere of Mars, not far below the equator. Throughout the course of the year, temperatures there differ widely, ranging from 130 degrees below zero Fahrenheit to 32 °F (-90 °C to 0 °C), according to NASA. As of early March, like it is here on Earth in the Northern Hemisphere, Gale Crate is in the home stretch of winter.

High temperatures in Gale Crater had been on the chilly side, with daily high readings ranging from the mid-teens to mid-20s from mid- to late February. According to weather observations from NASA, the day the Martian flower photo was taken, Gale Crater reached a high of 25 degrees F, and the low temp bottomed out at 94 degrees below zero.

Curiosity has been busy on Mars, having tracked gigantic dust storms, capturing footage of Martian clouds drifting overhead and discovering some of the building blocks of life.

Life on Mars has become less lonely for Curiosity over the past year after the American rover Perseverance and a new Martian helicopter named Ingenuity landed on the planet in 2021.

Both of these newcomers to the red planet are exploring the Jezero Crater, which NASA scientists believe was once filled with water and home to an ancient river delta. Jezero is more than 2,000 miles from Curiosity’s landing site in Gale Crater.