Once Alan Bentley got his diagnosis, he started a treatment that allows him to walk without pain.
By Josh Brady March 3, 2022
Facebook
Twitter
Linkedin
Email 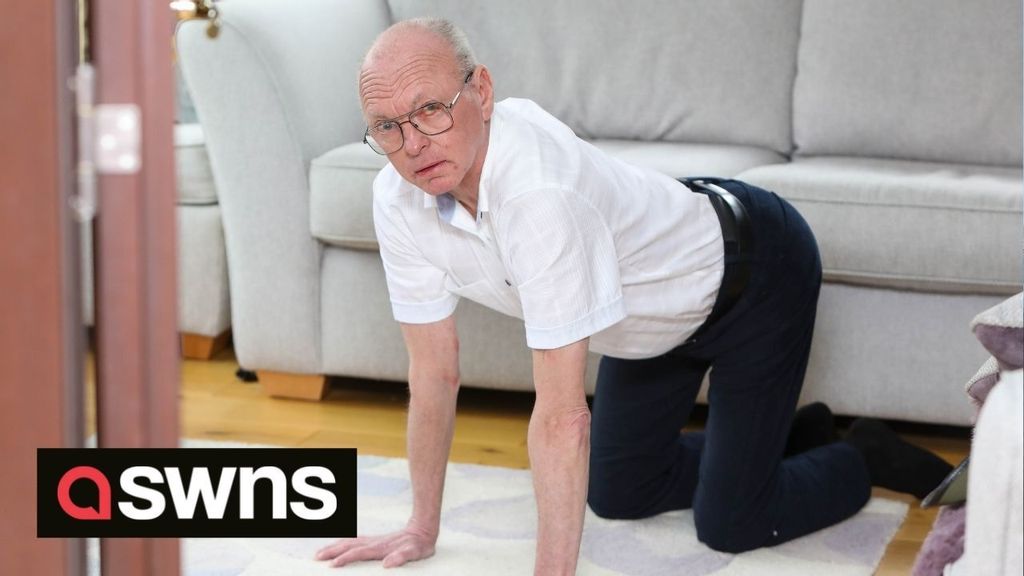 Alan Bentley suffered with a rare skin disorder until a genetic test led to new treatment and a new life. Olmsted Syndrome, which causes hard callouses to form on his feet, has caused him physical and mental pain all his life, forcing him to crawl in his home. (SWNS)

A man living with a rare skin condition says he has suffered so badly, he considered suicide in his 20s.

Alan Bentley, 63, has had Olmsted Syndrome, which causes hard callouses to form on his feet, since childhood.

The disorder has caused him physical and mental pain all his life, forcing him to crawl in his home. Outside, he can’t stand in a line, and the pain is constant. “The soreness when you put your feet down is unbelievable, from the moment you get out of bed. I’d go down the stairs backwards on my knees,” he said.

Olmsted Syndrome causes thick skin to grow in areas like the palms of the hand, soles of feet and around the eyes and mouth. The condition worsens over time, causing abnormalities in joints and nails, and increasing the risk of developing painful infections and skin cancer.

Bentley got a formal diagnosis nine years ago through a genomics test and finally started on a treatment that works for him.

He wants to raise awareness of the relief his diagnosis brought him, and urges others to get a test. His goal is to see people diagnosed correctly and given proper treatment.

“My life is worthwhile if I can just help people,” he said.

His father also suffered with the condition, but was relieved when his three children were born with no visible symptoms.

However, as Bentley grew, hard skin started to appear on his feet, and by the age of 10, they were covered in callouses. He never let anyone see his feet, but was plagued with additional symptoms, such as thin hair with bald patches, which meant enduring torment from peers.

The stepdad-of-two said: “I couldn’t play football [soccer], and I loved football. I couldn’t do anything like that. It made me depressed and gave me a great feeling of isolation.”

During the summer, the hot weather made life more difficult, and Bentley would crawl in the house to take the pressure off his feet. “There was very little flesh on the heels and on the ball I had these massive callouses. They could grow up to virtually an inch thick,” he said.

“It was a really miserable existence in many ways, but I just had to get through it.” Until he was 11, he attended chiropody appointments every six weeks to have his callouses removed, using a scalpel or razor without an anesthetic. The relief was momentary, but he couldn’t bear having his feet touched.

After leaving school, he worked in an office, so he could sit most of the time. He never had children to avoid passing on the disease. At 25, the yard manager at a fencing company was drinking heavily and even contemplated suicide.

Over the years, he was treated by dermatologists with different medications that at best provided temporary relief. He learned to trim his calluses himself using cod liver oil to manage the inflammation and pain.

In 2013, his wife’s mother showed him a YouTube video about a different but similar genetic condition, which prompted Bentley to get a genetic test.

After sending off a saliva sample, he received his diagnosis of Olmsted Syndrome and just last year, started taking Erlotinib, a drug previously used for pancreatic and lung cancer.

Within 24 hours of taking it, he went from crawling through his house to being able to stand and walk. He said: “That wasn’t just a breakthrough, that was a nuclear bomb going off. It was absolutely wonderful. My hopes had been dashed time and time again, but it was like, wow, we’re getting close here.”

The morning after taking the pill for the first time, Bentley walked half a mile. And the following morning, his feet did not hurt. “For the first time since the age of eight or nine, I could walk without major discomfort.”

Even though there is no cure for his syndrome, Bentley believes his diagnosis via genomic testing has changed his life after over 40 years of uncertainty.

He wants others to know about his success and to seek a test if warranted. He believes more diagnoses open up opportunities for research and a greater understanding among patients and medical professionals.

He said: “Faced with such a situation either makes or breaks people. I have come through it and have kept fighting — and it is now my crusade to stop others from suffering.

“It’s so important that medical professionals and people suffering from conditions like Olmsted Syndrome know that getting your genome sequenced is essential — identifying the appropriate genes can be the pathway to a diagnosis, receiving the right treatment and improving people’s lives.”

Professor Edel O’Toole, a professor of molecular dermatology at the Queen Mary University of London, said: “For anyone with a rare genetic skin disorder, getting a genetic diagnosis is important. Although having a genetic diagnosis may not produce the opportunity for an instant cure, there are a lot of researchers working on rare skin disorders and new treatments will become available.

“Although the disorder that Alan has is rare, knowing his genetic diagnosis allowed prescription of a drug, which was truly transformative for the pain in his feet and other symptoms.”

O’Toole said the new NHS Genomic Medicine Service and the mainstreaming of genetic testing to specialists that see the patients, such as dermatologists, will allow more rare skin disorder patients to get a genetic diagnosis.