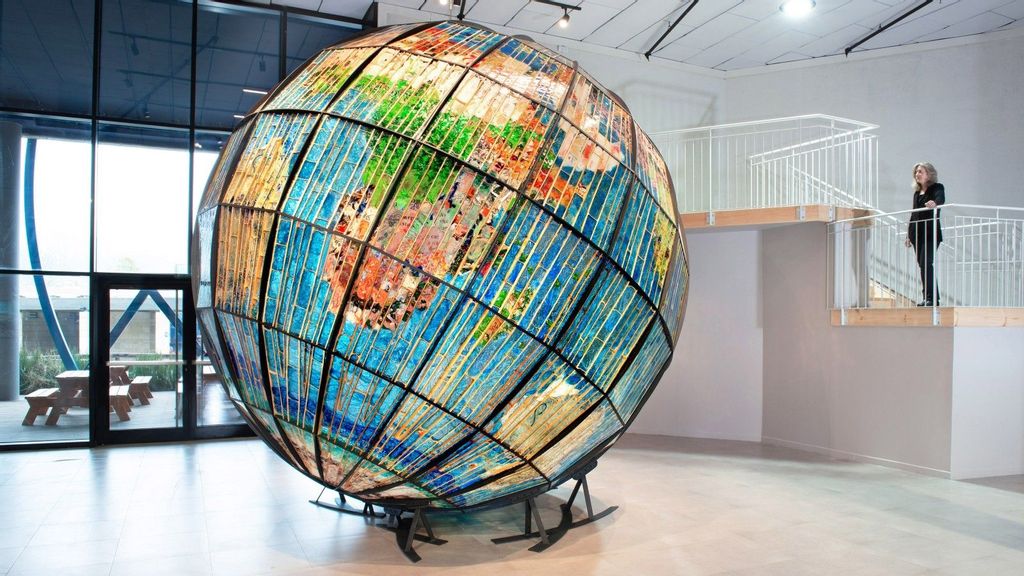 Beverly Barkat viewing her Earth Poetica installation at the Gottesman Family Israel Aquarium, where it is being exhibited before moving to its permanent home at the World Trade Center in New York. (Michael Amar)

Over the past three years, the 50-something installation artist has instead collected multicolored plastic trash from beaches and forests in several countries.

The glassy outer shell looks “like a beautiful jewel that pulls you in, and when you get closer you actually see each piece of plastic.”

The interior is raw, “so that you can put your head inside and see the naked truth of what’s happening.”

Following temporary exhibitions in Israel and other countries, the four-meter sphere will stand in New York City’s World Trade Center as a striking call to action.

“I saw a documentary on children in Asia digging on beaches covered with plastic waste. That image torments me,” says Barkat, Zooming with ISRAEL21c from her Jerusalem studio.

“You would never put a plastic bag over your head, but that’s what we are doing. We are suffocating Earth with our plastic. If we don’t change how we make decisions, in an organized communal way, this is the future we will leave our children and generations to come.”

She envisions Earth Poetica as a “powerful and moving” artwork capable of motivating change.

“The name comes from ‘Ars Poetica’ — poetry about poetry. This is Earth about Earth, the Earth telling the story itself.”

We are all connected

About three years ago, Barkat was commissioned to create a lobby installation by the owners of the World Trade Center.

“Because of the amazing location, I needed it to be a meaningful art piece. I decided to use plastic waste because I was already thinking about this problem,” she says.

Every bit was meticulously organized so that its place on the globe wouldn’t be in its country of origin but rather somewhere else.

“Nature is just one intertwined network. If you create plastic waste in your country, it will travel beyond your country. We think that if we put a border between countries that solves the problem, but it doesn’t. Covid closed down our borders and yet corona was able to penetrate,” says Barkat.

“We must understand that we are all connected.”

As she fashioned 180 trapezoidal and triangular “slices” of the globe framed by metal and bamboo, Barkat felt a pull to display the monumental work in Israel, where she’s lived since the age of 10.

Her clients at the World Trade Center, she says, “have a lot of passion about making change and so they were thrilled about having Earth Poetica exhibited elsewhere first.”

Earth Poetica will be unveiled on February 6 in the Gottesman Family Israel Aquarium in Jerusalem, where it will remain for at least half a year.

“They are building an educational program around it,” Barkat says.

The globe will help visitors understand the devastating effect of litter on marine life. Many creatures suffocate after ingesting plastic bags that they mistake for food such as jellyfish. Sea turtles lose limbs after getting tangled in nylon fishing nets.

“Showing at an aquarium isn’t intuitive for an artist,” notes Barkat.

“But there are so many children who visit the aquarium, and so many people who don’t go to museums. At the aquarium they are being exposed to art and will be educated to know they need to care about this issue.”

Curators in several other countries are interested in exhibiting Earth Poetica before it reaches its permanent home.

And what about all the leftover plastic in her studio? “I’ve been approached by two people already to create something for communal and private gardens,” says Barkat.