The UAE, along with other Gulf states, had previously adopted a neutral position on the conflict between Russia and Ukraine.
By Virginia Van Zandt March 2, 2022
Facebook
Twitter
Linkedin
Email 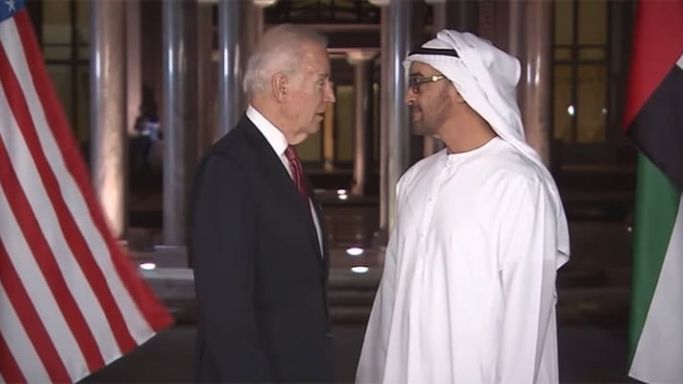 Russian rockets and artillery shells have struck civilian neighborhoods in Kyiv, Ukraine’s capital, and Kharkiv, it’s second-largest city, while Russian tanks have demolished villages and suburbs in across Eastern Ukraine — forcing hundreds of thousands of civilians to flee. Many have found shelter inside their homeland, where Ukraine’s besieged government desperately tries to feed and house them. Tens of thousands of civilians — mostly women and children as combat-age males are temporarily barred from leaving the country by Ukraine law — have escaped into Poland and other neighboring Western countries. Those refugees represent a growing humanitarian crisis for European democracies and the United Nations is stepping in to help.

“Being from the Middle East, we are intimately aware of the critical importance of a stable regional security environment, and of de-escalation, diplomacy, and dialogue,” said Lana Nusseineh, UAE representative to the U.N. at a security council meeting.

Some 500,000 people have escaped Ukraine since Feb. 24 when the invasion began, according to U.N. estimates. Poland, Slovakia, Hungary and Romania have opened their borders to those fleeing the crisis. Long lines of cars, buses and taxis have formed at the Polish frontier, while refugees on foot continue to stream in. Many walked for miles over snow-packed, wind-blown plains.

“I have never seen such an incredibly fast-rising exodus of people — the largest within Europe since the Balkan wars,” said U.N. commissioner for refugees Filippo Grandi during a U.N. security council meeting.

The UAE, a temporary member of United Nations’ Security Council, is one of the first Arab nations to donate funds to the U.N. for Ukraine’s growing throng of refugees.

The UAE contribution will go to the United Nations’ Humanitarian Flash Appeal and the Regional Refugee Response Plan. The donation is a “reflection of the UAE’s emphasis on humanitarian solidarity in conflict settings,” according to an official statement issued by the UAE’s Ministry of Foreign Affairs and International Cooperation.

Importantly, the aid seeks to help Ukrainians gain safe passage out of the war zone and into safe zones in neighboring lands, where food, shelter and medicine can be provided.

Russian President Vladimir Putin announced a “special military operation” on Feb. 24. Columns of tanks and trucks snaked for miles down Ukrainian country roads and highways while rockets rained down on both military and civilian targets.

Many Ukrainian civilians have lined up to receive AK-47s and SKS carbines from their local governments in order to fight the Russian invaders. Most have little or no combat experience.

Ukrainian President Vlodymyr Zelensky has stayed in Ukraine’s capital to share the fate of his fellow countrymen, turning down an offer of safe haven in the United States.

Ukraine’s Ministry of Interior said that at least 325 civilians have been killed so far, 14 of those being children. Another 1,684 people have been injured.

NATO countries have condemned Putin’s actions, and sent millions of dollars worth of weapons to Ukrainian soldiers. Even formerly neutral countries like Switzerland, Sweden, and Finland have joined sanctions against Russia in reaction to its invasion of Ukraine.